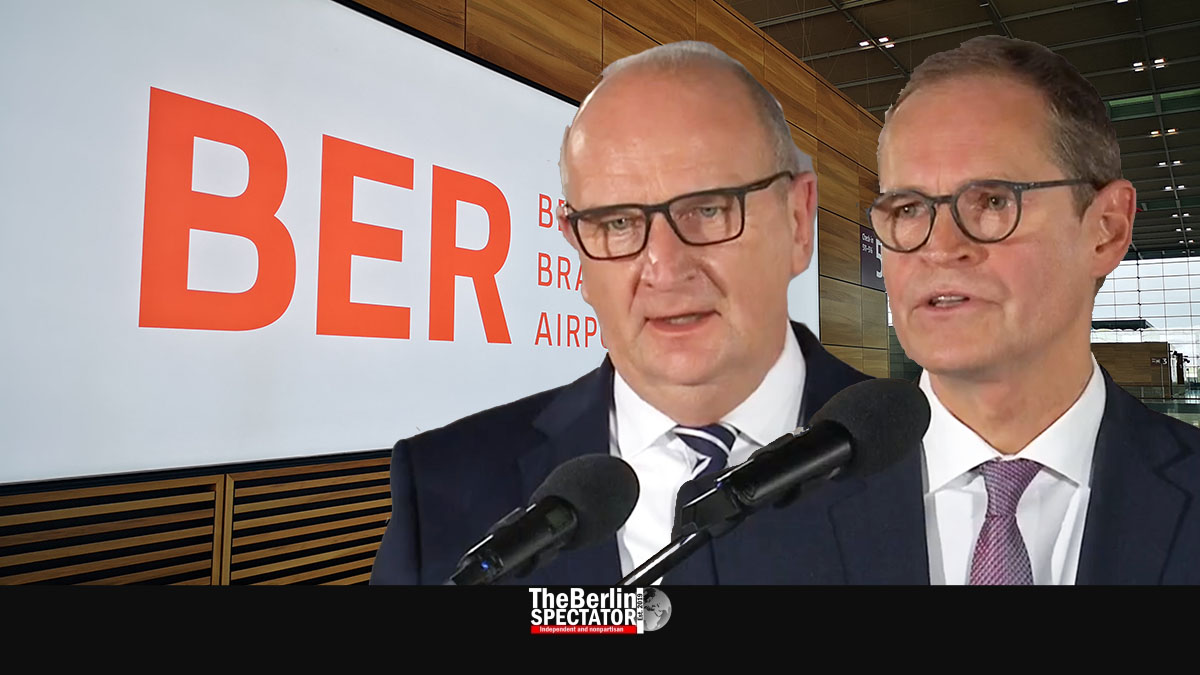 Berlin, October 31st, 2020 (The Berlin Spectator) — The birth of an airport is a special event, even if it happens almost nine years late or in the middle of the biggest crisis the Federal Republic of Germany has seen. BER Airport’s CEO Engelbert Lütke-Daldrup, who celebrated his own birthday as well, got the best presents ever, namely an inaugurated airport and prominent speakers.

Because of the embarrassing delay BER Airport is known for in the entire world, there was no big inauguration party. But there a little event did take place once the first aircraft had landed on Saturday. First, an EasyJet flight arrived, minutes before a Lufthansa jet touched down. The two airlines’ CEOs, Lufthansa’s Carsten Spohr and EasyJet’s Johan Lundgren were there as well.

For BER Airport itself, Engelbert Lütke-Daldrup stated, it had everything an airport needed. He said passengers and airlines had four times as much space as they had had at the old airports in Tegel and Schönefeld. The German capital, Bandenburg province and all of eastern Germany now had an airport that lived up to the international standard. It was an important guarantor for economic development in the region.

The new airport has three owners, namely Brandenburg, Berlin and the Federal Republic of Germany. For Brandenburg, the state’s First Minister Woidke said, this was the first day of a success story. Of course, BER’s history had been too long. “But I was always convinced this airport would be important for the region, and that it would be completed”, Woidke stated.

He said there would be challenges and mentioned protesters in front of BER who were rallying against CO2 emissions caused by aviation. “We can make sure flying will be climate-neutral”, Woidke told the participants of today’s event at the new airport. This was a challenge for everyone.

Woidke said he wanted BER Airport to become more intercontinental in the sense that it should have more flight connections to destinations on other continents. In Germany, the airports in Frankfurt, Munich and Düsseldorf had far more connections of that kind before Corona turned aviation into lasagna because they were designed as big hubs for thzat purpose before the reunification.

Governing Mayor Müller said the new airport was very different from the one that had been planned many years ago. For instance, it provided more space for the airlines and passengers. Müller predicted BER’s esthetics and architecture would mesmerize passengers.

Michael Müller conceded it was not easy to inaugurate an airport during the Corona crisis. But, with BER, the region had a good chance to get out of the crisis stronger. The airport was a future project that provided many opportunities.

Minister Andreas Scheuer said BER had annoyed and disappointed everyone, but now it was an airport with a big significance. He congratulated everyone involved, including Engelbert Lütke-Daldrup. Under this CEO’s watch, the inauguration actually happened when hardly believed in it anymore.

During BER Airport’s little inauguration ceremony, two protests took place. Taxi drivers from Berlin honked their horns because they do not agree with an agreement according to which only 300 of them may service the new airport. The radical organization Extinction Rebellion tried to disrupt flights. Police stopped them.

>> See all of our articles and features about BER Airport and the other airports in the region.