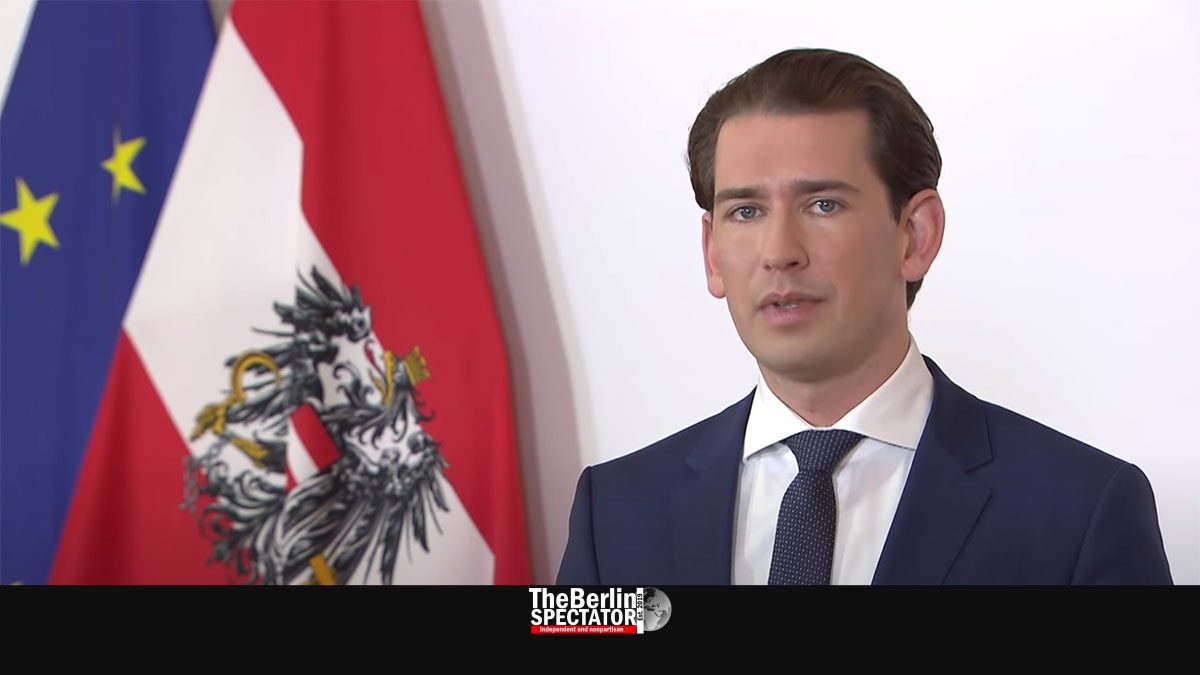 In Vienna, Chancellor Sebastian Kurz announced a lockdown and a ‘visit ban’ that are supposed to get the Corona infection numbers down. The measures will be put in place on Tuesday.

Berlin, November 1st, 2020 (The Berlin Spectator) — Austria is going down a path similar to the one its larger neighbor Germany chose. Sebastian Kurz announced a partial lockdown which will commence this Tuesday, November 3rd, 2020. The measure includes a nightly curfew and is therefore stricter than the partial lockdown the German government announced last Wednesday.

On Friday and Saturday, Austria had reported more than 5,000 new Corona infections per day, about one third of the latest daily infection numbers in Germany. Austria has less than nine million inhabitants. Its northern neighbor has nine times more.

“You know, we are in an intensive second wave in Europe”, Kurz said at a press conference in Vienna. Some neighboring countries already had implemented lockdowns, he stated. Austria was experiencing an exponential growth what Corona infections were concerned, the Austrian Chancellor stated. In the past weeks, the increase had “almost” been explosive. Kurz said there would be “harsh measures”.

With its lockdown, the government in Vienna intends to decrease the infection numbers substantially. Funerals will be the only public events allowed. Cultural ones and public sports occurrences will be banned all month long. All restaurants, pubs, bars and cafés need to close. Like in neighboring Germany, selling takeout food is legal though. Supermarkets and hairdressers will be open during the partial lockdown.

Engaging in sports activities with others will be allowed, as long as there is no physical contact. Kurz said the steps his government had decided to take were necessary in order to prevent gatherings from taking place.

From Tuesday, people from up to two different households may meet in Austria. And there will be a curfew from 8:00 p.m. to 6:00 a.m. every day. From 8:00 p.m., Austrians and residents with other nationalities may not leave their homes without convincing reasons. Kurz called this particular measure a “visits ban”. He explained that most contagions took place among people who knew each other.

Before Kurz’ “harsh measures” can actually be put in place, the main committee of Austria’s parliament needs to approve them. Kurz said he was aware of the fact that the government was restricting people’s freedom a lot. But this step was necessary in order to make sure the intensive care units in Austria’s hospitals would not be overburdened.

Schools and kindergartens will remain open. School kids from first to tenth grade will be taught at their schools, while the eleventh and twelfth grades are supposed to have online classes. All school children in all grades need to wear masks.

Sebastian Kurz, a conservative from the party ÖVP who is ruling Austria with the Greens after his coalition with the extremist right-wing FPÖ failed last year, announced a Corona aid program for businesses. Companies in need are supposed to receive up to 80 percent of the turnover they reported last year. In return, they are not allowed to fire employees.