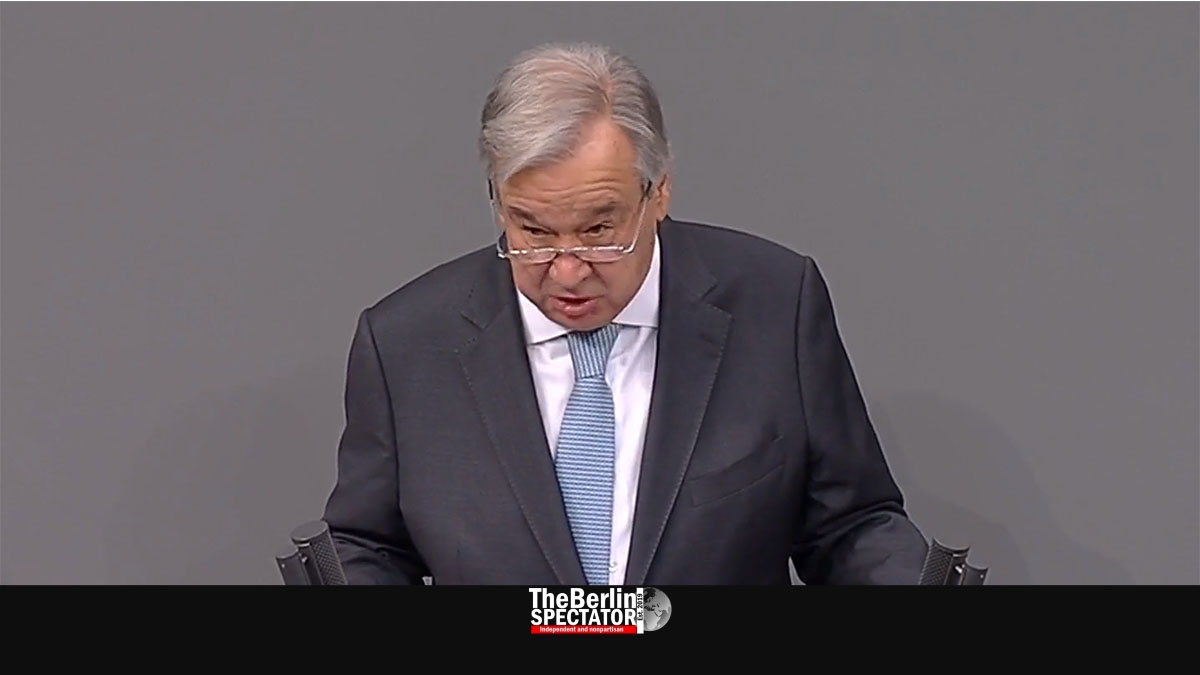 At the Berlin Bundestag, the Secretary General of the United Nations, António Guterres, demanded more international cooperation in this time of challenges. Corona was only one of those he mentioned.

Berlin, December 18th, 2020 (The Berlin Spectator) — António Guterres, who was invited on the occasion of the UNO’s 75th anniversary, surprised the members of the Berlin Bundestag on Friday morning, when he held his entire speech in good German. He praised Germany by saying it had always been there with “its ‘no’ to nationalism, its ‘yes’ to European integration, its ‘no’ to isolationism and its ‘yes’ to international cooperation.”

With its sense of responsibility, Germany played a leading role in the world, the United Nations’ Secretary General said. It was a “power of peace and a pillar of multilateralism.” Guterres also outed himself as an admirer of the German philosopher Jürgen Habermas.

Guterres said the world was put to the test during the year of the U.N.’s 75 anniversary. Corona had turned the world upside down. It had cost 1.5 million lives, the economy had been hit hard. Poverty was increasing, progress regarding equality had been thrown back by years. The world was now confronted with the “biggest economical crisis of our time”, Guterres stated.

He said the weak were suffering. In spite of this situation there was a lack of international cooperation, and a tendency towards isolation in many places, and towards irrationality and hatred, including antisemitism. “History teaches us that politics built on anger leads to catastrophes”, Guterres stated in Berlin.

But there was hope too. The world needed Germany and Germany needed the world, the Secretary General said. He mentioned the country’s fight against the Corona pandemic, its efforts for peace and its actions against climate change. Germany also supported the goal of global healthcare.

António Guterres recognized Germany’s support for the World Health Organization and applauded what he called “the prudent leadership” Chancellor Angela Merkel and her government had shown. He said women had provided more effective leadership in this crisis than men.

Corona vaccines needed to be regarded as a “global public good”, Guterres stressed at the Berlin Bundestag. All people needed to have access to them, and they needed to be affordable. He also demanded action against misinformation. The United Nations were working on creating trust in vaccines.

Guterres said the plight of people in developing countries needed to be alleviated. In order to “make room for diplomacy”, he reiterated his call for a worldwide ceasefire in all conflicts. Germany had supported the demand, he stated. And he thanked Mrs. Merkel for the Libya conference Germany organized in January of 2020.

Germany was an indispensable partner when it came to maintaining peace, Guterres said. He asked the government to stick to that role. The country had contributed to the protection of human rights and needed continue to do so.

Global warming was another problem Guterres mentioned. Ecosystems were disappearing, he said. Until the end of this century, temperatures would increase by 3 degrees if nothing was done. “This is a catastrophe”, António Guterres stated in Berlin. He thanked the European Union for its dedication to ambitious goals in this regard.