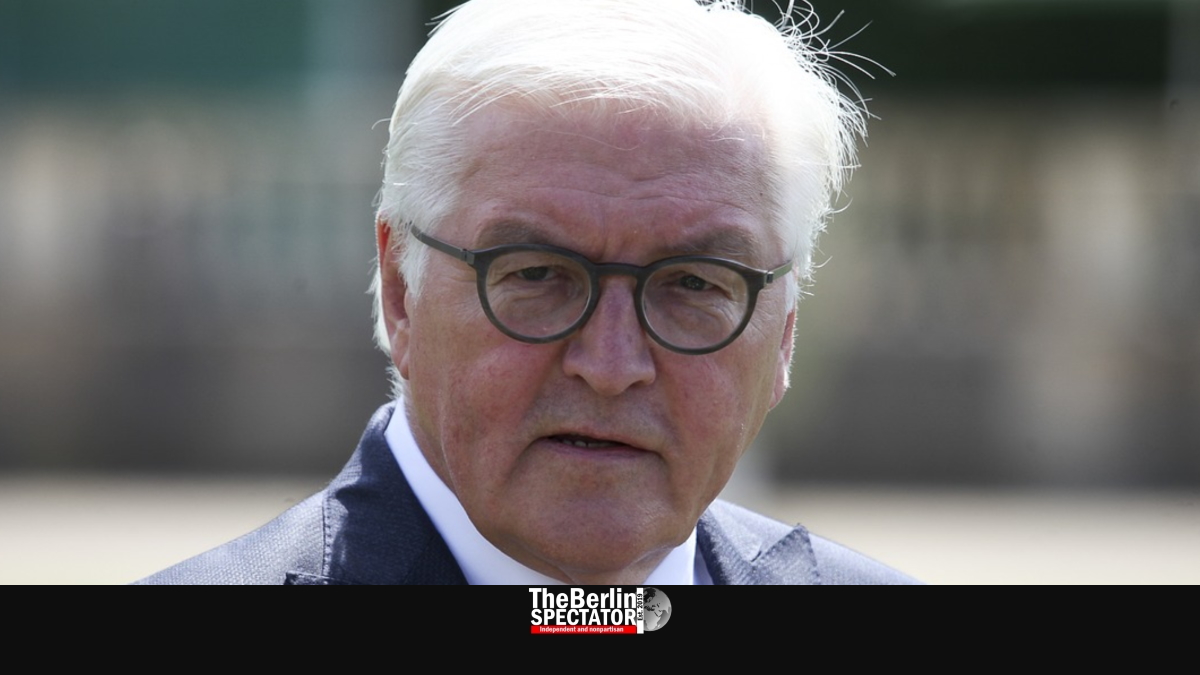 On the first anniversary of the Hanau attack, Germany’s President Frank-Walter Steinmeier took part in a commemoration event. He said the state had been unable to fulfil its pledge to provide protection to the victims.

Berlin, February 19th, 2021 (The Berlin Spectator) — In Hanau, Frank-Walter Steinmeier took part in a commemoration event for the victims of the Hanau attack, in which a racist shooter killed nine people a year ago today. On February 19th, 2020, Tobias R. shot nine persons with immigrant backgrounds at two Shisha bars in the city center. Later, he killed his mother before he committed suicide.

In front of of the victims’ next of kin and other participants, Steinmeier stated it was difficult for everyone to face up to the pain and grief once more, on this day. “First and foremost, however, that applies to you, the families and close friends of those murdered and injured in the attack. […] You have all lost someone who belonged to you, whose face and character were familiar to you and were a part of your lives.”

“All of these loved ones were unique, one of a kind. And therefore – even if the victims, and even if you, the families, have been affected by a shared horrendous experience, the grief and loss which each of you feels is unique and quite special”, President Steinmeier said. “That is why we are remembering every single name today, as well as the life stories bound up with each name.”

“And that is why everyone can express their very personal grief here once more, the very personal pain of parting which each and every one carries with them. No one can take away the burden of this pain, no matter how much we support and comfort each other. Of course, we cannot ignore the link between those we are mourning. They were all victims of a perpetrator who, in his murderous delusion, believed that they had something in common”, Steinmeier said in Hanau.

“Every individual whom we are mourning was, in one regard, a random victim because they just happened to be where the perpetrator decided to carry out his deadly scheme. In another sense however, the victims were anything but random. They were the precise target of the perpetrator’s deadly plan because they did not belong here in his hate filled mind.”

For that reason too, this crime had provoked so much horror, Frank-Walter Steinmeier said, especially among all those with a migration background. “As you know, any such individual could have become a victim of this brutal attack. And it is most likely that the perpetrator wanted his crime to be seen in that way. As a red flag, as a declaration of war on the established forms of peaceful co existence.”

Through his environment, through the Internet and social media, the shooter had become acquainted with “a world view by which his own racism, and his “them” and “us” way of thinking, was time and again encouraged and intensified.” This world view, marked by hatred and extermination fantasies, was still being spread day after day, “by misanthropes who know what they are doing”, Steinmeier stated at the Hanau commemoration event.

“Just as the murder of Regional Commissioner Walter Lübcke was not random, or the attack on the synagogue in Halle, these murders were not random either. These crimes stemmed from targeted hatred which encouraged the perpetrators. Hate, racism, abuse directed against Muslims and Jews, supremacy fantasies: All of this is very specifically directed at certain people. People living among us, who belong to us, to our city and our neighborhood, who go to the same school, shop in the same stores and do the same work. The fact that we share so much of our daily routine shows that we belong together – despite our differences.”

“However, the truth is that there are individuals who react to mere diversity with hostility, who live in a world where only their own ideas have a place, who boost their own self worth by denigrating others, for whom it is clear that diversity must be combatted. They seek to hammer these very ideas into our minds through ideology and lies, incitement to hatred and exclusion.”

Frank-Walter Steinmeier said the evil inhumanity that was found on the Internet or elsewhere was “the dangerous toxin of a small minority – but one with an impact.” Time and again, it led people to believe that they had the right to act in the name of a supposed will of the people to humiliate, threaten, chase or even murder others.

“What can be our answer to the terrible crimes committed in Hanau? What must our answer be? Many answers, many good, indeed very good answers have already been given”, the President stated. “Hate and revenge were not among them. For evil is not conquered by evil. Among the good answers, I am thinking, for instance, of the many spontaneous demonstrations and vigils which took place across the country immediately after the horrific reports started coming out of Hanau. “Hanau stands united” was one of the first spontaneous actions which subsequently gave rise to others.

“I know that our reasonable fellow citizens with a heart want to live in harmony side by side. They do not want to differentiate between “them” and “us”. They want an “us” – and they are working throughout our country to ensure that hate and violence, contempt and disrespect have no place here. They are seeking to ensure that all of us can be different without having to be afraid, that we can all live without fear of each other, with one another.”

The name Hanau not only stood for a terrible crime but also for a pleasant city where people knew each other, helped each other and were there for one another, the President stated in his televised speech. “Above all, the initiatives launched by committed members of the public […] and so many other things small and large, as well as the erection and preservation of the memorials for the dead and the graves of honor or the digital memorial on this anniversary today.”

‘We Cannot be Indifferent’

“I know that despite all the good things that have happened, criticism and questions regarding the state’s actions continue to arise”, Steinmeier said. “I am not here as Federal President because I have the answers to all the questions still unresolved. No, I am here because I am deeply saddened that, in the case of your relatives, our state was unable to fulfil its pledge to provide protection, safety and freedom, a pledge it makes to everyone living together peacefully here.”

“I know that this has had an impact on your confidence in this, in our, in your state. We cannot be indifferent to that, for the state needs our confidence. The justice system and police need our confidence. What police officers have to endure and how hard they work, especially in extreme situations, is all too often neither seen nor appreciated. And I want to expressly include emergency doctors and paramedic staff in this.”

‘State is Not Infallible’

President Steinmeier conceded that “not even the state, or all those who have responsibilities within it, are infallible. In no country, and that includes Germany. And wherever mistakes or errors of judgement have been made, they have to be investigated. Investigation and subsequent action are not up to the discretion of those involved. They are the active duty of the state vis à vis the public and, above all, the families of the victims.”

“The confidence lost can only be regained to the extent that the state fulfils this active duty and provides answers to unresolved issues. We therefore have to make every possible effort. The state has an obligation. However, each and every one of us has to play our part, too. Many, very many, show this every day, in the way in which people live side by side without giving it a second thought, or in special initiatives aimed at protecting and nurturing our commonwealth.

‘We Are Not Alone’

“We see and sense that we are not alone”, the President said in Hanau, on the first anniversary of the racist murders. Those who work to foster peaceful co-existence in our society are in the best of company. Anyone who rejects exclusion, any form of exclusion, finds friends, neighbors and fellow citizens who think and act just like them. I assure you that they are the overwhelming majority of people in our country.”

“People of Hanau, friends and relatives, a year has passed. Has the grief faded away now? Has the pain lessened, the anger disappeared? Have all the questions been answered? By no means. Yet, I stand here as Federal President and say to you: Do not allow this evil crime to divide us! Let us not overlook the evil in our midst, the hate, the marginalization, the indifference. But let us believe in the better spirit in our country, in our strength to come together, to be united as one.”

“If we take this message to heart again today and take it home with us, then this act of remembrance and of grief will be an act of hope and faith in the future, for Hanau, for Hesse and for the whole of Germany: our shared home.”

Last weekend, Chancellor Angela Merkel had talked about the Hanau attack. “Racism is Poison, hatred is Poison”, she said.