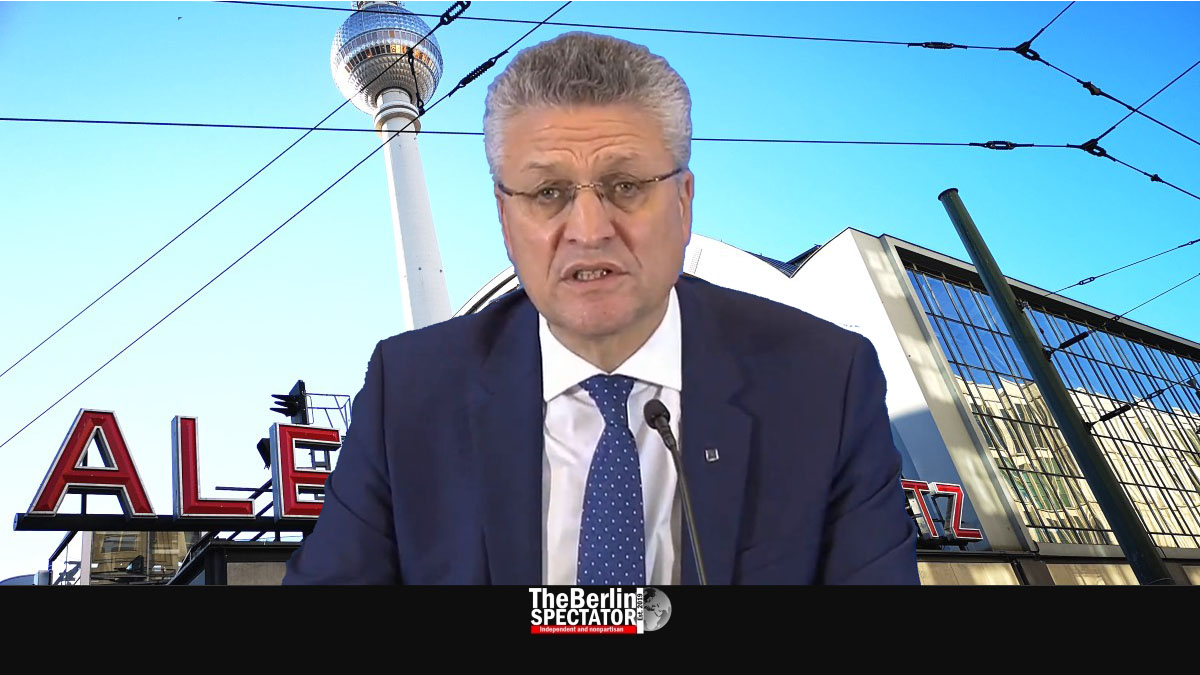 Germany’s infection numbers are increasing at an alarming pace. The Robert Koch Institute reported 22,657 new Corona cases within 24 hours. Its Director Lothar Wieler said lockdowns were the only way to stop the third wave.

Nijmegen, March 25th, 2021. Update: 10:19 a.m. (The Berlin Spectator) — Professor Lothar Wieler is a typical scientist in the sense that he is a no-nonsense person. The Director of the Robert Koch Institute (RKI) in Berlin just confirmed what many do not want to hear: During an online event organized by the German Embassy in Washington D.C., he said the rising infection numbers could only be stopped by lockdowns. There was no alternative solution until a large part of the population was immune against the Coronavirus, he stated.

“We can’t stop this increase, unless we put in place a new lockdown for the country”, Wieler said. No other tools were available to curb the third wave. The RKI believed that 80 percent of the population needed to be immune in order to stop a new Corona wave, Wieler stated. “Until this has been achieved, we will not be safe”, the professor confirmed. Until the vaccination campaign had advanced enough, people needed to wear masks and limit their contacts.

Wieler also mentioned the criticism in regard to the speed of the ongoing vaccination campaign. He said people should be “more than glad” about the fact that there were vaccines at all, a bit longer than a year after the start of the Corona pandemic. Certain German media have accused the government of having created a “vaccination disaster”. Then they slammed Chancellor Angela Merkel for the ongoing lockdown. Since yesterday, she is being criticized for retracting one of many decisions. Holy Thursday is not going to be a “resting day” after all. On Wednesday, Merkel apologized for what she called a “mistake”, and took full responsibility.

In the meantime, the infection numbers are skyrocketing. Four hundred and twenty-two days after the first Coronavirus infection was reported in Germany, the country’s Seven Day Incidence Number hit 113.3. Ten out of sixteen federal states are above 100, Thuringia is even above 200. The number of new infections within the past 24 hours is 22,657, well over 5,000 more than last Thursday.

The speed at which the third wave is hitting Germany becomes evident just by looking at Berlin, where the situation is serious. Three weeks ago, on March 4th, the capital’s incidence Number stood at 61.8. Since, it has almost doubled to 118.2. All of a sudden, all twelve Berlin districts are above 100. The ones with the highest Seven Day Incidence Numbers are Mitte (164.4), Marzahn-Hellersdorf (142.6) and Neukölln (136.4).

At the Berlin House of Representatives, Berlin’s Governing Mayor Michael Müller said, not only Chancellor Merkel, but also the other participants of the Corona conference on Monday had been responsible for the “mistake” that had been made in regard to Holy Thursday. He apologized. In a governmental statement he gave on Thursday morning, Müller rejected calls according to which those regular Corona conferences should be scrapped. He said pretending there was no threat in this country was wrong.

At the Berlin Bundestag, Chancellor Angela Merkel spoke in front of the Bundestag again this morning. She said compared to one year ago, the infection numbers were a lot higher today. At the same time, a lot of headway had been made. By now, each citizen could get tested for Corona at least once a week, but this offer needed to be used. The vaccination campaign was in progress. Mrs. Merkel also said stricter rules would need to be put in place in case the numbers increased even more quickly than they did right now.

Germany’s vaccination campaign is supposed to be sped up in the coming weeks. So far, 7.9 million people have received the first of two required shots, while 3.5 million residents got both vaccinations. What this means is that more people have been vaccinated in Germany than in Israel, which is considered one of the vaccination masters. Of course the percentage of vaccinated inhabitants is a lot lower in Germany. It stands at 9.5 percent (one shot) or 4.2 percent (both required shots). In Israel, more than half the population of 9 million people got the first shot, while 49.4 percent got the second one as well. Germany is more than nine times as large, population-wise.