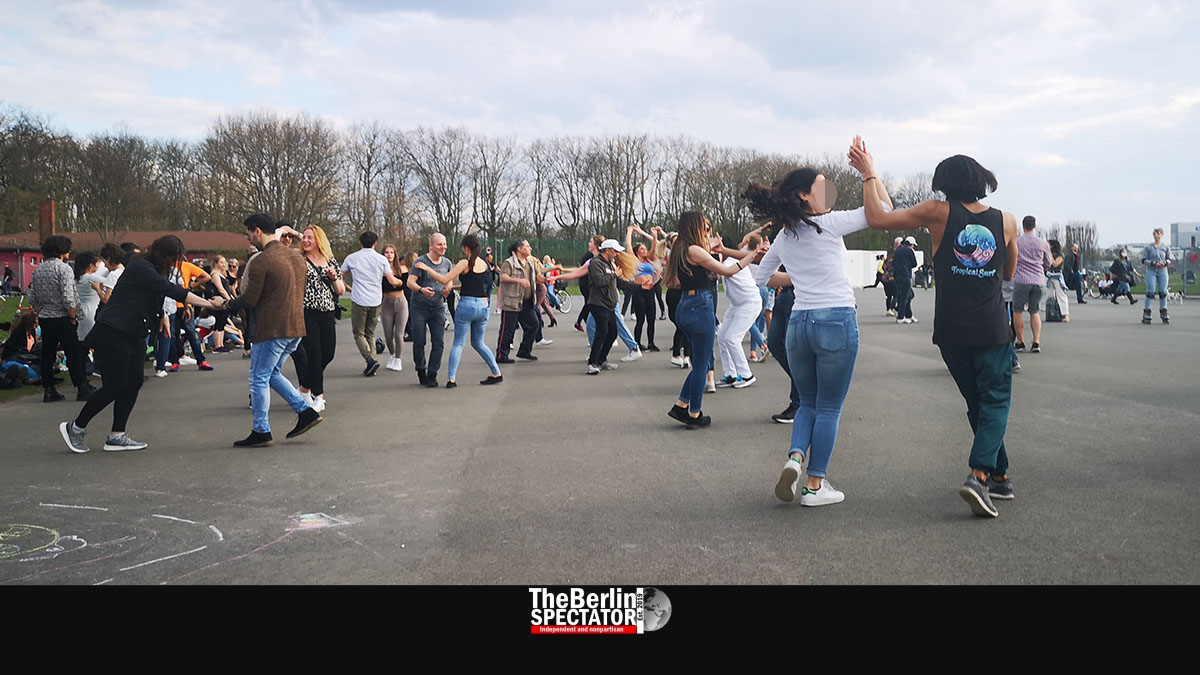 While party people gathered and danced at Tempelhof Airport in Berlin, the infection numbers rose further. This week, the Corona rules in Germany might be tightened substantially.

Berlin, April 12th, 2021 (The Berlin Spectator) — At former Tempelhof airport, thousands gathered on Sunday. Many people who may have been part of the same households got together in small groups, meaning they probably adhered to the Corona rules. But many did not. And masks were hardly worn at all, even though people came close to each other at the entrances to the airfield that was turned into a sports and gathering place in 2008, and at other spots.

Police Do Not React

Close to the south-eastern corner of the former tarmac, some 70 persons were dancing to rhythmically advanced Latin American songs (see main photo above). The dancers were holding each other tight, they switched their partners and absolutely none of them wore masks. Distancing looks very different. As soon as the weather is nice, the endless parties Berlin is known for continue. The warmer it gets and the more the Sun shows itself, the more issues of this kind will pop up.

Around 6:00 p.m., when people started leaving Tempelhof Airport, a police van appeared at one of its gates. The vehicle had several huge loudspeakers mounted to its roof. While the dancing still continued, the officers inside checked the situation. Instead of reminding people of the dangers the Coronavirus poses, and of the rules that were put in place to fight it, they left after 45 minutes.

Generally, the Berlin Police Department does end parties at parks and at this former Berlin airport. The other day, officers were attacked by a mob of intoxicated people when they did. But, on Sunday evening in Tempelhof, they refrained from doing anything to stop the dangerous behavior of some of the thousands of people on site. Even though the danger of getting infected outdoors is relatively low, compared to indoors, embracing each other and dancing — without protective masks — is definitely not a good idea. Berlin is not the only city in Germany that needs to deal with illegal parties and other gatherings.

The numbers speak for themselves. Early this morning, the Robert Koch Institute in Berlin said 13,245 new Corona infections had been reported in the past 24 hours, almost 5,000 more than last Monday. Germany’s Incidence stands at 136.4. This is the level it had been at because the numbers dropped temporarily during the Easter holiday because many cases were not reported then. The total number of Corona infections in Germany since the crisis began 15 months ago is now higher than 3 million.

Two States with Incidences Above 200

Except for Schleswig-Holstein, all federal states are above 100 again. Two of them, Thuringia and Saxony, are even above 200. In the Saarland, where First Minister Tobias Hans had proudly announced a reopening of all retail businesses and even cinemas just before Easter, the Incidence quickly exceeded 100 and stands at 117.6 today.

This week, the federal government intends to amend Germany’s Infection Protection Act with its majority at the Berlin Bundestag. At Incidences above 100, it insists on the right to force counties to take measures by decree. So far, some federal states had not followed the decisions their own First Ministers had taken during those many Corona conferences with Chancellor Angela Merkel.

In the meantime, rallies for tighter Corona rules have become fashionable in Berlin. This past weekend, dozens of protesters at Brandenburg Gate demanded a strict lockdown. Today, another protest of this kind is scheduled in front of the Chancellery. So far, Corona deniers and other conspiracy theorists had teamed up with Nazis countless times, in protests during which they demanded a lifting of all Corona restrictions.