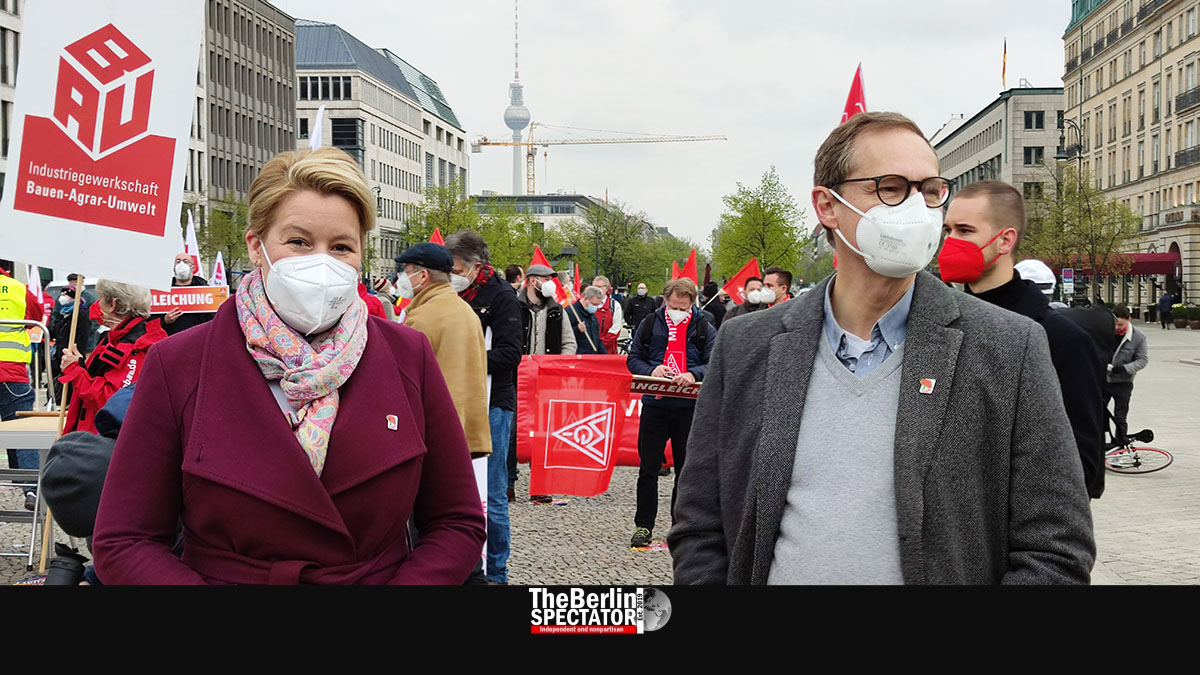 In the German capital, the clock is ticking. The elections for the Berlin House of Representatives will take place in 107 days from now. Voters will have the choice between 38 mostly exotic parties. The SPD has a new problem.

Berlin, June 11th, 2021 (The Berlin Spectator) — At good restaurants with long menus, it it pretty hard to make a choice, especially when absolutely everything they offer is delicious. It will be different on September 26th, 2021, when voters in Berlin pick the party they want to be governed by in the next five years. That is because some of the 38 parties on the list are obviously dangerous. Others are too small to have any chances, meaning picking them might mean wasting votes — at least to the opinion of those who look into strategic aspects too.

A Party for Animal Protection was approved for the elections in September. So was a dadaist Mountain Party, a Hiphop party called ‘The Urban’, the ‘Human World’ party which says it stands for happiness for all, and the Pirates. This is the unconventional category. Then there are extremist parties, both on the far-right and the far-left, including the AfD, the NPD, the German Communist Party (DKP) and the Socialist Equality Party. And of course, the ‘usual suspects’ are on the list. They include the conservative CDU, the center-right, pro-business FDP, the center-left Greens, the far-left ‘Die Linke’ and the center-left Social democrats (SPD).

The SPD has a new problem. And an old one. Their main candidate Franziska Giffey just stepped down from her post as Federal Family Minister because of a plagiarism affair she had tried to get rid of for years. But she insisted she would remain in the race for the office of Governing Mayor at Red City Hall in Berlin, whatever happens. The “whatever” part actually just happened. On Thursday, the ‘Freie Universität’, her alma mater, revoked her doctor’s degree.

It was a foregone conclusion that the opposition, and especially the CDU in the city state of Berlin, would criticize Mrs. Giffey for continuing as the SPD’s main candidate. The conservatives also slammed the ‘Freie Universität’. According to them, the way the university handled the whole plagiarism drama is the “biggest scandal in German science”. Of course, the extremist AfD spread criticism too. Commentators in German-language media asked themselves (aloud) whether Franziska Giffey should really govern a city of science like Berlin, in spite of the scandal. Even the Greens, Governing Mayor Michael Müller’s junior partner in the city state of Berlin’s government coalition, are very critical about the situation.

But, so far, there is no sign Franziska Giffey might be planning to give up. One thing is certain: Her plagiarism affair did damage, to confidence in politics and in science, also because this case dragged on for a long time, and due to the fact earlier decisions were corrected more than once by the university. Besides, the scandal will not exactly help Berlin’s SPD.

For the past 20 years, the SPD has held Red City Hall. Now, the Greens have good chances to take over because they gained a lot of support since the last elections. A Franziska Giffey without the plagiarism scandal would have been a far more effective weapon in the election campaign. Many believe the SPD finally lost the election yesterday, 108 days before it will actually take place, when the decision by ‘Freie Universität’ on the Giffey case went public.