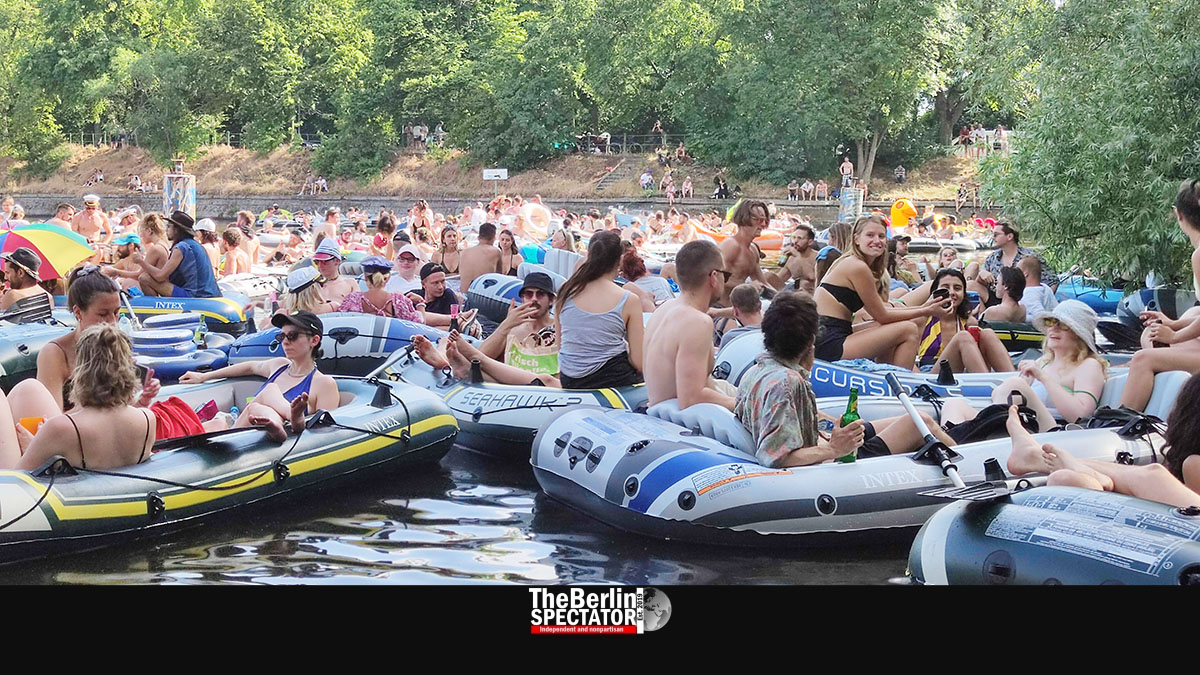 This past weekend, Berlin was fried by the Sun. Residents staged a big boat protest, watched soccer matches and tried to cool down in fountains.

Berlin, June 21st, 2021 (The Berlin Spectator) — With temperatures in the high nineties (Fahrenheit), or the high thirties (Centigrade), millions of Berliners tried to stay cool. Many did so by consuming ice cream. In front of Berlin Cathedral, kids just hopped into a big fountain.

To many Berliners keeping cool was not quite as important as soccer. So, they chose to watch 22 men run after a ball, and kicking it back and forth, on big screens. Some did so at pubs along the Spree river. Of course, they did order cold fluids.

But there was a lot more going on than just soccer. How about culture? At ’48 Stunden Neukölln’, a big event that took place all over Berlin’s rather large Neukölln district, all kinds of music and art were offered, including unconventional performances. In front of the Passage cinema, a red-haired lady became art herself, by moving around in a box made of large plastic windows. She did not have to worry about feeling cold in there.

All Over the Place

Elsewhere in Neukölln, on Hobrecht Bridge, one of several protests was staged. Residents there want the bridge to be closed to motorized vehicles. The municipality, on the other hand, intends to build tram tracks across it. There are those who believe Berlin’s traffic needs those bridges across the Landwehr Canal, and there are residents who want to get rid of noise.

What else did Berliners do? They partied hard all over the city’s parks. The police was busy sending party people home because of the Corona rules they did not adhere to, as usual. Their noise was another issue. Of course, the remainders of those parties on Friday and Saturday night, mostly bottles and cups, were scattered all over the place.

Parts of Berlin’s party and club scene staged a party protest on Landwehr Canal in dozens of inflated boats and some motorized ones. The water police tried to get some order into this giant boat party, but did not seem to be too successful. Strong Techno beats were heard all along the Canal. The message of this protest: “We hit the water because we do not have the space we want in the city”. The protesters want the clubs to reopen. So far, outdoor dance events are allowed for up to 250 persons, as long as all participants have fresh and negative Corona test results.

On top of it all, Sunday was the Berlinale film fest’s last day. The German documentary ‘Herr Bachmann und seine Klasse’ about a school grade was just awarded the Audience Prize. Because of Corona, the film festival had two parts this year. In winter, the first part took place, for the film industry. In the past ten days, the public had the opportunity to experience Berlinale screenings at several open air cinemas. The next Berlinale film fest is supposed to take place in its regular setting and form, from February 10th to 20th, 2022.

Berlin’s public swimming pools filled up with people quickly, which had to do with the limited number of guests they were allowed to admit per time slot. The city’s lake baths were highly frequented too.