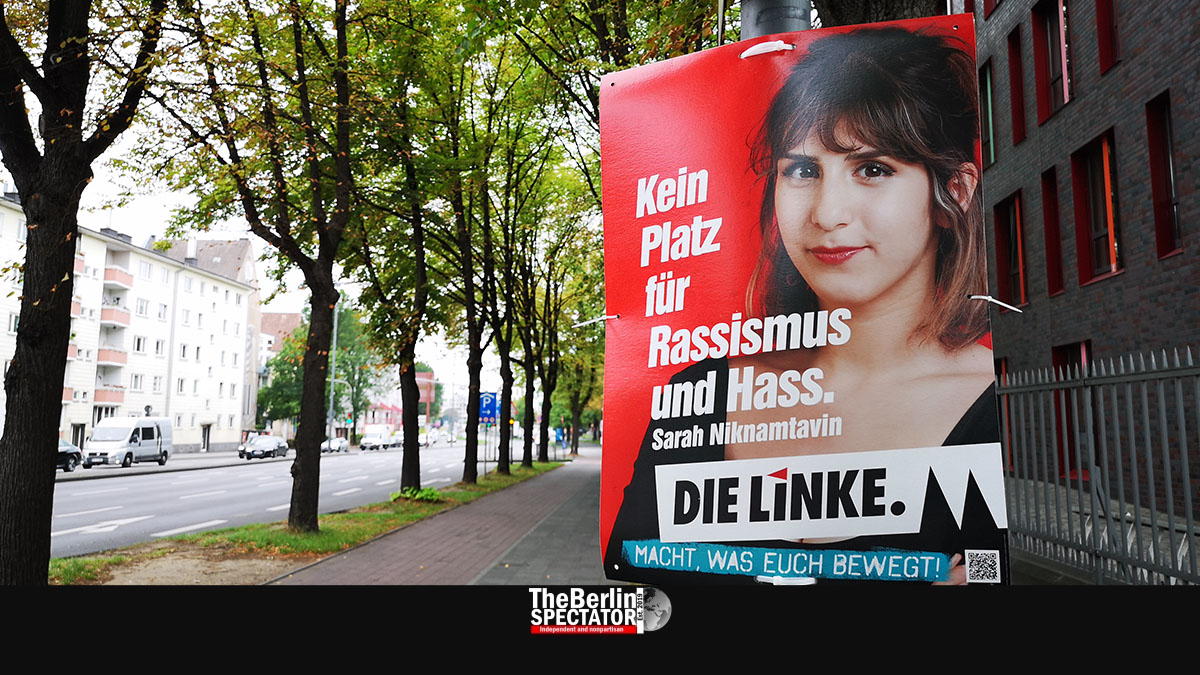 In 81 days, Germany’s elections for the Bundestag will take place. Some are hoping for a three-way center-left government coalition, but it will not happen. One of the reasons is the strange election program the party ‘The Left’ came up with.

Berlin, July 7th, 2021 (The Berlin Spectator) — In Germany, the far-left ‘Die Linke’ (‘The Left’) is the successor of the East German Socialist Unity Party which ruled the GDR. In the Federal Republic, it partially reinvented itself as the party of democratic socialism. In the past years, ‘Die Linke’ lost its status as the main protest party in the eastern federal states to the extremist right-wing AfD. Therefore, its support decreased substantially.

Like other major parties in Germany, ‘Die Linke’ has different wings. There are communists on the one and members who come close to being political realists on the other hand. Dietmar Bartsch, the party’s floor leader at the Bundestag, and Petra Pau, who is one of the Bundestag’s six Vice Presidents, are moderate members. With Bodo Ramelow, ‘The Left’ even has a First Minister, in Thuringia, who also could be a Social Democrat, in theory. On the other hand, there are radicals who want a revolution. ‘The Left’ also has superstars like Gregor Gysi whose law firm charges 4-digit amounts per hour while he demands support for the poor at the Bundestag.

So, what do they all have in common? They stand behind a rather unconventional election manifesto. It says they wanted to implement a “model of an inclusive and socialist society”. This is something the former East Germans got rid of in a peaceful revolution 31 years ago. The party’s radicals made sure far-reaching demands were added. For instance, ‘Die Linke’ actually wants to get rid of the Federal Office for the Protection of the Constitution, because it supposedly “does not protect democracy, but right-wing structures”. Well, from the perspective of ‘Die Linke’, almost everyone is right-wing. Besides, the authority in question does look into the radical right, including the AfD, and does not protect any anti-democratic individuals, groups, organizations or parties.

Some of ‘Die Linke’s leaders are hoping for a government coalition with the center-left Social-Democratic Party (SPD) and the center-left Greens on the federal level. It will not happen. First of all, the math is a problem: The Greens, who are the strongest of the three parties mentioned, started losing a lot of support in the past weeks. In other words: They do not have the votes for this kind of experiment, according to the latest polls. Secondly, the demands the left-wingers listed in their manifesto simply go too far. They want “peaceful relations with Russia and China” and obviously dislike the United States: “With the new President as well, the United States are continuing their course of confrontation for the preservation of their supremacy, with sanctions and military interventions.” Could it be that they are mixing up the U.S. and Russia? The scary part is that they are not. One of their demands is the closure of all U.S. military bases in Germany, including Ramstein.

Sure, their demand according to which the “armament of the police” needs to stop sounds good to left-wing radicals. The only issue is that there is no armament of the police. ‘Die Linke’ says Chancellor Angela Merkel’s grand coalition had created the “breeding ground on which racism and ideologies of exclusion are thriving” with its policy. This will not go down too well at the SPD’s HQ, the Willy Brandt Haus in Berlin. But this part almost sounds harmless compared to other things the election program includes. What ‘Die Linke’ is absolutely right about is the danger posed by the extremist right which it keeps on mentioning. They are “forgetting” the radical left though. Go figure.

Ready for the next big demand? ‘The Left’ actually wants to disband NATO and replace it with “a collective security system with the involvement of Russia, and disarmament as its central goal”. They are not saying whether they want to congratulate their friends for their approach in Crimea or if tea with Novichok is the right drink for those who disagree. Neither the SPD nor the Greens can afford to even consider a coalition with a party with an election manifesto of this kind, no matter how many political realists ‘The Left’ may have on their membership list.