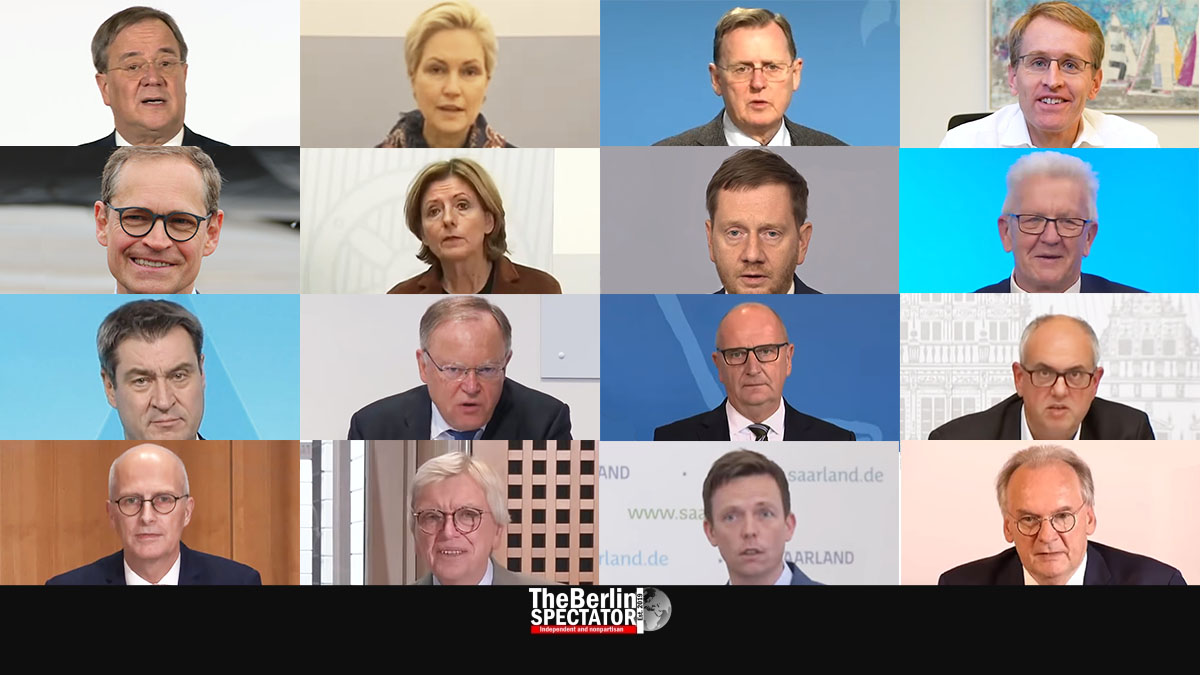 Looking at Germany’s gender equality situation is rather frustrating. At least the country has a female head of government, you say? Sure, but not for much longer.

Berlin, December 29th, 2020. Update: July 8th, 2021 (The Berlin Spectator) — About seven percent of all Lufthansa pilots are women. The first two, Evi Hetzmannseder and Nicola Lisy, were trained in 1988, just before Germany’s reunification. Back then, some passengers must have been surprised. Others probably thought the airline was crazy. Well, not anymore. But seven percent is definitely not much.

One hundred percent of all Chancellors who are in office right now are female. Soon, this number will likely drop by 100 to zero percent. How long will it take until the second female Chancellor comes in? Ten years? Thirty years? Or will it take 56 years, like it did the first time?

There are sixteen federal states in Germany. Three of them, Berlin, Bremen and Hamburg, are city states run by two First Mayors and one Governing Mayor who are male. And there are thirteen First Ministers. Guess how many of them are women: two. Manuela Schwesig rules Mecklenburg-Hither Pomerania and Malu Dreyer is head of government in Mainz, the capital of Rhineland-Palatinate.

Cockfights in the Spotlight

During the ongoing Corona crisis, neither Manuela Schwesig nor Malu Dreyer, both of whom are Social Democrats (SPD), have been in the center of the attention, except when Schwesig shut down her state to keep infected tourists out. Maybe it is because they are not into cockfights as much as their male colleagues. In German politics, more men tend to have the inner urge to stand in the spotlight every five minutes.

Looking at the Berlin Bundestag gives some people headaches as well. Out of 709 MPs, much less than a third, 221, are women. As it turns out, the more right-wing a party, the less female MPs it has. The extremist ‘AfD’ has not discovered the female gender yet. Ten women and 81 men are part of their Bundestag faction. In the case of Chancellor Angela Merkel’s conservative CDU and its Bavarian version CSU, things look only a little better, with 51 women and 195 men. The FDP is pretty bad as well, in this regard. Speaking of bad: Only six out of Angela Merkel’s fifteen federal ministers are women.

Looking at parties on the left side of the aisle is more satisfactory when it comes to equality. With 65 women and 87 men, the SPD is not quite as far away from the right balance as the CDU/CSU. In the case of the left-wing Greens and the far-left ‘Die Linke’, women are the majority (39 vs. 28 and 37 vs. 32, respectively).

Shall we get more frustrated? O.k., no problem. All we need to do is to look at leadership positions in companies. In 2019, 29.4 percent of those were held by women, according to the Federal Office of Statistics in Wiesbaden. Even more bad news? There is plenty. Germany’s non-adjusted gender pay gap is 19 percent. If it continues improving at the pace it has since 1995, it might disappear in the year 3000.

Back to Square One

In order to get really depressed, let’s go back to the Chancellery. In the conspicuous building in the heart of Berlin, Angela Merkel has been the main resident for 16 years now. By the time she leaves office in fall or winter, she will have been there for 16 years, just like the late Helmut Kohl. Her successor will probably be male, unless Annalena Baerbock of the Greens makes a lot of headway in the polls within the next 80 days.

In Mrs. Merkel’s own party, the age of the woman is over. The CDU’s former chairlady Annegret Kramp-Karrenbauer was replaced by Armin Laschet who will likely end up in the Chancellery. In the post-Merkel era, we will be living in a male republic, even more male than today.