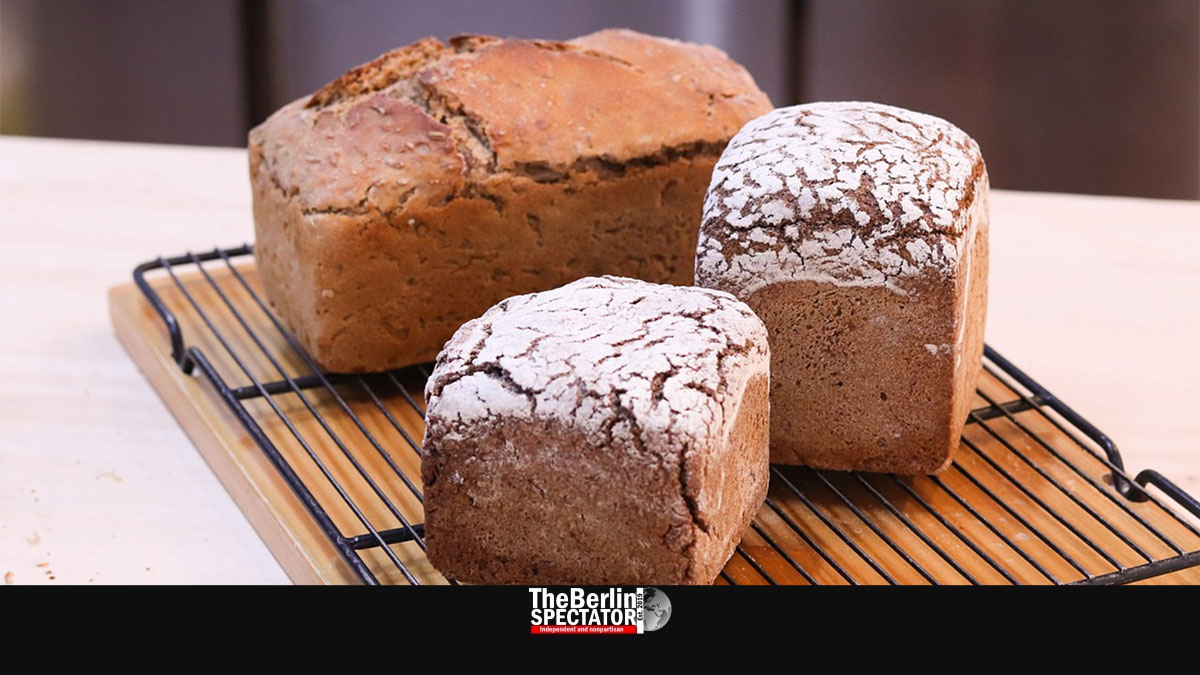 Certain products from Germany are popular. Driving a new Audi A8 is a great experience. So is listening to a Beethoven symphony. Or consuming German bread.

Berlin, January 10th, 2021. Update: July 13th, 2021 (The Berlin Spectator) — Bread is different around the world. In Germany, there are hundreds of kinds. Many bakeries use old, traditional recipes. Sure, there is supermarket bread as well, but anyone who wants excellent bread in Germany will definitely find it.

Good bakeries in Germany offer it all. They have bread rolls, bread, cakes, tarts and cookies. Germany is known for its excellent baking culture, and good bakeries celebrate it.

Many of them also sell luxury sandwiches. They mostly use bread rolls with all kinds of German, Swiss or Dutch cheeses, wurst or ham on top, with salad leaves, tomato slices or onions. There is nothing better than a fresh German bread roll with a thick layer of butter and ‘Mett’. The latter is minced and raw pork meat. But we are getting carried away here.

What bread rolls are concerned, there are regular versions in different shapes. But they also come with sesame seeds or poppy seed on top. Then there are pretzel rolls, pretzels and politically correct wholegrain rolls. Yet another category? Here we go: There are milk rolls with or without raisins.

Hey, we have not even started looking into at least some of the countless kinds of bread good German bakeries offer. No worries, we will. But let’s go to the United States of America first. It is a great country, but what they call bread over there is a joke. That is why Germany bakeries have popped up over there.

So, you live in the States and insist on consuming real bread? Go to ‘Juergen’s German Bakery’ in Columbus (Ohio). Too far? How about ‘Marina’s German Bakery’ in El Paso (Texas) or ‘Glaser’s Bake Shop’ in New York City? Does the German bakery on Seventh Avenue in Brooklyn’s Park Slope neighborhood still exist? It did in 1999. Yes, there are little centers of quality bread in America and other parts of the world.

American soldiers in Germany are being informed about the German bread culture on the website militaryingermany.com. It provides ‘Your Guide to German Bakeries’ in which it says the following: “Trying traditional German bread definitely HAS to be on your list of things to try. There is nothing like it across the world. Trust us, we tried.” Guess what: They are right.

Bread is part of many meals Germans eat. Their “Abendbrot” or “bread dinner” even contains the word ‘Brot’. The Bavarians have a ‘Brotzeit’, or ‘bread time’. In these cases, and for breakfast, bread is the meal’s foundation. Everything else is being put on top. Yes, it is all about bread. Germans who do not get their ration of bread for a while will become grumpy.

French Camembert cheese, Swiss Appenzeller cheese, German Butterkäse, sliced wurst, butter, honey, marmalade, jam, syrup, or whatever they use, needs bread. The slice of bread or bread roll is the aircraft carrier, the butter is the tarmac and the cheese is the F-35. There is no breakfast without bread. In many cases, bread is the main ingredient for lunch and dinner too. Germany should be renamed Breadery.

Have we mentioned German bread is the best? Let’s finally get to the bread itself. Made of flour, water and leavening agent, bread officially is a staple food. Depending on the kind of bread the baker makes, more ingredients will be added. High quality flour will always make bread more delicious than cheap stuff.

There is no Germany without bread. People from other parts of the world might be surprised or confused — or both — when they enter a proper German bakery for the first time. If they do not cover their yes with their Corona masks, they will see countless loafs of actual bread. And no, we are not talking about toast ‘bread’ in plastic bags or ‘bread’ for hamburgers, but the real thing.

There is white bread made with at least 90 percent of wheat, which is just the right kind for breakfast. Apply a good layer of German butter and high-quality strawberry marmalade, and you will be addicted within seconds. How about brown bread, also known as ‘grey bread’ or ‘Graubrot’ (which, for some weird reason they call ‘black bread’ in southern Germany)? This one is appropriate for anything, including more hefty meals. On top of the butter, spread some good German liverwurst and place onion rings on top of it all.

Brown bread, which people in northern Germany call black bread (‘Schwarzbrot’) or whole-grain bread (‘Vollkornbrot’) is the most politically correct one. It is more healthy than the ones mentioned above since it is made of cereal, germ and bran. For instance, you could eat it with good yellow cheese and tomato or avocado slices on top. Or how about an overdose of garlic?

Three-grain bread is very popular. The same applies to four-, five- and six-grain bread. And there are a gazillion types of rye breads. Dinkel wheat bread can be found in good German bakeries. Oat bread, barley bread, onion bread, brick-oven-baked bread and wood-fired-oven-baked bread are additional kinds. And there are sub-categories in many cases.

All of this is only a tiny part. There are hundreds of kinds of German bread. And all of them are special. When it comes to bread, the ‘Made in Germany’ label is good to have. Yes, it is cars, cuckoo clocks and bread.

Merkel Urges Germans to Get Vaccinated