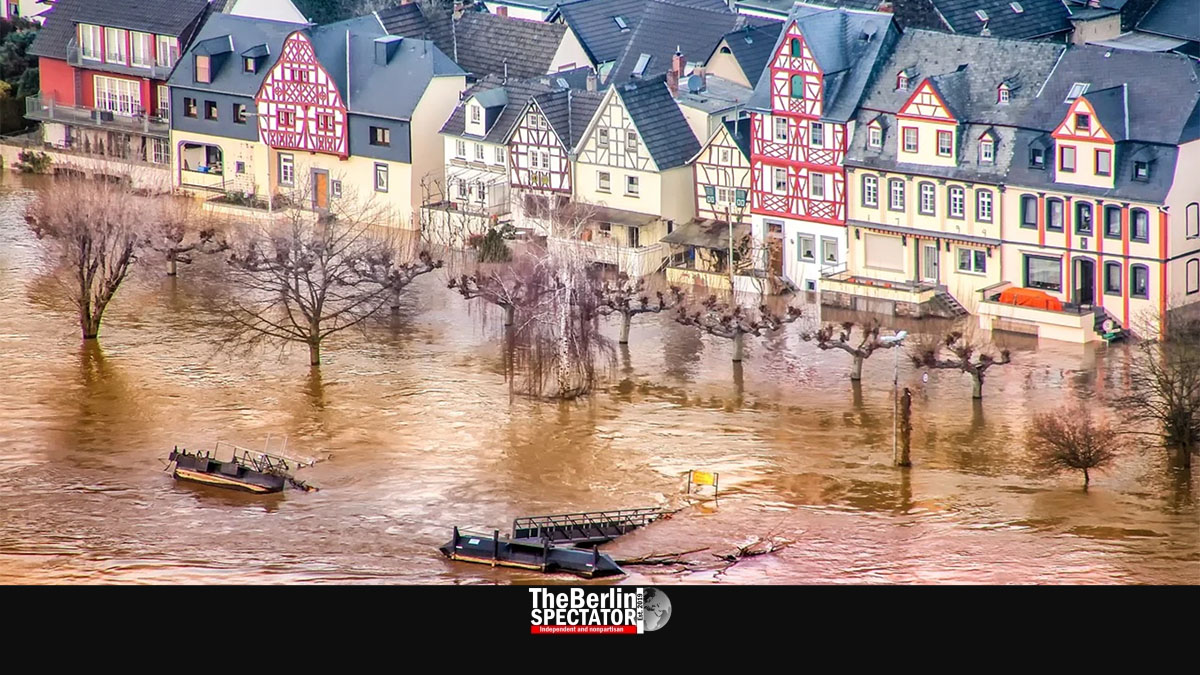 According to the authorities, at least 133 people have died in the areas affected by the catastrophic flooding on Wednesday night. This number will probably increase further. Far more than 1,000 people are still missing.

Berlin, July 17th, 2021. Update: 9:54 a.m. CEDT (The Berlin Spectator) — Since the catastrophic flooding hit countless villages and towns in western Germany, the authorities on site have revised the number of victims upwards many times. The fear is that they might have to continue doing so for a while. Earlier this week, the flooding developed so rapidly it did not give people the chance to flee. As many as 1,300 people are still missing. This is the worst flooding Germany has experienced since 1962, when 315 died in the North Sea flood in and around Hamburg.

On Saturday, President Fran Walter Steinmeier was going to visit Rhein-Erft county in North Rhine-Westphalia, which was affected badly. With First Minister Armin Laschet, he intends to inspect the damage and talk to helpers. Chancellor Angela Merkel just returned from a visit to the United States of America. She has not taken a first hand look at the flooded areas, so far, but a trip is already being prepared. In Rhineland-Palatinate, First Minister Malu Dreyer blamed global warming for the deadly flooding. She told ZDF television, people who still had not understood that the climate change had ramifications could not be helped anymore.

The water is now receding. As it does, more and more victims are being found. In at least one area, the situation worsened, namely in Heinsberg county, where a levee just broke. As a result, 700 residents needed to be evacuated. In the city of Koblenz alone, at least 90 inhabitants died, according to the local police. More than 600 people were injured there. The flood has reached the neighboring Netherlands. Many residents in Venlo needed to be evacuated.

On Friday, 102,000 residents in the two federal states affected most were still without power. Train connections were interrupted. The same applied to roads, including parts of the Autobahn network. At some spots, parts of roads were washed away. A huge effort will be necessary to rebuild everything. This applies to the traffic infrastructure but also to buildings and houses that were damaged or which simply disappeared.

In Rhineland-Palatinate’s Ahrweiler county, the village Schuld looked as if a tsunami had just hit. Houses were missing, cars were piled up all over the place and streets were buried in rubble. The situation was similar in Bad Neuenahr-Ahrweiler, which looked like a war zone. Streets and pedestrian zones simply disappeared, countless buildings were badly damaged. The municipality of Dernau was flooded almost completely. In the same area, even bridges were destroyed.

In Euskirchen, where at least 24 residents died, the water has already receded. A lot of damage to streets and buildings was revealed. In Erftstadt-Blessem, several houses were swept away by the flooding, a huge cavity in the ground swallowed them along with cars and streets. Federal Highway no. 265 in the same area was flooded completely. There are calls for a giant aid package for the affected region. Both the federal government and the European Union are preparing financial help.