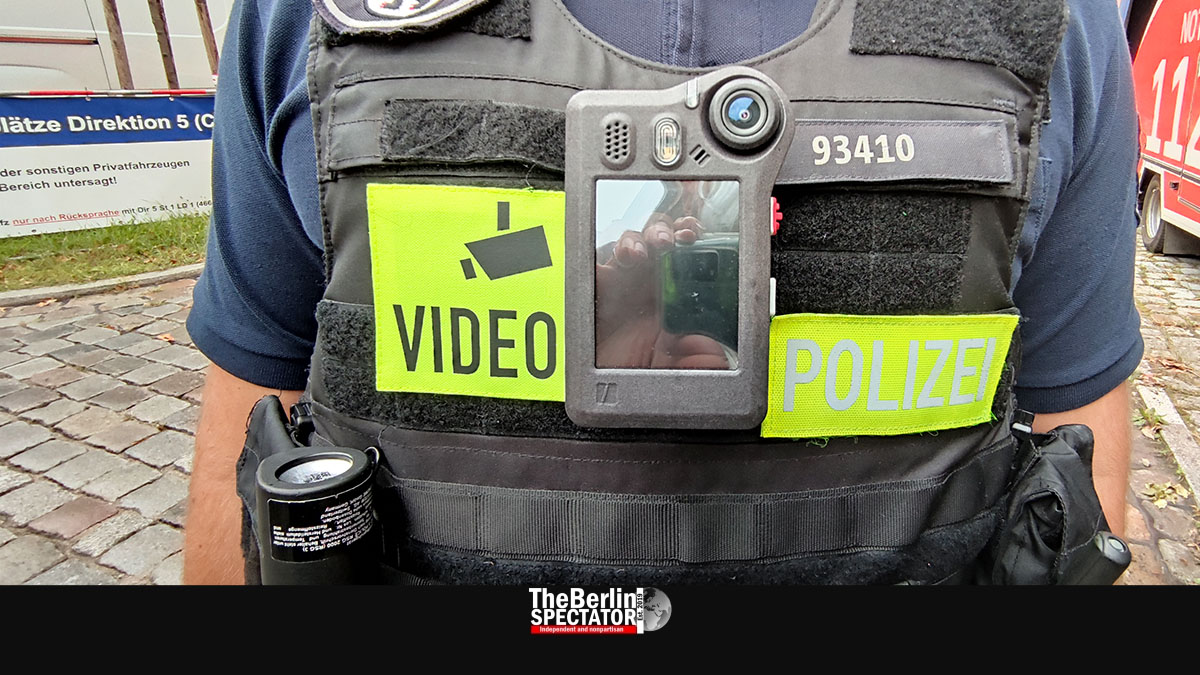 Berlin’s Police Department is now testing bodycams on cops. Those tiny video recorders are supposed to prevent crime and provide evidence. In times like these, in which officers and firefighters become victims of attacks, bodycams can help.

Berlin, August 24th, 2021 (The Berlin Spectator) — In the past days, some police officers and firefighters got bodycam training. They were told what to tell people before they switch on the little camera they will attach to their vests while on duty and how to handle it technically. In addition, they now know how to save the footage in case it is needed as evidence. But using those bodycams is a little more complicated than it sounds, for legal reasons. Data protection is big in Germany.

Berlin is the third federal state to test bodycams. Twenty devices will be used by cops in precinct 5, and ten more by firefighters in Berlin’s Mitte district. When on standby, the devices work like a cockpit voice recorder in airliners, except they do not record quite as much. On planes, those recorders overwrite their audio every 30 minutes, while police bodycams in Germany overwrite the video they record after 30 seconds. But once they are active, they record footage until they are being switched off.

There seem to be many advantages:

>> The footage can be used as evidence in case of attacks against people and other kinds of crime.

>> This also applies when police officers are attacked.

>> It works the other way around too: The police are often accused of illegal violence against persons. The video bodycams record can show whether these allegations are accurate or not.

>> Experience from other federal states and other countries have shown that bodycams can actually prevent offenses. Potential crooks tend to think twice before they commit crimes when they know they are being filmed.

>> Bodycams can also help deescalate all kinds of situations.

There are laws the Berlin Police Department has to follow. For this reason, it lets its cops switch on those cams in certain situations only, including when they are being attacked or when they need to use force. Before they start recording, they have to announce it to the person they are dealing with. Anyone who communicates or is confronted with a policeman or policewoman in Berlin, one who carries a bodycam, can tell them to switch it on, meaning this goes both ways.

Of course there are problems too. First of all, the police in Berlin will not get too far with only 20 bodycams. Early next year, 300 of them are supposed to be tested, before they become official devices for all cops. Berlin’s Interior Senator Andreas Geisel stated, the financial aspect needed to be resolved. In addition, there are technical issues. The Senate Administration of the Interior has not found a storage solution for all the data the bodycams will produce.

But, all in all, Senator Geisel is glad some of his 18,000 cops have bodycams, also because in 2020 alone, police officers and colleagues of similar professions in Berlin were attacked 3,525 times, meaning there were 10 cases per day, statistically. There are more than twice as many attacks against police officers in the German capital than in the rest of the country. “Each attack against an officer is an attack against a person who works for our safety”, Geisel said at the police HQ in precinct 5. With those bodycams, the state of evidence would be improved, he predicted. Berlin’s Police Chief Barbara Slowik stated this was about the safety of her employees. Those cameras could influence the decision to commit a crime, she said.