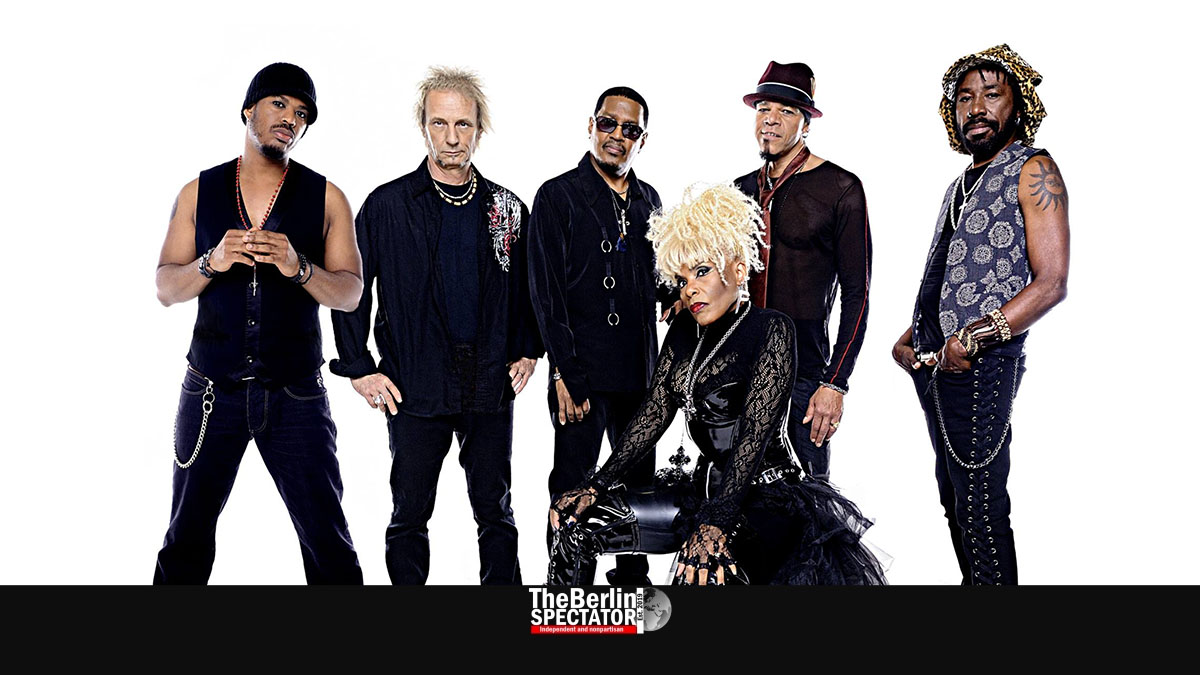 Mother’s Finest are the prototype of a Funk-Rock band. In fact, they invented the genre in the early 1970-s. Soon, they will be funking up Austria, Germany and Switzerland. Because of Corona, they had to rebook their tour a million times.

Berlin, November 14th, 2020. Update: October 27th, 2021 (The Berlin Spectator) — Thanks to the lady in the center of both the stage and the attention, Joyce ‘Baby Jean’ Kennedy, the endeavor Mother’s Finest took off like a rocket. Ever since she founded this band with her colleagues, vocalist and percussion hero Glenn “Doc” Murdock, guitarist Gary “Moses Mo” Moore and bassist Jerry “Wyzard” Seay in 1970, they spread fascination all over the place with their approach and the unlimited energy they are still known for.

In 1972, when their first album hit the record stores, Funk as we know it today was still in its development stage. Mother’s Finest contributed to its advancement by integrating interesting off-beats into the sophisticated Blues Rock tunes with Gospel elements they played in Atlanta, Georgia, back then.

‘Nigizz Can’t Sing Rock ‘n’ Roll’ was a pretty scandalous song title which caught people’s attention once the second album was out in 1976. Scandalous or not, the little controversy it created helped the band enlarge its fan base. ‘Fire’, one of the group’s all-time big hits, was part of the same album.

In 1978, something happened in Germany. In the city of Essen, one of their concerts was recorded for the ARD‘s TV series ‘Rockpalast‘. This gig was the greatest Funk Rock event of all time. It defined the genre and it presented the band to a huge audience. Joyce Kennedy and her colleagues Murdock, Seay, Moore, Keck (keyboards) and Borden (drums) raised the roof.

With his thick German accent, Albrecht Metzger announced the group in front of the camera: “German television proudly presents, as our guests, live in ‘Rockpalast‘, Mother’s Finest!” After the first bars of their first tune, ‘Dis Go Dis Way’, the audience was fascinated. After the second song, ‘Rain’, they were in love. And when Joyce Kennedy sang ‘Baby Love’, they were addicted.

‘Baby Love’ is one of their huge hits. It contains simplistic but convincing off-beats provided by bassist Jerry “Wyzard” Seay. Those turned this Blues Rock song into a stunning, funky experience and the band’s hymn. When DJs, including the author of these lines, played ‘Baby Love’ at parties in the 1980-s, the dance floor would fill up instantly.

From this moment onward, fans in Germany would admire and follow Mother’s Finest for decades. The group even returned to ‘Rockpalast‘ in 2003 and 2016. Along with the ‘Rockpalast’ gigs by Earth, Wind & Fire (1979) and Rick James (1982), that first Mother’s Finest concert was one of greatest and most memorable ones the Germans ever captured on tape.

More killer albums followed, including their legendary 1979 live record, ‘Iron Age’ and ‘One Mother To Another’. In 1984, the fans were in for a big surprise when an album entitled ‘Lookin’ For Trouble’ was released. The artist it was recorded by was not Mother’s Finest, but Joyce Kennedy. Yes, it was the first of two solo albums she recorded.

The next surprise was the fact that ‘Baby Jean’ proved to the world that she could do smoother stuff too, including ‘Stronger Than Before’ by Burt Bacharach and Carole Bayer Sager. That very same tune was recorded by Chaka Khan as well, the same year.

With the album ‘Looks Could Kill’, Mother’s Finest were reunited in 1989. And they have been ever since. Sure, they took well deserved breaks here and there, but the legend lives. ‘Shut Up’ is the title of their latest single. The fact that Joyce Kennedy is 73 years old by now does not show at all. She hasn’t changed a bit.

All along, Mother’s Finest were more successful in Europe than in the United States. They have done far more gigs on this side of the Atlantic Ocean. In 2020, they were going to embark on another tour, but the damned Coronavirus messed it up. The same happened in early 2021. Now, there is yet another new tour schedule.

Their European tour is scheduled to commence in the German town of Bebra on April 27th, 2022. Gronau, Leverkusen, Dortmund, Aalen and Mosbach are next. How does Berlin sound? We will know on May 9th, 2022, when Mother’s Finest are scheduled to take apart the Columbia Theater. Welcome to the city of cities, guys!

The good news is that there are even more gigs, in Zurich and Rubingen (both in Switzerland), Bensheim, Koblenz, Hanover, Vienna (Austria), Nürnberg, Remchingen and Wetzlar. From there, they will have to head north, for their gig in Hamburg. Neuruppin and Schiffdorf are next. So, does this qualify as a big tour? You bet. There are several Mother’s Finest gigs in the Netherlands too, by the way. Let there be Funk!

Mother’s Finest’s website and their detailed tour plan can be found here. Tickets for many of their concerts in the German-speaking world can be purchased here.