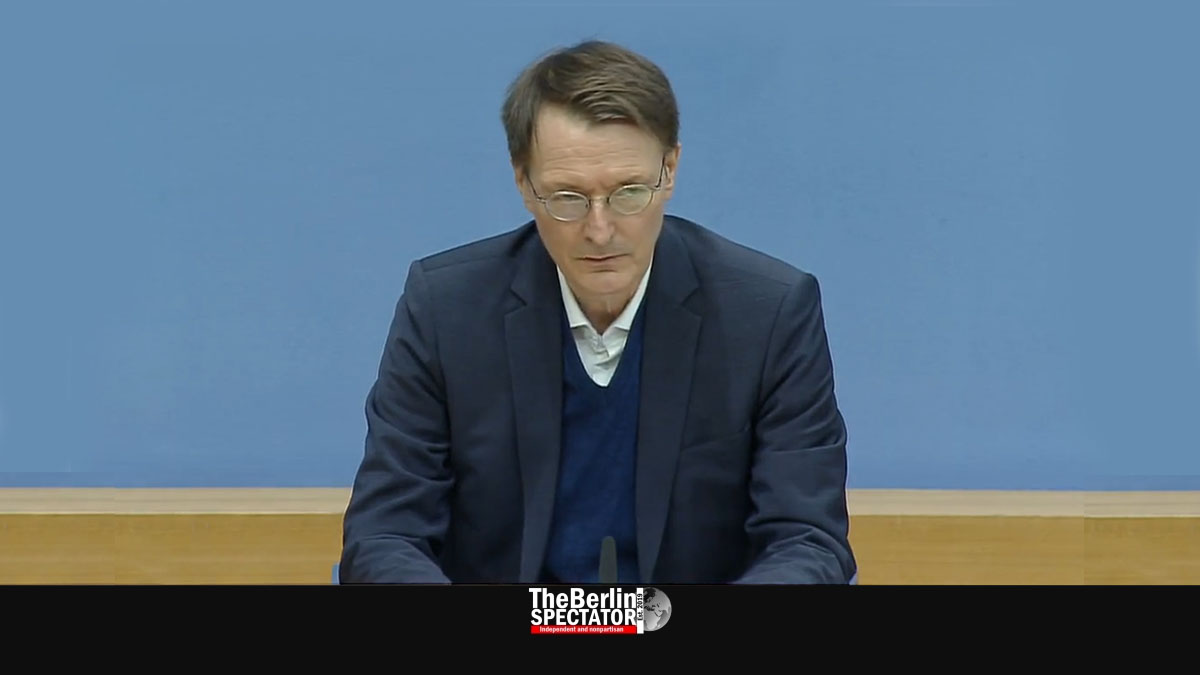 With its Corona policy, Germany is buying time. In Berlin, Health Minister Karl Lauterbach said the strategy was working. The doubling time of the Omicron mutation had been increased. But, he predicted the hospitals would reach their limits soon anyway.

Berlin, January 14th, 2022 (The Berlin Spectator) — In Berlin, Health Minister Karl Lauterbach commented on Germany’s Corona situation at the Federal Press Conference on Friday. As predicted, the Omicron variant of the virus was now the dominant one, he said. Germany had managed to slow down its spread to some extent by implementing contact restrictions as well as ‘2G’ and ‘2G Plus’ rules. As a result, the doubling time was now six days instead of four and a half.

In Germany, ‘2G’ means vaccinated persons have access along with individuals who recently recovered from Corona. At locations with ‘2G Plus’ rules, Corona tests with negative outcomes are required on top of vaccination certificates or proof of recovery. People who got booster vaccinations as well usually do not need to get tested before they enter places at which these rules apply.

At the press conference, Karl Lauterbach stated Germany was trying to turn the approaching Omicron wall into a smaller one, or a more harmless hill. This would result in having less Corona-related deaths and less Long Covid cases. The latter is a condition many former COVID-19 patients suffer from for a long time. The goal was to limit the number of Corona victims as much as possible.

In spite of the fact that Omicron seemed to be less dangerous than Delta, no all-clear could be given, Minister Lauterbach said. One of the problems was Germany’s high rate of unvaccinated persons. To wait until everyone was infected was not an option because this kind of approach would lead to an unknown number of victims. The Minister also rejected the notion the Corona pandemic could end after the Omicron wave. He even said there might be more mutations, including more dangerous ones.

Lauterbach predicted Germany’s hospitals and medical laboratories would reach the limits of their capacities. He announced he had made sure patients who worked in the medical field would have priority. The Minister also said the booster vaccination campaign was going well, but needed to be sped up further. Germany’s strategy was to slow down the wave and use the time for immunizations. Since he had taken office, he had managed to purchase 55 million doses of vaccine for booster vaccinations, Lauterbach stated.

Professor Lothar Wieler, the Director of the Robert Koch Institute in Berlin, was part of the same press conference. According to him 70 percent of all new Corona infections are Omicron cases, at this stage. Within days, this mutation would suppress Delta. The data showed that one in 100 persons in Germany was infected, but these were the reported cases only. One in four Corona tests were positive, Wieler said.

He also said the number of Corona patients in intensive care was decreasing right now, and the number of related deaths had not increased. But, because of the extremely high infection numbers, this would change, he predicted. Professor Wieler also explained that Germany’s health authorities could not trace back most infections anymore because there were far too many. Yet again, he asked people to get vaccinated right now and to stay at home as much as possible.

Wieler’s colleague Christian Drosten, a leading virologist at Berlin’s Charité hospital, added it was true that Omicron was a “milder” variant than Delta. But, because of the high number of people it infected, this effect would be neutralized. Germany’s main problem was the fact that 3 million people above 60 years of age were not vaccinated against Corona, and that 9 million persons in this age group were not ‘boostered’.

In Berlin, the Omicron variant already is at 90 percent. According to a report by the RBB radio and TV network, a waste water analysis led to this result.