Olaf Scholz: Germany ‘Stretched to its Limits’ on Weapons for Ukraine 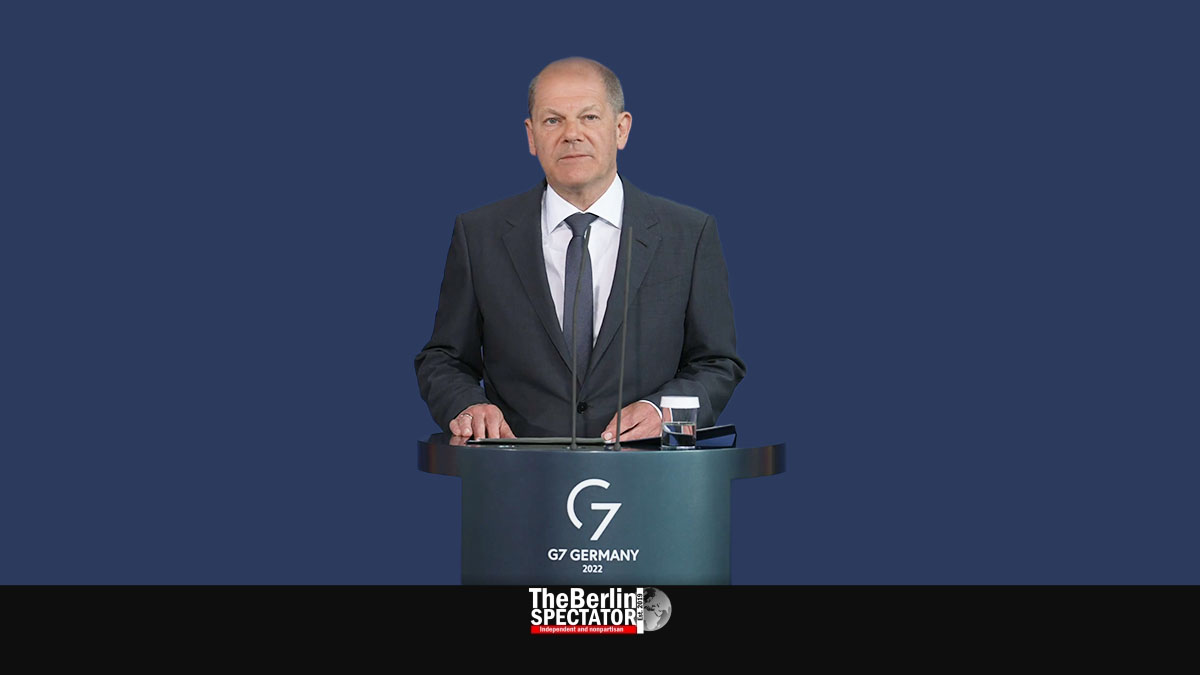 After a video conference with his colleagues in partner states and the heads of NATO and the European Union, Chancellor Olaf Scholz commented on the question of deliveries of arms. Ukraine would receive heavy weapons, but not from the German army.

Berlin, April 20th, 2022 (The Berlin Spectator) — In coordination with its partners, Germany wanted to keep on supporting Ukraine militarily, Olaf Scholz said. The goal was to make sure Ukraine could fend off Russia’s attacks. He made clear the military support needed to be viable quickly and the deliveries had to take place very soon.

But, according to Scholz, Germany is stretched to its limits because its ability to defend itself against a Russian attack needed to be guaranteed. This was why his government was cooperating with the German weapons industry and the Ukrainian government. A list [of needed and available weapons] was being worked on. The Federal Republic of Germany would pay for the items Ukraine chose, Olaf Scholz stated.

“We have asked the armament industry to tell us what kind of material it can deliver soon”, the Chancellor said. This was about anti-tank weapons, anti-aircraft guns and ammunition as well as items that could be used against artillery attacks. Scholz said Ukraine had made choices and Germany was providing the needed funds. Berlin was also cooperating with partner countries who followed the same strategy.

The Chancellor also made clear Germany was already delivering weapons to Ukraine which did have an effect. The systems Germany was providing could be used over big distances, including in the fighting that was taking place right now. Scholz was referring to the offensive the aggressor, Russia, just launched in eastern Ukraine. In addition, he hinted Germany would support the delivery of heavy artillery systems from the United States and the Netherlands to Ukraine.

Olaf Scholz said Russia’s President Vladimir Putin had not expected the kind of unity there was against his war in Ukraine. NATO could not intervene. But the sanctions Europe had put in place were already showing an effect. For instance, the Russian economy was shrinking and the inflation was increasing substantially. Scholz stated this was a disaster for Russia. The next steps were in the works.

Germany’s head of government condemned the war and the new phase which just commenced. There was a lot of sadness about the victims and anger against President Putin because of this pointless war, Scholz stated. He made clear there could be no dictated peace.

Olaf Scholz’ statements were criticized as not resolute enough. Ukraine’s Ambassador to Germany, Andrey Melnyk said in his capital there was “a lot of disappointment and bitterness”. Ukraine did appreciate Germany’s readiness to provide financial means for weapons, but there were more questions than answers. It was not comprehensible that the Bundeswehr was not able to deliver weapons to Ukraine. Melnyk mentioned 400 infantry combat vehicles and 120 armored howitzers the German armed forces had.

Dear readers: We need your help.
The Berlin Spectator delivers news and features about a wide range of topics from Germany. This includes local stories from Berlin, politics, culture, tourism and people. In the past two years, we covered the Corona situation in the Federal Republic a whole lot. Recently, we reported from Berlin Central Station intensively, when thousands of Ukrainian war refugees arrived there every day.
We do a lot. But copying and pasting news agency files in order to hide them behind paywalls and call them articles is a strategy we leave to others. This is not how we work. As opposed to others, we actually are in the country we are reporting about. We are based in its vibrant capital.
The Berlin Spectator is what we call “a publication with a personality“. Anyone can sound conventional. We do not.
We thank those who are already supporting us. Without you, we would have given up a while ago. We appreciate your help a lot. You know who you are.
But we need more support since we will not get too far with about 200 Euro per month.
Would you consider supporting The Berlin Spectator? These are your options:
– You can send us a one-time donation via Paypal.
– You can support us on a monthly basis via Paypal.
– You can become our patron on Patreon (monthly donation).
– You can go to our donations page first, to check your options.
The Berlin Spectator is a good project. Help it by donating. Thank you so much.

Germany: New BMW Flagship to be Available as Electric, Diesel and Hybrid Version