Berlin: Cyclists and Pedestrians to Get More Space on Schönhauser Allee 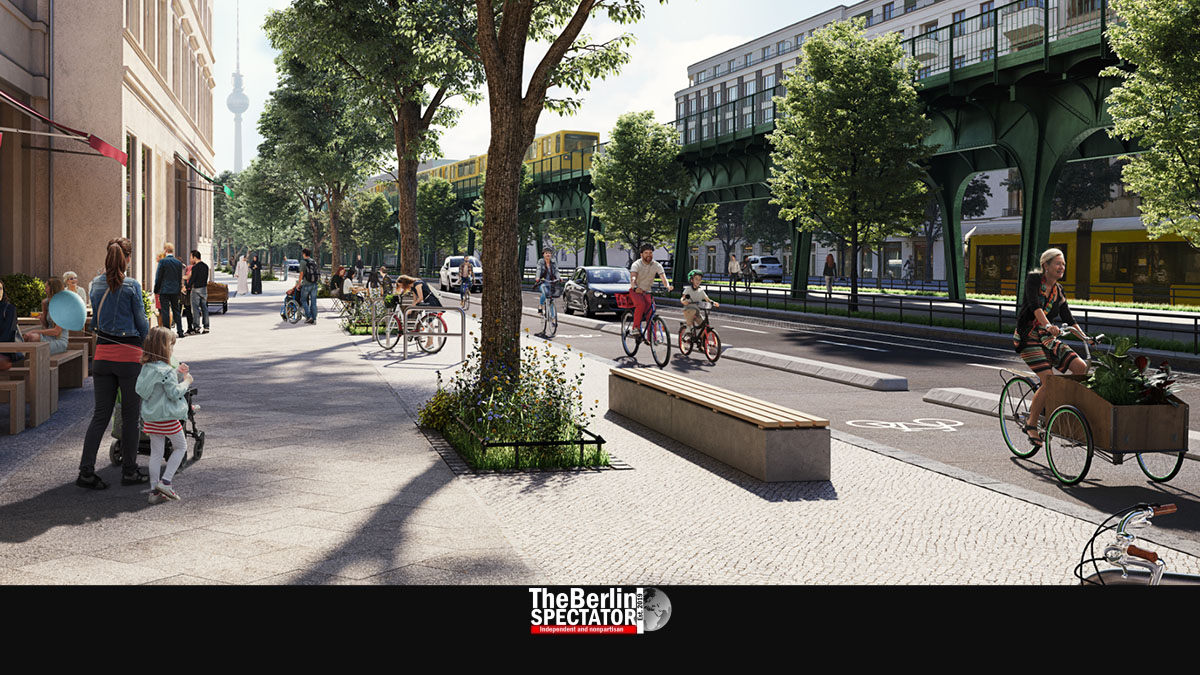 Schönhauser Allee connects Berlin’s eastern city center to the Pankow borough. On this important traffic artery, the distribution of space will change. There will be less room for motorized vehicles, but more for other traffic participants. This project is supposed to be implemented within one year.

Berlin, April 25th, 2022 (The Berlin Spectator) — Draw a straight line from Berlin’s Mitte district towards the north. There you go. You just drew Schönhauser Allee. This street is highly frequented by motorists, trams, the ‘U-Bahn’ (Berlin’s metro, subway, tube or underground), pedestrians and cyclists.

The ‘U-Bahn’ has its elevated tracks. Two of the six lanes on the street itself are being shared by trams and motorized traffic. Another two lanes are for cars, trucks, motorbikes and similar vehicles. On long stretches, the last two lanes, one in each direction, are being used as parking space for residents there.

Berlin’s Senator for Mobility and the Environment Bettina Jarasch just presented her plans for changes that will be implemented until the spring of 2023. First of all, the parked vehicles will have to go somewhere else. Nobody has told them where exactly they should park in future, because nobody knows. Maybe on a different planet. This one is full.

Those parking lanes are supposed to be turned into wide bike lanes that are protected by newly designed concrete curbs the cyclists can topple over if they are not careful. Actually, those bike lanes are supposed to be safer than the old ones. Because their lane will be 2.5 meters wide (8.2 feet), cyclists can overtake each other without crashing into pedestrians. And they will not have to ride on those narrow bike lanes anymore, with their bumpy tile surface.

Of course, there is yet another advantage: Since they are losing those bike lanes, the sidewalks will be wider, meaning there will be a lot more room for pedestrians. This change is supposed to make things safer and more comfortable. The city and the Pankow district intend to install benches people can sit on. Obviously, “the sojourn quality for pedestrians will increase”, according to Mrs. Jarasch.

She stated the number of accidents involving cyclists was on the rise. Last year, there had been 26 of them. According to the Green Senator, this is one of the aspects that make the changes necessary. She said the traffic transition Berlin was planning needed to be implemented step by step. The upcoming changes on Schönhauser Allee are supposed part of it.

A total of 720 meters of Schönhauser Allee will be affected, namely the stretch between Danziger Strasse and Gleimstrasse. It is unclear whether the new bike lanes and the other parts of the modernization will be extended at some point. But, on the stretch the Senate is focusing on now, the 10,000 cyclists who move up and down Schönhauser Allee every day will definitely feel a difference once the construction is completed next year. So will the pedestrians, and motorists who need parking spots.