Berlin: Up to 1,700 Electric Buses to Make City Cleaner and Quieter 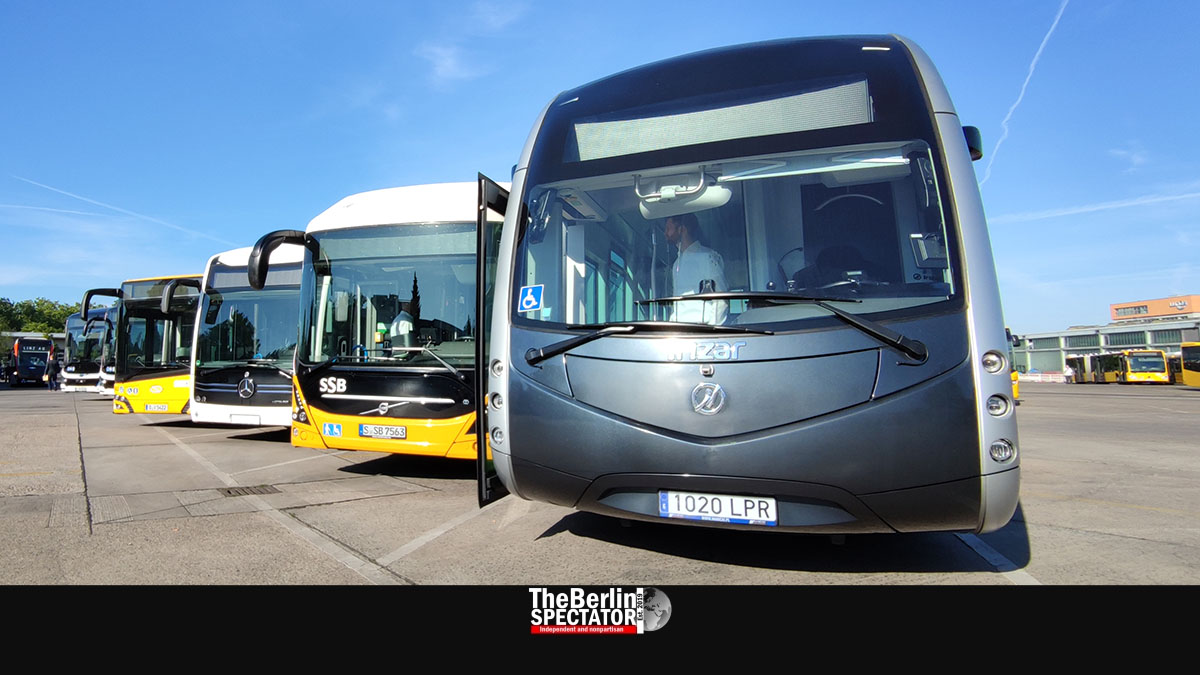 Berlin is working on replacing its Diesel buses by electric ones. This endeavor will cost a big pile of money. It is supposed to be completed by 2030. Today, lots of electric city bus models were exhibited in Spandau. Our reporter was there.

Berlin, June 17th, 2022 (The Berlin Spectator) — Several bus manufacturers are trying to sell their products to Berlin’s main public transport provider BVG. At a giant bus depot in Berlin’s Spandau district, they presented their latest electric city buses to the state-owned company, the press and to Berliners who wanted an opportunity to touch, feel and smell those modern vehicles, and to take test rides.

The Spanish company Irizar came up with the most futuristic design. Their model ‘i.e. tram’ is supposed to look like a tram, one on tires that does not need tracks. Besides, this elegant model they shipped to Berlin on a big flatbed truck, was designed for its purpose from scratch. This approach may be expensive, but it has advantages in regard to the vehicle’s weight. The bold design shows passengers that they are about to enter a new kind of bus, a cleaner one, the bus of the future.

Taking a conventional Diesel bus chassis and turning it into an electric bus is the other approach several other manufacturers seem to be following. It costs less, but these vehicles usually need more energy than they would have, had they been built as electric buses in the first place. Of course, the design laymen see from the outside only affects people’s psychology, but not the driving performance or range. The inner qualities are more important than looks.

At the bus deport, a BVG expert told The Berlin Spectator, all buses would be checked and tested. Later, a tendering procedure would be initiated. This was all about the price, output and range. The expert did not hide his personal preference. He said the electric buses offered by the Dutch company Ebusco were good products because they were lighter than others. For this reason they were “depot chargers”, meaning they did not require charging technology at the final bus stops of their lines.

Volvo exhibited attractive electric buses too. So did Mercedes and M.A.N. from Germany, Van Hool from Belgium and Solaris from Poland. Some manufacturers presented street trains with two articulations, others showed regular articulated vehicles or regular buses with two doors. All kinds of electric city buses do cost a lot of money. While conventional Diesel buses for the city are around 250,000 Euro (262,387 U.S. Dollars or 214,062 Pounds Sterling), electric ones are more than twice as much. The amounts on their price tags vary between 600,000 and 1,000,000 Euro (629,817 to 1,049,695 Dollars or 513,750 to 856,250 Pounds).

On top of the funds for the electric buses, the charging infrastructure costs giant amounts of cash. The city state of Berlin, which owns the BVG, will have to come up with billions. Up to 1,700 electric buses are supposed to take Berlin’s passengers from A to B and back to A all day long. Two new depots with countless charging stations are being built, five more need to be converted once those old buses and the Diesel clouds they blow out of their exhaust pipes finally disappear.

Berlin’s BVG has Germany’s largest bus fleet even today. There are some 1,500 buses, 140 of which already are electric. Berlin’s State Secretary for Mobility Meike Niedbal stated 50 percent of all public transport passengers in the city were being transported by buses, also because 90 of all Berliners lived very close to bus stops. She said there was a unique chance to switch over to electric mobility. Berlin was not only the capital of Germany, but it would be the capital of electric mobility too.

In order to be able to present their products in Berlin on Friday, some manufacturers took them away from public transport companies in Stuttgart and Munich which they had already sold them to. Van Hool brought in an extremely long street train from Linz (Austria). All electric buses that were presented at the deport in Spandau were impressive products.

Whether the Senate and the BVG will actually manage to replace absolutely all Diesel buses in the next eight years remains to be seen. While they just need full tanks in order to move around all day, many electric buses need to be charged both at the depot and at final stops. Otherwise they will not be usable for hours at a time. Trolleybuses are an option too. Modern ones do not have to be connected to their overhead wiring all the time if they have modern batteries. Those models are even more expensive than the rest, because their technology is more complicated and due to the fact that charging them is easier.

Germany: Intense Heatwave to Hit this Weekend, with Temperatures of up to 37 Degrees Centigrade