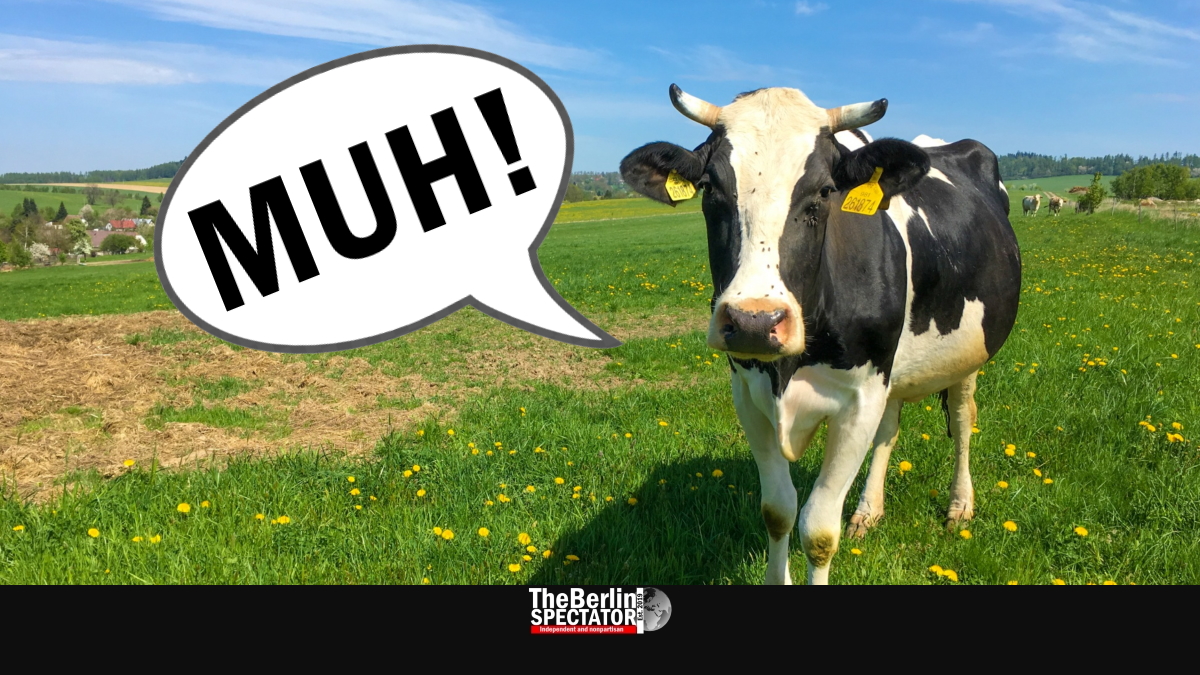 Animal languages may be difficult to learn. The entire world is wrong about them, except for the three German-speaking countries. Once and for all: The cow does not say ‘moo’, but ‘Muh’. We insist.

Berlin, July 29th, 2022 (The Berlin Spectator) — A cow named Mathilde who lives within the borders of Germany, Austria or the German-speaking part of Switzerland will get hungry now and then. When she does, she will say “Muh”. When she is thirsty, she will make her farmer aware of that issue by saying “Muh”. And once she believes she needs to be milked she will express that wish by saying “Muh”. When the vet puts on the rubber glove, “Muh” is the usual reaction.

Let’s get the following out of the way: All of those transcriptions of cow language from the English-speaking world, Asia, Spain or Latin America are erroneous. Guys, it’s not “moo”, it’s not “momo”, even though the Japanese insist it is, and it’s not “meuh” either, dear Frenchmen. Je suis désolé. It’s “Muh” with a capital ‘M’.

By the way: Onomatopoeia is the process of creating a word that phonetically imitates a sound.

Let’s pick a dog. Fritz, the terrier mix, does experience issues when he travels to the United Kingdom. First of all, they will put him into quarantine for months, just in case he is the first dog in 150 years who has rabies. Secondly he will not be understood that well.

When he feels like playing with another dog he meets at Hyde Park, he will say “Wau”. By saying “Wau” again, he reiterates his wish to play. Or let’s say he wants to tell his owner someone is trying to break into the bed & breakfast place they are staying at, in the early morning hours. In this case he would say “Wau” several times.

His friends in England say “woof”. Those in Latin America ‘”guau”, in Japan dogs actually say “wan”, while it is “meong” in Korea, “blaf” in the Netherlands, “voff” in Iceland and “guk” in Indonesia. “Guk”? Are you kidding me? “Wau”!

“The cow says ‘moo’, the sheep says ‘baa’, three singing pigs say ‘lalalala’.” This is what it says in the cutest baby toddler book ever, written and illustrated by Sandra Boynton from New Jersey. But it’s actually “Muh”, “Mäh” and “Grunz”. Besides: The horse does not say “neigh” but “Wieher”.

Let’s not even start with cats. They say “nyan” in Japan and “yaong” in Korea. But cat language actually sounds very similar in Germany, the English-speaking world and several other countries. “Miau”, the German version, is almost like “meow” in English or “miaou” in French. Oui, mes amis!

In Germany, the duck says “Quak”, and so does the frog. The donkey says “i-a-i-a”, the rooster “Kikeriki”, the hen “Gack Gack”, the pig “Grunz” and the mouse “Piep”. The cuckoo in the woods will say “Kuckuck”. So, please, lay and egg, have a cookie and study German animal language. Do not forget the capital letter at the beginning.

Of course onomatopoeia does not end there. Slamming a wooden door will sound like “Kawumm” in German. Breaking it open might sound like “crac” in French or maybe “Knack” in German. Kicking the ball sounds like this: “Kabolz”. “Boing” is the sound of someone hitting his head on a door frame, “Klirr” the sound of breaking glass.

Clicking the left mouse button to upload this Pulitzer Prize-worthy in-depth article full of wisdom sounds like this: “Klick”.