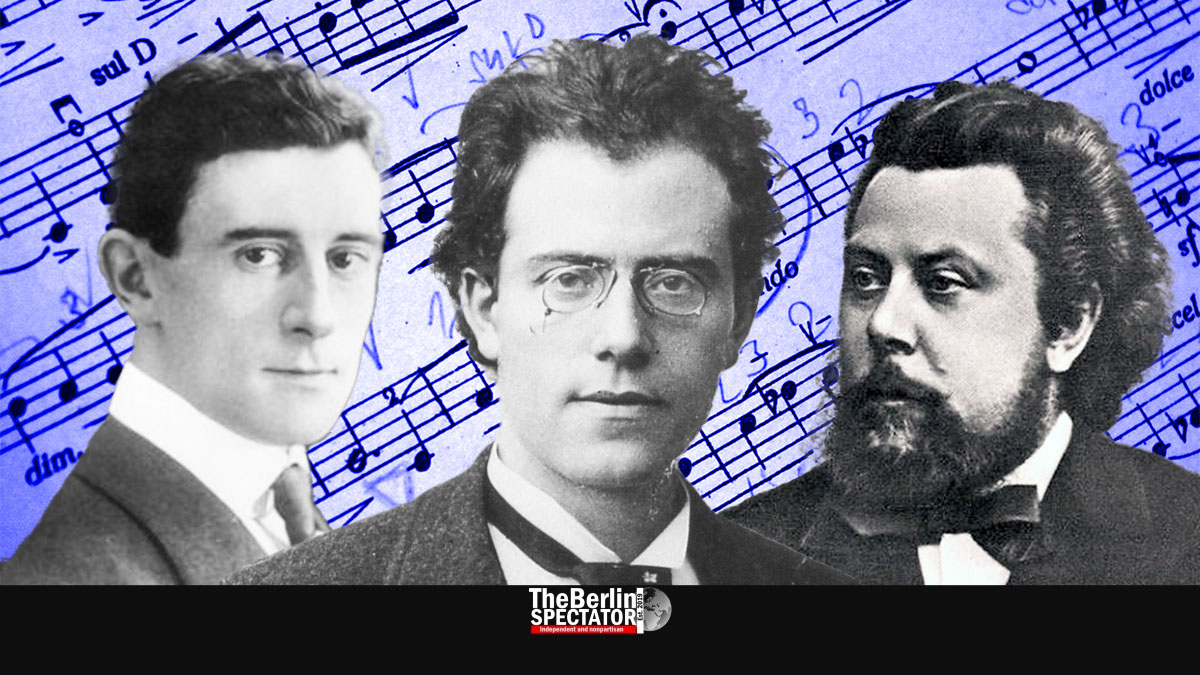 Berlin’s Musikfest will be offering a wide range of mostly classical music in late August and September of 2022. But modern music and even some Jazz are included as well. Mahler, Mingus and Mussorgsky, anyone?

Berlin, July 29th, 2022 (The Berlin Spectator) — Organize a series of concerts, call them festival, and you will attract lots of people. Start the new season with a festival, and you will sell even more tickets. Pick some of the best orchestras from all over the continent, and from overseas, and your festival will go down in history as a great event. Add stunning compositions by the most brilliant composers of all time, and your online ticket shop will probably crash because everyone wants to enter it once they get home from the beach.

The people behind Musikfest Berlin did their homework. The event sees itself as “a forum for the innovative creative work carried out by large-scale orchestras and ensembles in the genre of classical and modern music”. How long did it take to come up with this sentence? They were probably listening to Maurice Ravel while they worked on it. Some inspiration can’t hurt, right?

A total of 27 concerts are part of the happening. The whole thing commences on August 27th, 2022, at Berlin’s Philharmonie, when three strings perform a piece called ‘Musik für 3 Streicher’ (‘Music for 3 Strings’) by Wolfgang Rihm, a composer from Karlsruhe who is 70 years old and stil very active. The artists are the violinists Ilya Gringolts and Lawrence Power and their colleague on the cello, Nicolas Altstaedt. If you crave sounds by Arnold Schönberg too, this is your concert.

There is one weird aspect about Musikfest Berlin: Its official opening concert does not take place on the first, but the second day, when the Concertgebouworkest Amsterdam delivers Kaija Saariaho’s ‘Orion’, a modern piece composed in 2002, and Gustav Mahler’s Symphony no. 6 in a minor. Thank you, Klaus Mäkelä.

On August 31st, 2022, his colleague John Eliot Gardiner will be taking over the stage. His issue is the fact that there won’t be that much room up there. The Orchestre Révolutionnaire et Romantique needs a lot of space. So does the Monteverdi Choir. Once everyone managed to enter the crowded stage, the ‘Missa Solemnis’ will be presented, composed by none other than Ludwig van Beethoven.

Guess what: The Americans are coming too. While The Philadelphia Orchestra will be performing Antonín Dvořák, Karol Szymanowski and Florence Price, with Yannick Nézet-Séguin as its conductor, on September 1st, 2022, The Cleveland Orchestra is scheduled to play more Wolfgang Rihm pieces along with Franz Schubert’s ‘Grosse Sinfonie’ in C major. In this case, Franz Welser-Möst will be standing on the rostrum.

How about some Maurice Ravel, Hector Berlioz, Béla Bartók and Jean Sibelius? If you want to hear Sir Simon Rattle and the London Symphony Orchestra interpret work by all of them, plus a German premiere by Daniel Kidane, you should be at Philharmonie Berlin in the evening of September 2nd, 2022. This festival’s excellent program goes on and on. It includes the Italian Orchestra e Coro dell’Accademia Nazionale di Santa Cecilia, Rotterdams Philharmonisch Orkest, the Gewandhausorchester from Leipzig as well as several Berlin-based orchestras.

So, you want Brahms, Mussorgsky and Shostakovich performed by Yefim Bronfman? Come to Berlin. You need your ration of Berlioz, Adès and Barry? Travel to the city of cities. You are into Monteverdi, Stravinsky and Sibelius? Berlin is the place to go to.

There is a cherry on top of the tart: On September 19th, 2022, the Musikfest’s last day, the ‘Big Band der Deutschen Oper Berlin’ will be teaming up with Randy Brecker, one of the big trumpet heroes of our time, to honor the late Charles Mingus. His piece ‘Epitaph’ is the only composition on this evening’s program.

More details about Musikfest Berlin, including information about all 27 concerts and links to the online ticket shop, can be found here.