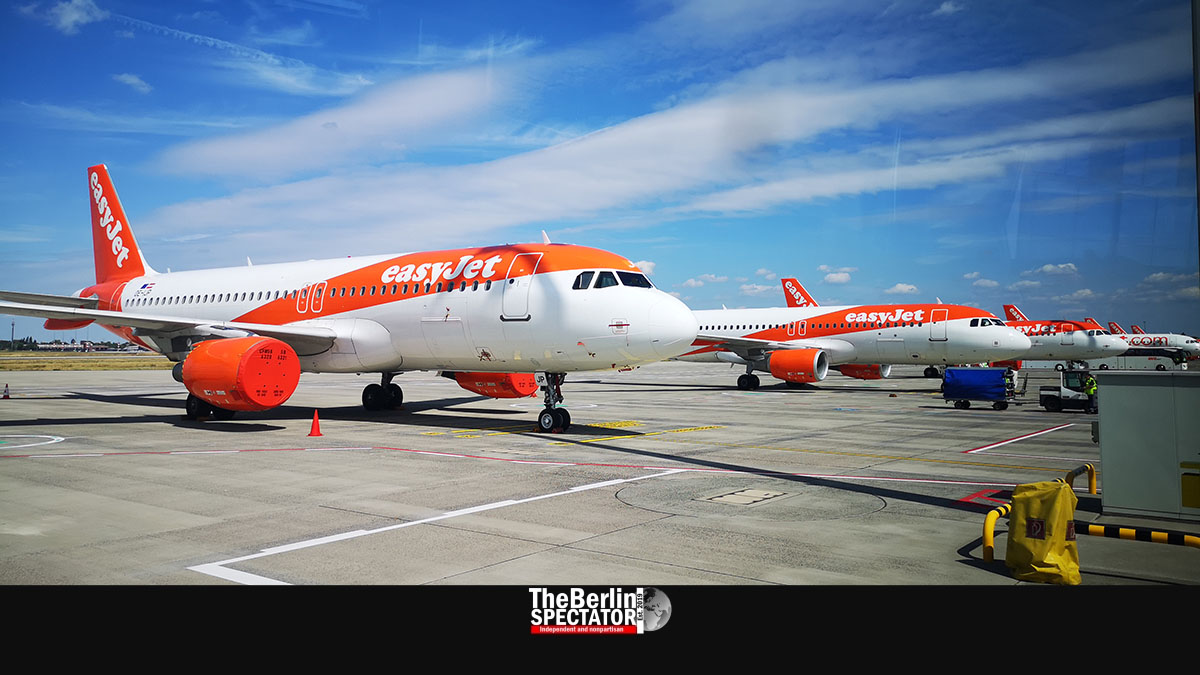 A potentially dangerous situation developed at BER Airport last week. As the Aviation Herald reports, an EasyJet plane and an aircraft owned by Air France were about to use the same runway at the same time. A takeoff and a landing were aborted.

Berlin, October 17th, 2022. Update: 12:45 p.m. CEDT (The Berlin Spectator) — A report by the Aviation Herald raises the question whether two Airbus A320s were on a collision course at BER Airport on October 12th, 2022. The potentially dangerous situation those two aircraft, their passengers and crews got into was resolved at the last moment. But how did it happen in the first place?

According to the report, an Airbus A320 with the EasyJet livery was taxiing towards Berlin Brandenburg Airport’s runway 07R on Wednesday, in order to take off on its way to Milan Linate Airport in Italy as flight no. U2-5185. At first, the pilots waited for another EasyJet plane to land, before they got the takeoff clearance they were waiting for.

Once the other jet was out of the way, they entered the runway and commenced their takeoff run. The next moment, they reduced the thrust again and taxied to the next exit in order to vacate the runway. They had a good reason to do so: An Air France flight from Charles De Gaulle Airport in Paris was approaching the very same runway from above.

The French aircraft, another Airbus A320, already was on final approach. According to the report, it was at 300 feet when it performed a go around, which means it increased its altitude and prepared for a new landing approach.

A passenger who had been on the EasyJet plane was quoted by the Herald. He said the aircraft had just stopped after a few seconds, instead of taking off. Then, the captain had said a mistake had been made at air traffic control (ATC). While there had been “incoming traffic”, his plane had been allowed to enter the runway. According to this account, the pilot apologized and announced another takeoff attempt.

The ATC provider in charge contacted the publication as well. A representative confirmed the EasyJet aircraft had been cleared to enter the runway, and it had gotten the go-ahead for takeoff. But the crew members had commenced their takeoff too late. This was the reason why the run had been cancelled.

For the German Federal Bureau of Aircraft Accidents Investigation (BFU), Germout Freitag told The Berlin Spectator, the occurrence had been an incident only. He said the BFU only launched investigations into cases classified as dangerous incidents or accidents. At BER Airport, the system had worked because both the takeoff and the landing had been aborted. Freitag conceded this was not an everyday occurrence, but added there would not be any investigation.

Another go around was performed by a British Airways aircraft above Munich’s Franz Josef Strauss Airport on Saturday. The pilots of the Airbus A319 reported an issue with the nose gear. The second attempt worked. Emergency services were prepared and both of the airport’s runways had to be closed temporarily.

Yet another incident happened on Wednesday, when a British Airways A320 on the way from Athens to Heathrow made an emergency landing in Munich because of smoke in the cockpit.