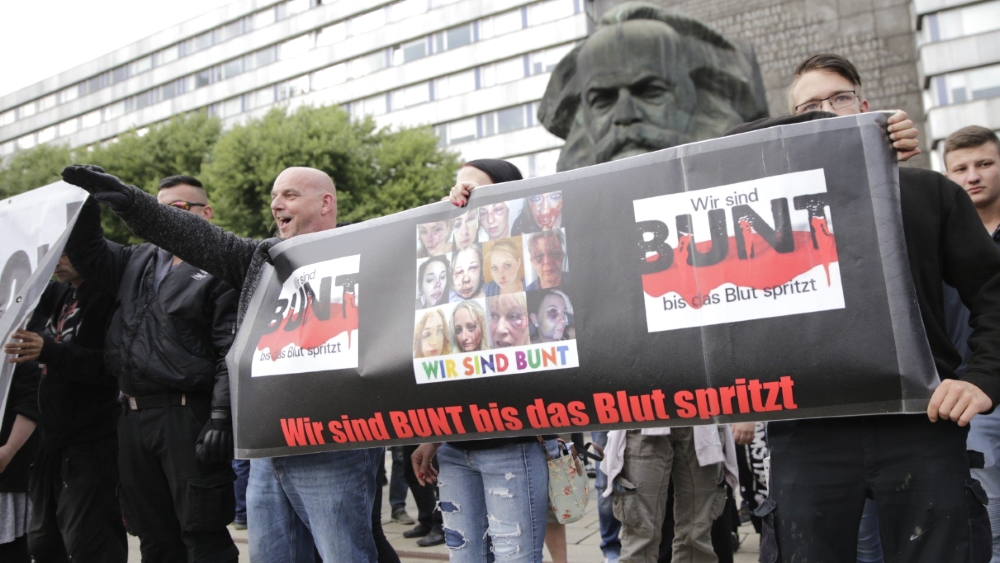 Several people were injured during two protests in Chemnitz on Monday evening. Some 2000 residents took part in a demonstration organized by the radical right-wing movement ‘Pro Chemnitz’, about 1000 joined a counter-protest. As usual, the right wingers spread their xenophobic propaganda, while the counter-protesters pleaded for an open, Nazi-free society.

Police say the situation escalated when firecrackers were lit and objects like bottles and stones were thrown. At the radical protest, several individuals were seen giving Hitler Salutes, which is illegal in Germany. At some point, the officers on site had to put on their helmets and other gear for their own protection.

The authorities announced they would investigate, in part by analyzing video footage, and bring those responsible to justice. The Jewish Forum (‘Jüdisches Forum’) reported, members of the radical party AfD had been part of the right-winger march, as well as some from the nationalist NPD.

Last weekend, the situation started escalating, when a 35-year-old German man was killed with a knife at Chemnitz’ city festival. Afterwards, a warrant was issued against a Syrian and an Iraqi suspect, for manslaughter. After the deadly incident, radicals started what was described as “hunting foreigners” in Chemnitz.

After those events, Chancellor Angela Merkel’s spokesman Steffen Seibert said it was “terrible” that a man had been killed. A police investigation was under way in order to clarify what happened, and to make sure the suspects would be delivered to justice.

Seibert said this was how things worked in a nation of law. What had happened in Chemnitz, and what was partially recorded on video, was not acceptable. Seibert condemned what he called “a hunt for people with a different look or of a different origin, and the attempt of spreading hatred in the streets”. The German government would not tolerate this kind of behavior.

As it turned out, the police in Saxony might have made mistakes again, only days after a scandal had erupted in Dresden, which had also involved police officers.

A spokesperson said on Monday night, the police had not expected that many protesters and had therefore been understaffed for a while. The operation in Chemnitz had not been failure-free. Just hours before, police chief Sonja Penzel had said she had requested enough units. “We will not let radicals take over the city”, she had stated.

At this stage it is unclear whether the situation in Chemnitz can be calmed down quickly. Police units were going to remain on site all night.

In some other German cities, a few hundred radical right-wingers and counter-protesters took to the street as well.

Saxony is generally known for wide-spread xenophobia, although it has one of the smallest percentage of foreigners in Germany. The province’s police have failed to keep radical haters from attacking refugees and other foreigners several times.