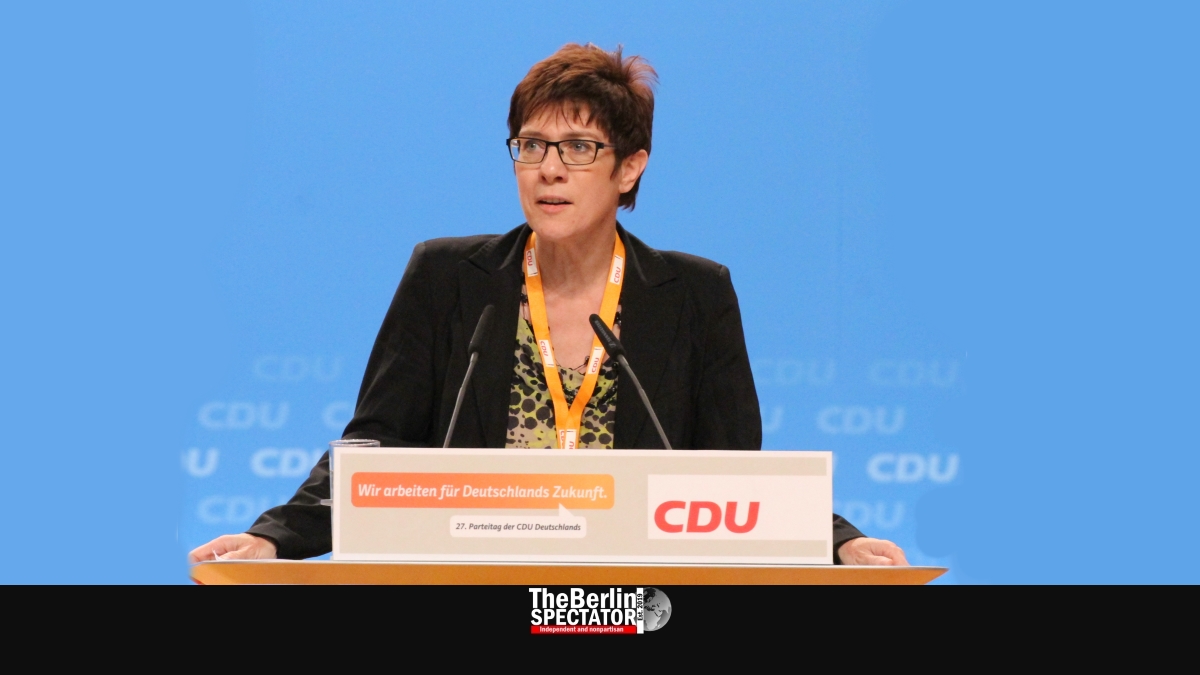 When Annegret Kramp-Karrenbauer became chairlady of Chancellor Angela Merkel’s conservative Christian Democratic Union (CDU), she was a potential successor at the Chancellery too. Once she had arrived in Berlin, she was being asked whether anyone with a name that long, and hard to pronounce, could be Chancellor. She said she believed politicians abroad would manage. Besides, there was always her abbreviation ‘AKK’.

Today, she will become the ‘AK-47’ or ‘AKK-47’ of Defense Ministers. Just two weeks ago she had said there was enough work to do for the party. Therefore she would not become part of Merkel’s cabinet. Now the exact opposite is happening. ‘AKK’ will fill a difficult position.

Angela Merkel, who is celebrating her 65th birthday today, made the announcement during a phone conference with the CDU’s board on Tuesday evening. It is a surprise to many. Some German media had gotten it wrong. On Tuesday, the German-language news magazine ‘Focus’ reported online, Health Minister Jens Spahn would move to the Defense Ministry. They had to retract their breaking news.

Ursula von der Leyen, who is Minister of Defense until today, will step down since she will be President of the European Commission. In Brussels, she narrowly won the election yesterday by getting only 9 votes more than she needed for a majority.

Annegret Kramp-Karrenbauer (‘AKK’) was Minister President of the ‘Saarland’, one of Germany’s smallest federal states, for seven years. In February of 2018, she came to Berlin, in order to become the CDU’s secretary general. Just a few months later, in December, she won against Merkel’s foe Friedrich Merz and became the party’s chairlady. Merkel had vacated that position shortly before.

While ‘AKK’ did not want to become a minister, some of her party friends disagreed. As her popularity took a hit in recent months, they argued she needed a ministry in which she could work on her popularity issue, by getting things done. The Defense Ministry is the perfect place for that kind of activity. Many problems, which Ursula von der Leyen had been confronted with, still need to be resolved.

Just hours before the news broke, Chancellor Merkel had said the important position was going to be “filled very quickly” because the Minister of Defense had the power of order. “You can’t leave this position open for long”, the Chancellor had said.

One thing is certain: ‘AKK’s new job will not be easy. She will have to work on the modernization of the ‘Bundeswehr’, the German armed forces. Certain weapons and aircraft they have do not work properly. Skyrocketing costs for the repair of a navy training vessel and other scandals are pressing as well.

Besides, it is becoming increasingly difficult to convince young folks to join the ‘Bundeswehr’. On top of it all, there is pressure from Washington and NATO to increase the German defense budget further.

At her new job, ‘AKK’ will have at least one advantage: As chairlady of the CDU she has more influence on big decisions than her colleagues. A few months ago, she had demanded an increased defense spending. Now she has the opportunity to show the country weather she will live up to her own demand.

Annegret Kramp-Karrenbauer will turn 57 in August. In 1981 she became a CDU member and worked her way up the ranks via the party’s youth organization ‘Junge Union’. For many years she was a member of the city council in the town of Püttlingen, which hardly anyone in Germany has heard of.

She ran three ministries in the Saarland province before she became Minister President (governor). ‘AKK’ is considered more conservative than Merkel, the “better Social Democrat”. For instance she argued against same-sex marriage, two years before the Bundestag allowed it.

Annegret Kramp-Karrenbauer, Germany’s new Minister of Defense, is married and has three children.