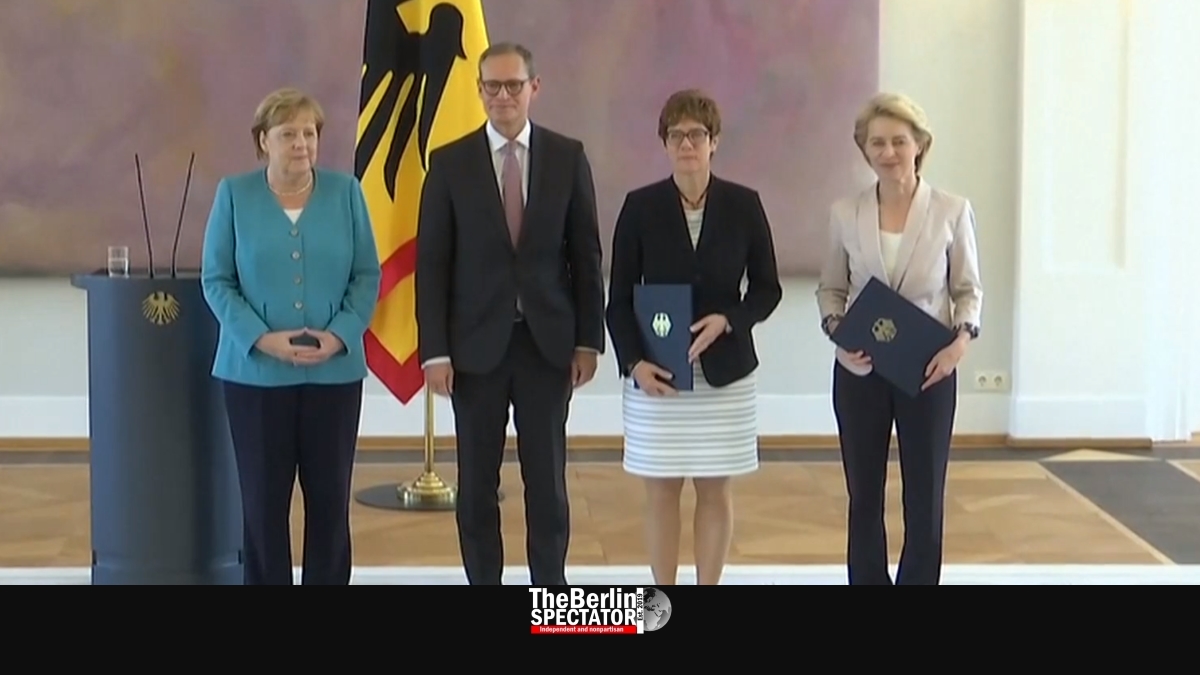 Berlin’s Governing Mayor had an important task today. Well, he does all the time, but this was different.

At Schloss Bellevue, the Social Democrat (SPD) was in the center of the universe with three Christian-Democratic (CDU) ladies. They were Chancellor Angela Merkel, the future President of the E.U. Commission Ursula von der Leyen, and the CDU’s chairlady Annegret Kramp-Karrenbauer.

Müller’s task was to hand over a certificate of discharge to Mrs. von der Leyen, who stepped down from her post as Minister of Defense, in order to be free for Europe. He did a good job on that end.

Seconds later, the Governing Mayor gave a letter of appointment to her successor Annegret Kramp-Karrenbauer, a.k.a. ‘AKK’. He wished both ladies luck for their new duties and thanked von der Leyen for running the Ministry of Defense for so many years. Six of them, to be precise.

O.k., let’s rewind this story a little. Why would the Governing Mayor of Berlin play President? Well, because it was his duty. President Frank-Walter Steinmeier is on vacation. The next in line, Daniel Günther, the President of the Bundesrat, the legislative body which represents the federal states in Berlin, was not available either.

As head of government in the city state of Berlin, Müller is Deputy President of the Bundesrat. Had he not been here, the chief driver of Berlin’s bus line 104 would have dealt with the CDU ladies. Just kidding.

Seeing Governing Mayor Michael Müller doing the President’s job filled some Berliners with pride. This kind of thing does not happen everyday, just like a major solar eclipse.

What Annegret Kramp-Karrenbauer is concerned, the German-Language weekly ‘Zeit’ just asked ‘Is she coming or going?’. The question is valid. That is because only two weeks ago she had ruled out becoming a minister. At the same time her popularity within her own party suffered.