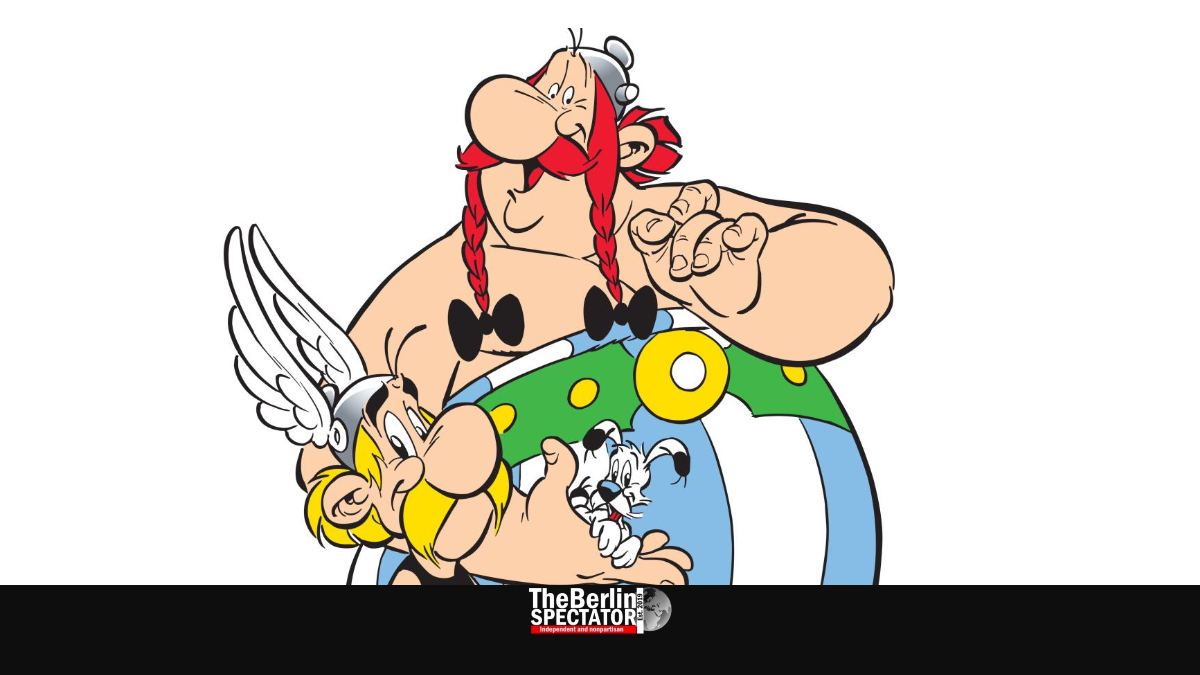 Sixty years ago, a character called Asterix first appeared in a Franco-Belgian comics magazine called ‘Pilote’. It was the beginning of an incredible success story, thanks to the gift and humor of the creators René Goscinny and Albert Uderzo.

On November 5th, 1977, the comic writer and editor René Goscinny went to his doctor for a routine check-up. During a stress test, he suddenly died from cardiac arrest, at age 51. This is the very sad part of a good story. Goscinny’s grave is located at the Jewish Cemetery in Nice (France).

With his colleague Albert Uderzo, who is 92 years old today, Goscinny had come up with something big 18 years earlier. The original idea was to create a Gaulish hero, one who would be strong enough to fight the Roman invaders. While they developed the concept, it struck them: Their hero would have to be tiny and physically weak, but smart as a whip.

They knew Asterix would need a friend. This is how Obelix came in, who is not exactly intelligent. But since he fell into the magic potion brewed by druid Getafix as a child, he has superhuman strength. We are already lost in translation here. Getafix is actually Panoramix in the original French version and Miraculix in the German version.

And this is only one little example which shows how international Asterix became. The series has been translated into as many as 111 dialects and languages, including Latin. This kind of success, which only Walt Disney managed to match, came about for many reasons, including the fact that the Asterix series is not just a funny and well-made comic, but also a history lesson.

“The year is 50 BC. Gaul is entirely occupied by the Romans. Well, not entirely… One small village of indomitable Gauls still holds out against the invaders.” This is how each of the 37 Asterix books begins. The 38th one, entitled ‘Asterix and the Chieftain’s Daughter’, will be released later this month. on October 24th, 2019.

It all started in that magazine in 1959. The first book, ‘Asterix the Gaul’ was published in 1961. A few thousand copies were sold. Just a few years later, the sales for every single book reached millions. Children, teenagers and adults could not get enough of Asterix, Obelix and his tiny dog Dogmatix, whose original name is Idéfix in both the French original and the German version.

In many of the stories, Asterix and Obelix embark on a big journey. In Britain, they want to help a relative who is facing the Romans too. Even without Asterix and Obelix, the cousin and his compatriots drive the invaders mad by constantly interrupting the battle when it is afternoon tea time. (Note: Article continues under related posts teasers).

On the Right Side of History

The Goths they visit are disciplined and militaristic, the Swiss, or Helvetians, eat cheese fondue like crazy, they are neutral and have banks. Asterix and Obelix hide in a safe deposit box in the 16th episode. In the 12th one, Asterix wins the Olympic games by tricking the Romans. But many of his adventures take place at home, in that village he needs to defend.

There are generations of fans who exclusively read Asterix comics during their early teenage years. Many still know those classic episodes by heart. The moment Obelix falls in love with Panacea (original name: Falbala) is priceless. When she is around, he can hardly speak. As a gift, he gives her a giant menhir nobody but him can carry, crested with a red ribbon.

When they do not just beat up the Romans, Asterix and Obelix attack them by shooting wine corks into their faces or by creating big arguments between them. They help Cleopatra with that big palace she promised Julius Cesar and they are always on the right side of history. They still are today.

Asterix has also grown out of those books and movie adaptions. The first French satellite which was shot into space in 1965 carries his name. In 1991, the Gaul appeared on the cover of ‘Time’ magazine. There are coins and stamps with Asterix’ face. For the 50th anniversary in 2009, he appeared on Google Search’s main page.

As it turned out, the Asterix series did not completely fill his authors’ capacity. René Goscinny also authored the Lucky Luke series about the cowboy who shoots more quickly than his shadow. He also wrote the funny children’s book series ‘Le Petit Nicolas’. And he worked on many other comics.

Goscinny was the son of Jewish immigrants from Poland. Albert Uderzo, whose actual first names are Alberto Aleandro, has Italian roots. After Goscinny’s sudden death in 1977, he took over the writing as well. Up to that moment he had been the illustrator only. There are purists among the big Asterix fan community who adore all books until 1977.

But most kept on reading afterwards as well. Recently, Asterix has become a little too politically correct, according to old fans, because today’s authors (Uderzo sold his rights a few years ago) wanted to modernize him. But he is still Asterix, the hero so many can identify with, who defies the Romans.