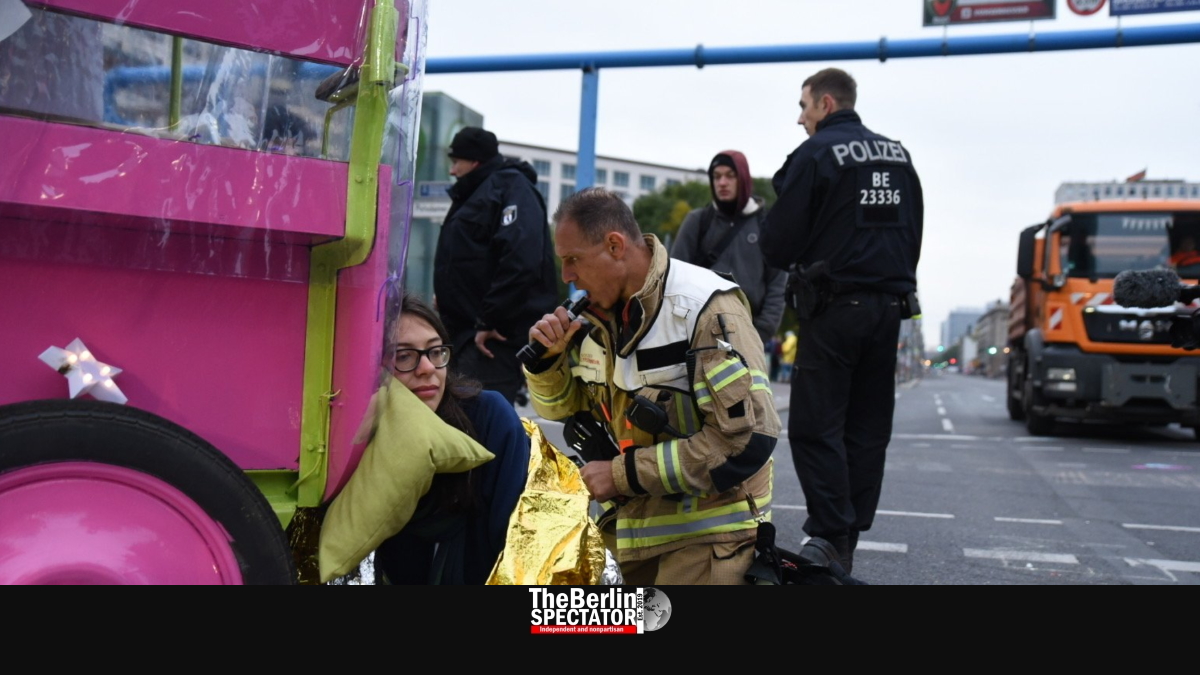 After keeping Berlin’s police department busy with two blockades in the city center of the German capital and disrupting traffic for almost a day, the Extinction Rebellion movement apologized to Berlin for the “disturbance”. At the same time, the activists are planning more of those.

Extinction Rebellion started blocking important intersections in Berlin on Monday, by protesting at the square around the city’s Victory Column and at ‘Potsdamer Platz’ square. At the latter location, their protest was registered and approved until 2:00 p.m. on Monday. But the participants refused to move away when the police told them to.

No Breakfast at Potsdamer Platz

In the late afternoon, officers started to carry protesters away. They loaded many items the participants had brought, including plants in flower pots and furniture, onto a truck. On Tuesday morning, some protesters were still on the intersection at ‘Potsdamer Platz’. They had chained themselves to heavy objects.

Firefighters arrived to cut the chains, so that the last participants could be carried away. Chalk drawings the protesters had left could still be seen on the street, during the police department’s efforts to free the intersection. Extinction Rebellion had brought many items to the location in a huge Diesel truck. (Note: Article continues under ‘Related Posts’ teasers).

After 9:00 a.m., firefighters cut a pink bathtub apart and took it to the sidewalk, along with protesters who had chained themselves to it. Activists complained the participants who were still blocking the intersection were “not allowed to get breakfast”, while officers were struggling to end the situation.

“We regret the disturbance, Berlin”, the organization’s division in the German capital twittered on Tuesday, while firefighters and police were still working on vacating the intersection. “But the climate crisis was ignored for 30 years. We finally need real measures!”

On Wednesday, Extinction Rebellion intends to block ‘Kurfürstendamm’, one of Berlin’s most famous shopping streets, and Marshall Bridge. The movement also has a camp at the Chancellery, it conducts “meetings with experts” and ballots about steps it wants the government to take.

“This is how democracy works”, protesters chanted on Tuesday morning, while their colleagues were carried away by police officers. Carola Rackete, who recently became famous as a captain of a rescue ship who refused to obey orders from the Italian government regarding refugees she was transporting, is a member of Extinction Rebellion now.

“I am here because the German government does not do enough to prevent the extinction of our biological diversity”, Rackete said in a statement. She accused the Berlin government of infracting the Paris Agreement on greenhouse-gas emissions.