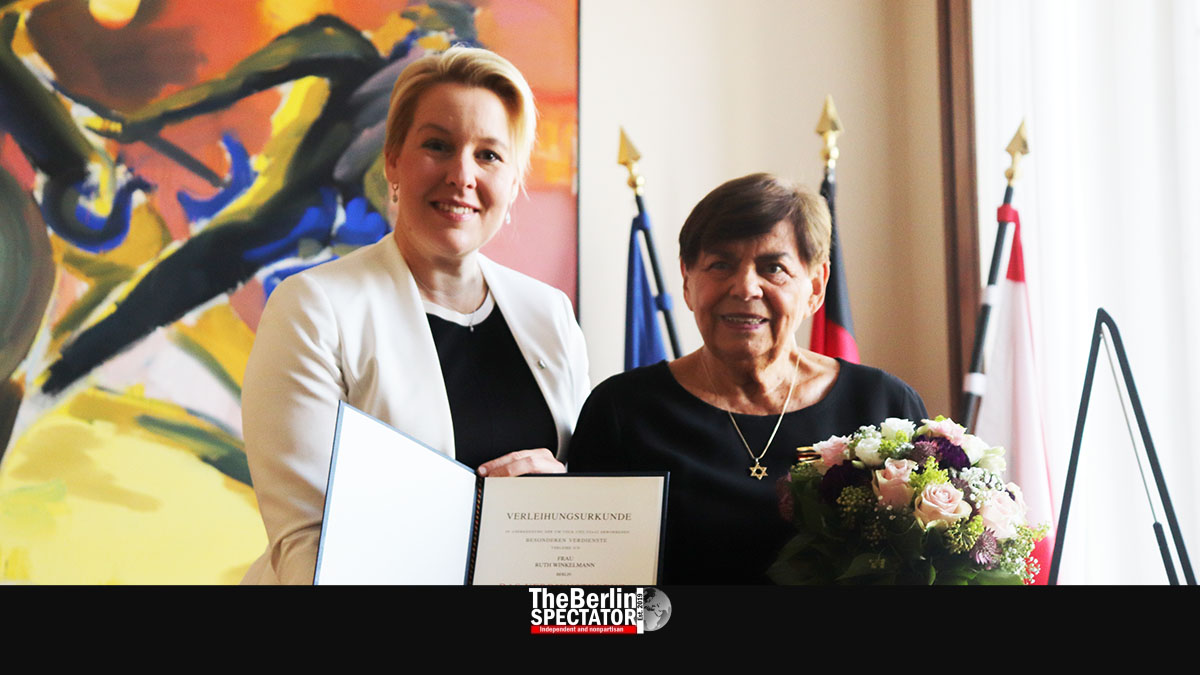 Berlin, September 23rd, 2022 (The Berlin Spectator) — For President Frank-Walter Steinmeier, Governing Mayor Franziska Giffey handed over Germany’s highest honor, the Order of Mirit, to Ruth Winkelmann. Twenty years ago, the 94-year-old Holocaust survivor whose Jewish father was murdered by the Nazis began telling school children what she went through.

In her mid-90s, Ruth Winkelmann was still talking about her fate in front of young people, Franziska Giffey said during a small ceremony at Red City Hall. She had the gift to explain vividly what the cruel Nazi regime had done to people. It was important to have Ruth Winkelmann and others who could share their experience from back then, especially in times like these in which there were anti-democratic tendencies again, the Governing Mayor said.

Mrs. Winkelmann thanked the Mayor for the honor. She said because nobody had succeeded in taking Berlin away from her, she had decided to stay in the city. This was important to her. At the ceremony, she was accompanied by her son and her two grandsons.

Ruth Winkelmann was born in Berlin in 1928 as the daughter of a Jewish father and a Christian mother. Early on, she experienced how the German capital turned into the center of power of the Nazis. They made her a forced laborer when she was only 14 years old. Later, she survived by hiding in a garden colony. Because of her father’s religion, her parents were forced to divorce and he was murdered in Auschwitz.

A few years ago, Ruth Winkelmann co-published a book about her history (in German, the title is “Ruth Winkelmann: Plötzlich hieß ich Sara”). She is the only Jew in her family who survived the Holocaust. Decades later, in 2002, a coincidence made her agree to talking to school kids once. Since, she has been very active at many schools.

At today’s ceremony, Franziska Giffey said Ruth Winkelmann’s statements about her fate included locations in Berlin everyone knew even today. That way, her story would become even more vivid. Today’s kids could actually understand what had been happening to people who had been their age at the time.