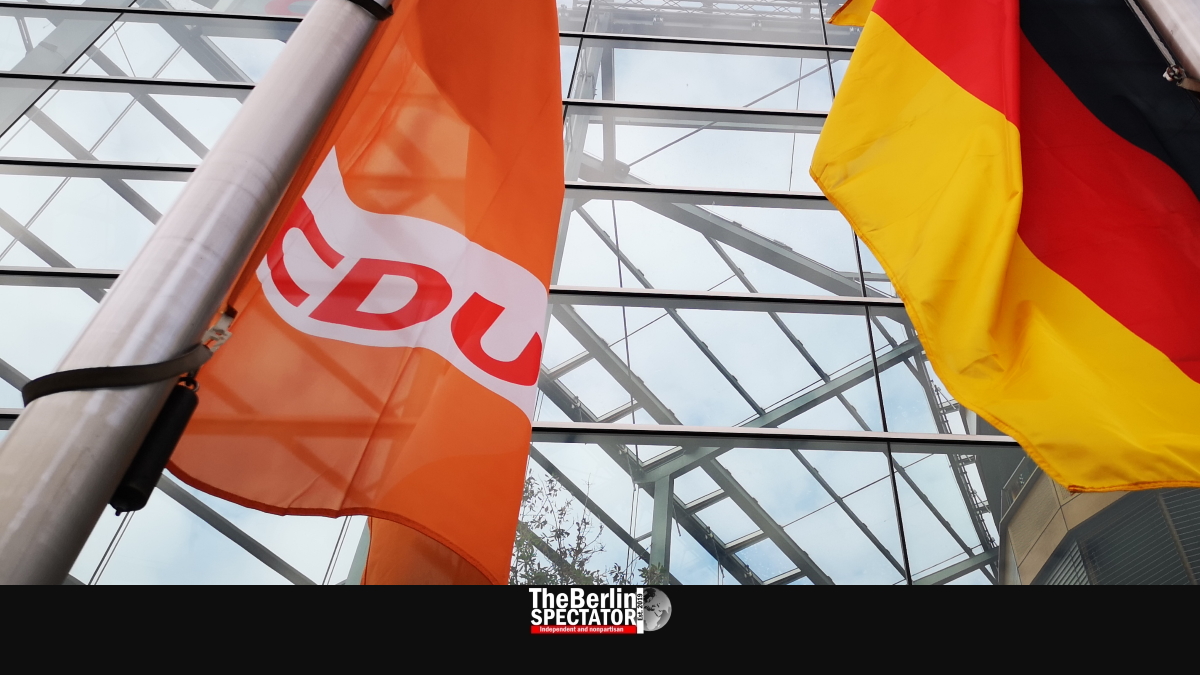 In Germany’s last big-tent party, the conservative CDU, issues are piling up. There are challenges, both internal and external ones, which need to be confronted at the party’s convention in Leipzig.

The Christian-Democratic Union (CDU) wants to avoid ending up like the SPD, the other former major party in Germany which has shrunk like a deflated balloon. But the behavior of some high-ranking members in Chancellor Angela Merkel’s conservative organization might lead to an escalation of several conflicts that are already shaking it. The danger is that the SPD effect might hit the CDU too.

Power Struggle Not Over

There are many open questions. It has not even been a year since Annegret Kramp-Karrenbauer (a.k.a. AKK) became chairlady at the last convention in December. She defeated her competitor Friedrich Merz by a narrow margin. Whoever thought AKK’s victory resolved the power struggle inside the CDU needs to think again.

Pushed by certain media, Friedrich Merz is not planning to just disappear. He still wants to be the next Chancellor of the Federal Republic of Germany, when Angela Merkel vacates the position in 2021, the latest. The question is whether he is willing to take a big risk, by trying to take down AKK in Leipzig in order to replace her.

Angela Merkel is trying hard not to get involved in arguments within her party. At this stage, she is even ignoring criticism in her own ranks, by taking decisions which are not popular in the CDU. On the other hand, she was the one who brought AKK to Berlin and who wanted her to be her successor, not just as the CDU’s chairlady, but also as Chancellor, meaning she might try to defend her.

Tip of the Iceberg

In German-language media, commentators are outperforming themselves. Some believe, Merz will reignite the power struggle by confronting Annegret Kramp-Karrenbauer directly and in front of the world, so to speak. Others believe his announcement according to which he just wants to talk about general political matters, when he takes the stage at the convention in Leipzig.

The truth is that AKK has not always delivered persuasive speeches. She has not convinced everyone she is the right person to move into the Chancellery. Many, including younger CDU members, believe Friedrich Merz is able to thrill the masses, while they doubt AKK could do so.

But this problem is only the tip of the iceberg. The CDU, which has been an anchor of stability for ages, in the eyes of many Germans, is being challenged by the far-right extremists of the ‘AfD’. Quite a few CDU representatives in legislative assemblies in the eastern part of Germany are ready to cooperate with the radicals. To Merkel, AKK and the rest of the leadership, any such thing is a taboo nobody should break.

There are many more conflicts with the potential to cause more earthquakes within the CDU:

As if all of the above wasn’t more than enough already, some members want to discuss a two-term limit for Chancellors. The United States, where Presidents have a two-term limit, may have inspired the supporters. The late Helmut Kohl was in office for 16 years, Merkel is coming close to that kind of duration.

The way candidates for Chancellor are being picked is yet another aspect which will be discussed. Some CDU folks want the entire party base to be involved in the decision. The CDU’s Bavarian version, called CSU, wants to avoid anything of the kind. Its chairman Markus Söder may want to become Chancellor himself, and his chances might be better if the party leaderships take that decision on their own.

Do you like this article?
If yes: Would you consider supporting this publication?
Your donation would make things a lot easier for us. Thank you.
Please visit our donation page or go to our Paypal page directly.