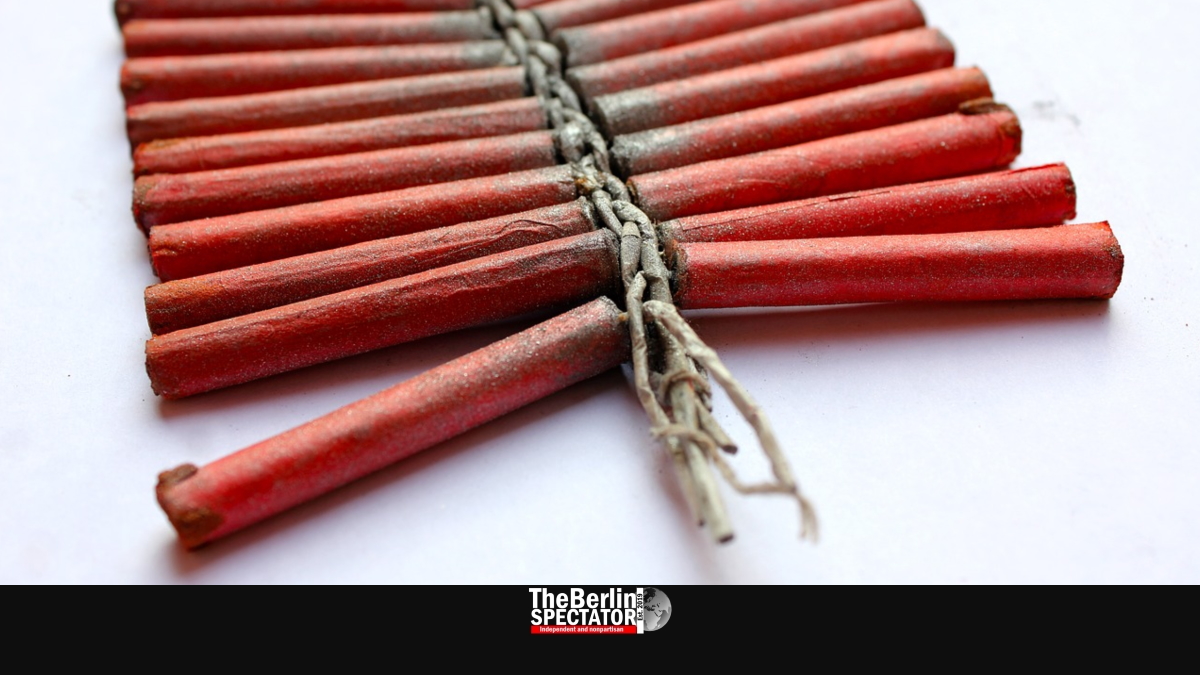 Updated on December 7th, 2019: Many cities in Germany have imposed firecrackers and fireworks bans in certain zones, for New Year’s Eve. Berlin added two more of them. There are several reasons for bans of this kind.

In Germany, firecrackers and New Year’s Eve belong together like plum cake and cream, Laurel and Hardy or macaroni and cheese. For many decades, Germans have blown up their firecrackers and lit their private fireworks on the last day of the year. Especially young, male Germans love this tradition.

This is how it works: Firecrackers and fireworks for private use are being manufactured all year long, but they can only be sold from December 29th to 31st according to the law. When the 29th is a Sunday, which is the case this year, retailers can start selling them a day earlier. In spite of the restrictions, Germans spend around 130 million Euro (144 million Dollars or 116 million Pounds Sterling) on firecrackers and similar items every single year.

In Germany, those crackers can be used on December 31st and January 1st only. Some municipalities have restricted the use further. But wherever they are, users need to watch it. Lighting firecrackers or fireworks near hospitals, homes for the elderly, children’s homes, churches or houses with thatched roofs has always been forbidden.

There are different kinds of firecrackers for private use. Class I products, like table fireworks or snowberries, may be used from the age of 12, while Class II bangers are for adults only, from the age of 18. In spite of all of these rules that have applied for a long time, problems keep on popping up.

Berlin recently imposed new banger bans, one on the northern part of ‘Alexanderplatz’ and one at ‘Pallasstrasse’ in the Schöneberg borough. One more banger free zone, at ‘Strasse des 17 Juni’ and ‘Pariser Platz’, already existed before the latest decision was taken. Berlin intends to penalize offenses.

In this case, the authorities took this step because of attacks against fire fighters and police in the past years. In Schöneberg, police had been forced to end a street riot involving 150 mostly drunk individuals last time around. Berlin wants to avoid this kind of situation in future. In January, the city state’s Interior Senator Andreas Geisel is the one who pushed for bans.

To him, Hanover is a good example. The city imposed a banger ban in its center last year. That is because many residents had constantly shot fireworks rockets at people, including at police and fire fighters. The only problem: Enforcing a ban of this kind requires many police officers on duty.

There are people and organizations in this country who want to go a lot further. In July, the ‘Deutsche Umwelthilfe’ (DUH), an organization for environmentalism and consumer protection, demanded a complete firecracker and fireworks ban in 31 large German cities because of the particulate matter emissions caused by their use.

In Hamburg, the environmental authority does not like fireworks either. But those in charge say the air pollution aspect alone did not justify a ban. On the other hand, all the trash on the streets was a good reason to add restrictions.

Hamburg already has banger ban zones at ‘Jungfernstieg’, located right at the ‘Binnennalster’ lake, and along the Elbe riverbanks. The motivation here was neither the pollution nor the trash, but injuries many people had sustained during New Year’s Eve in the past.

Aachen, Düsseldorf, Köln and Bielefeld, four cities in North-Rhine Westphalia, Germany’s largest province, have ban zones as well, mainly to protect historic buildings such as the Cologne Cathedral and smaller medieval buildings. Frankfurt am Main just intends to apply the usual rules: No fireworks or firecrackers near hospitals, churches and buildings with thatched roofs. An increased police presence is supposed to enforce those rules on New Year’s Eve.

In other European countries, such as France or Greece, individuals do not use bangers, fireworks or anything alike. In Czechia, the authorities imposed a firecrackers ban on Prague.

All in all it is safe to say that firecrackers are not healthy. They can damage people’s air passages and impair their hearing. Generally speaking, fans of loud firecrackers are often not interested in concerns of this kind or in what the authorities say, especially when they are drunk, which most of them are on New Year’s Eve.