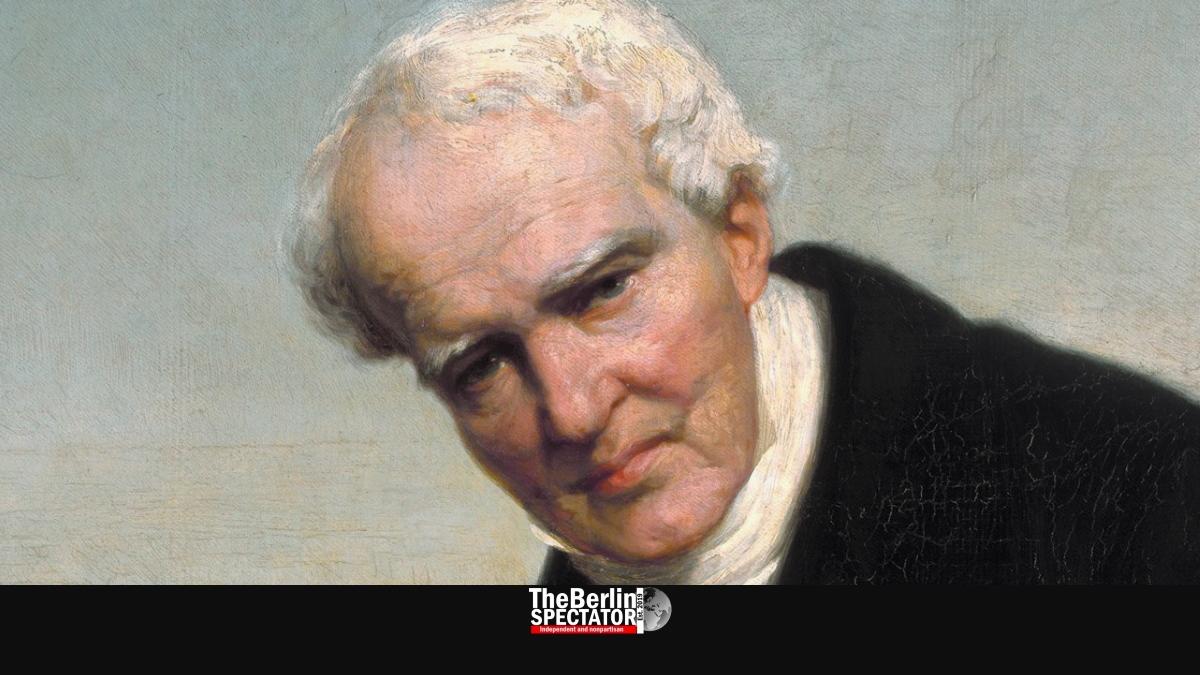 Alexander von Humboldt was a universal scholar who worked on his research relentlessly. His 5-year expedition on the American continent, his best-known project, is only a fraction of the scientist’s achievements.

He was born in Berlin 251 years ago, and he died here 89 years later. In between his birth and his death, Alexander von Humboldt, honorary citizen of the German capital, did more research in the fields biology and chemistry than entire universities managed to come up with. And this is not even the aspect he is mainly known for.

The Academy of Sciences in Paris called Alexander von Humboldt “the new Aristoteles” because of the quantity and scope of his contributions. Within Germany, he was highly respected during his lifetime, and even more so in the present. Today’s ecologists admire von Humboldt as a pioneer in their field. Other movements invoke him too.

He busied himself with studies in geology, mineralogy, oceanography, zoology and botany. Geography as an empirical research subject was not even known before Alexander von Humboldt. He basically co-invented it. Also he communicated and exchanged knowledge with colleagues.

Von Humboldt’s greatness also reflects in his condemnation of slavery. Since he was protected by Spain, criticizing it openly and directly would have jeopardized his big expedition. But his notes in his many travel diaries do show his stance in this regard. He was horrified about the treatment of slaves.

The State Library in Berlin exhibited some of the explorer’s diaries when his 250th birthday was marked last year. They are notebooks full of descriptions of what Alexander von Humboldt found in America. Since he was also a good draftsman, countless illustrations give insight into his discoveries as well.

Even while he was looking for support for his expedition in America, he collected scientific data. For instance, he delivered geographical knowledge about the intra-Spanish plateau during a very long walk to Madrid, after Napoleon’s politics and wars had delayed the big American trip.

The Spaniards were impressed by Alexander von Humboldt, who turned out to be a good diplomat too, on top of it all. He received documents which would make sure the governors in Spain’s colonial territory in Latin America would support his endeavor. The Portuguese, on the other hand, were afraid of the German explorer and banned him from entering Brazil.

Two hundred and twenty-one years ago, 307 years after Christopher Columbus’s trip, on June 5th, 1799, Alexander von Humboldt set sail towards America, aboard the Spanish frigate ‘Pizarro’. When they took a one-week break in Tenerife, he researched the crater of the island’s volcano. It looks like von Humboldt never just relaxed.

On July 16th, 1799, he and his entourage reached Cumaná in Venezuela. He was disgusted when he saw how the slaves were being treated there and headed towards Caracas.

His first big expedition on the American continent took him to the Orinoco and Rio Negro. On the way, von Humboldt hardly had room for all the instruments he was bringing along, and for the birds, apes and other animals he caught and put in little cages. During the trip, he, his colleague Bonpland and their people faced dangers, sickness and excessive heat.

In 1801, the second expedition to Cartagena and Lima commenced. They climbed up the Andes. In his notes, von Humboldt complained that “thick woods and morasses” made advancing difficult. With his colleagues, he climbed the Chimborazo. They almost reached the peak and broke a record by becoming the first climbers who had reached any spot this high.

The third part of the expedition in America began in Acapulco in early 1803. From there they went to Mexico City, where they stayed and researched for nine months, before heading further east, to Veracruz. Before heading back to Europe, the explorers went to the United States, where von Humboldt was admired as well, as an explorer and scientist.

In Washington D.C. and Philadelphia, they stayed with President Thomas Jefferson. But on August 3rd, 1804, the ship reached Bordeaux. Alexander von Humboldt had paid for the 5-year expedition himself. He was the first private citizen to embark on a journey of this kind. Back in Germany, he did all kinds of research.

Berlin’s Governing Mayor Michael Müller honored von Humboldt last year. He was still alive in the world’s memory, Müller said. His achievements as an explorer and thinker were still current, a quarter millennium later. The universal scholar, globetrotter, cosmopolitan and Berliner Alexander von Humboldt was a timeless and very popular ambassador of “our city”, the Governing Mayor stated.

Von Humboldt had been a liberal who had acknowledged the universal human rights and who had realized “the absurdity of racist thinking.” Today’s Berlin could only try to live up to his legacy, Müller said in a statement for von Humboldt’s 250th birthday. The 251st one is coming up on September 14th, 2020.