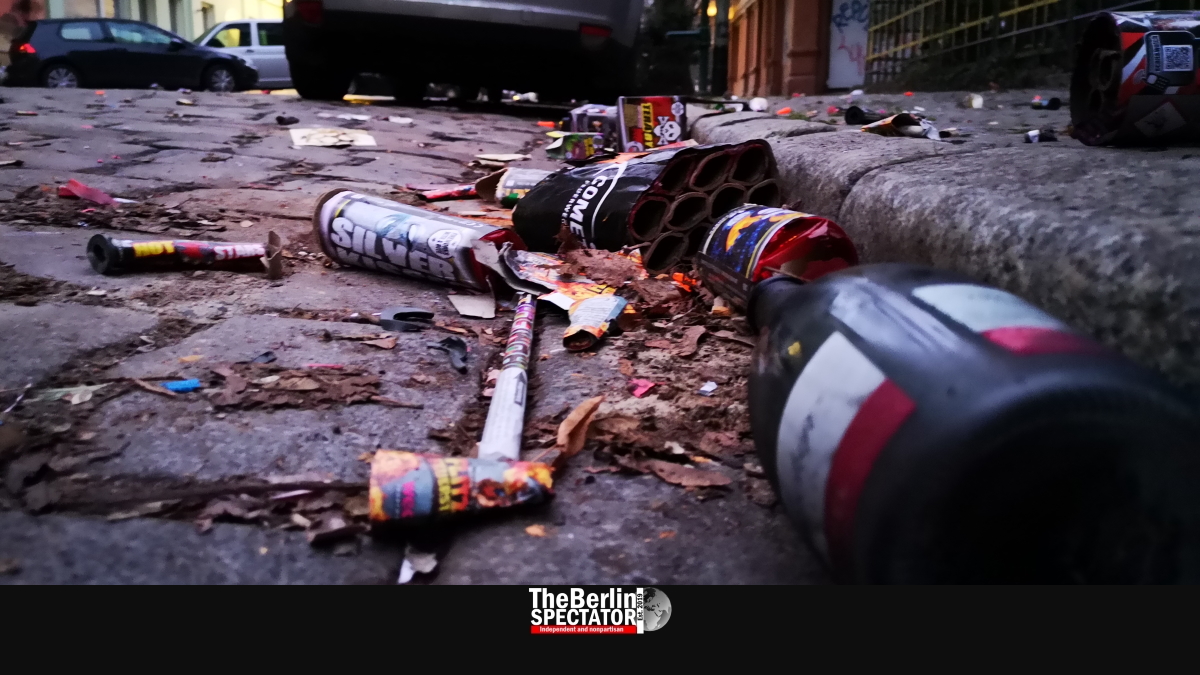 In Germany, environmental protection organizations and Green politicians have demanded a fireworks and firecracker ban on New Year’s Eve for a long time. With Corona, they got their most convincing argument to date.

Berlin, November 19th, 2020, (The Berlin Spectator) — The NGO Environmental Action Germany (DUH) is demanding a ban of private fireworks and bangers on New Year’s Eve. For years, its representatives have said any additional air pollution needed to be avoided, also because it would cause respiratory diseases. According to the DUH, particulate matter pollution brought about by firecrackers would have an even more negative impact this year. The reason the environmentalists are citing now is the fact that the Coronavirus is attacking the respiratory tract as well.

As it turns out, the DUH is not alone with this demand. The Greens in Berlin want a ban as well. Their floor leader at the Berlin House of Representatives, Antje Kapek, says the hospitals in the German capital already had to deal with COVID-19, which was more than enough.

For years, the Berlin Greens have cited environmental reasons for a ban. With Corona, they added one more reason to their list. They now say Berlin should follow the Netherlands. Last week, the Dutch Prime Minister Mark Rutte announced a complete ban on fireworks and firecrackers this year. He said it was “an important step to relieve hospitals, protect medics and avoid new Corona infections.”

What Rutte referred to was the fact that fireworks do not only cause injuries, but they lead to more New Year’s Eve parties. But, because of the danger of Corona infections, they need to be avoided as much as possible. In Germany, many people see it the same way. Others do not. For the SPD (Social-Democratic Party) in Berlin, Frank Zimmermann told the ‘Tagesspiegel’ daily the other day, he was asking himself whether a ban would be an overreaction because it would deprive people of fun.

Just before the Coronavirus hit, several German cities had put in place firecrackers and fireworks bans in certain zones. A year ago, Berlin added two more of them. Other cities banned pyrotechnics from their city centers, in spite of the fact that lighting firecrackers and fireworks has been a German tradition for decades. But doing so near hospitals, homes for the elderly, children’s homes, churches or houses with thatched roofs has always been forbidden.

The German pyrotechnics industry is big. Firecrackers and fireworks for private use are being manufactured all year long, but they can only be sold from December 29th to 31st, according to the law. In spite of the restrictions, Germans spend around 130 million Euro (144 million U.S. Dollars or 116 million Pounds Sterling) on firecrackers and similar items per year. In 2019, it was a bit less.

There are different kinds of firecrackers for private use. Class I products, like table fireworks or snowberries, may be used from the age of 12, while Class II bangers are for adults only, from the age of 18. In spite of all of these rules that have applied for a long time, problems keep on popping up.

Problems with Firecrackers and Bangers:

> They scare people and animals, including dogs.
> The use of firecrackers leads to severe injuries and fires in buildings.
> These products are often being used by intoxicated people who do not care about anything at all.
> Recently, more and more pedestrians, but also police officers and rescue workers, have been attacked with firecrackers and fireworks products.
> Firecrackers cause huge amounts of trash on the streets all over Germany.
> These products also pollute the air. On New Year’s Eve, the particulate matter concentration skyrockets every time.

Berlin recently imposed new banger bans, one on the northern part of ‘Alexanderplatz’ and one at ‘Pallasstrasse’ in the Schöneberg borough. One more banger free zone, at ‘Strasse des 17 Juni’ and ‘Pariser Platz’, already existed before the latest decision was taken. Berlin penalizes offenses. Earlier this week, a spokesman for Berlin’s Senate Administration of the Interior told The Berlin Spectator, decisions about this year’s policy would be made in the next two weeks.

In the past years, it became clear that enforcing fireworks bans is hard. It requires many police officers. Still many big cities go for bans in certain areas, for different reasons. In Hamburg, the environmental authority does not like fireworks. But those in charge say the air pollution aspect alone did not justify a ban. On the other hand, all the trash on the streets did.

Hamburg already has banger ban zones at ‘Jungfernstieg’, located right at the ‘Binnennalster’ lake, and along the Elbe riverbanks. The motivation here was neither the pollution nor the trash, but injuries many people had sustained during New Year’s Eve in the past.

All in all it is safe to say that firecrackers are not healthy. They can damage people’s air passages and impair their hearing. But fans of loud firecrackers are often not interested in concerns of this kind or in what the authorities say, especially when they are drunk, which most of them are on New Year’s Eve. Especially in connection with Corona, this is another reason why a general ban might make sense indeed.

This is what Rainer Wendt, the head of the German Police Union, believes. He told the ‘Bild’ daily, the use of fireworks usually led to the consumption of alcohol in groups of people and party moods. A ban was necessary this year.