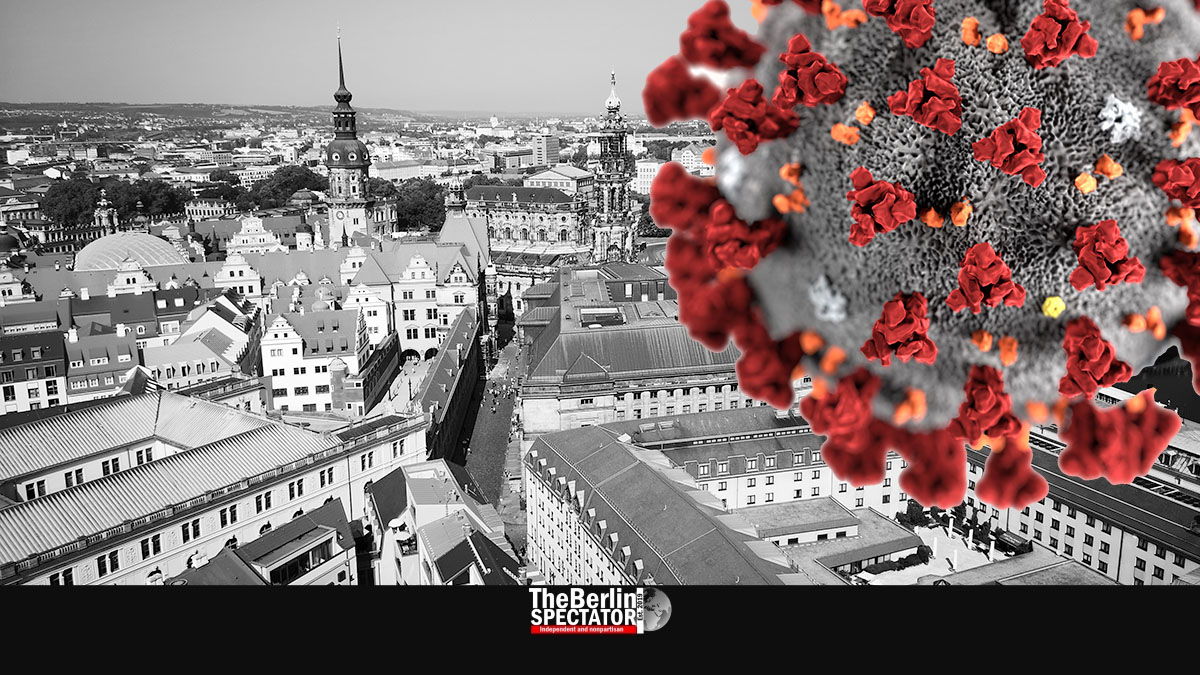 Because the infection numbers in Saxony are extremely high now, the state’s government is considering unprecedented steps. Those include cordoning off some areas.

Berlin, December 17th, 2020, update 1:50 p.m. (The Berlin Spectator) — Since the Corona infection numbers keep on rising in the federal state of Saxony, the authorities are checking whether there are stricter measures they can apply. According to the ‘Freie Presse’ daily, the state government is looking into cordoning off entire communities when their Seven Day Incidence Numbers reach a certain level. The government in Dresden had confirmed it was considering this kind of step, the ‘Freie Presse’ writes. It would be an unprecedented measure in the Federal Republic of Germany.

Extending the nightly curfews in Saxony is another step the state government under First Minister Michael Kretschmer is reportedly thinking about. This would mean that residents could go shopping during a set time period only. A spokesman for the Dresden government said additional steps might be taken in case the infection numbers could not be decreased with the measures that were in place already.

Two days into Germany’s strict lockdown, other federal states in Germany are discussing stricter Corona rules as well. Up in the north-east, Mecklenburg-Hither Pomerania intends to put in place a quarantine for residents who return from high risk areas in other parts of Germany. But the Schwerin government says it will not prevent people from visiting relatives in high risk areas during the Christmas holidays. Those plans sounded contradictory to observers.

In some cases, the differences between rules in Germany’s federal states seemed unconventional, like many other aspects in this crisis. The RBB reports, there was some confusion in Berlin and Brandenburg. In spite of the fact that these two states had wanted to put in place the same Corona rules, there is at least one big difference: Brandenburgers who go to neighboring Poland to buy tobacco products or to fill up their gasoline tank for lower prices have to go into quarantine for ten days when they return, while Berliners do not.

So far, the number of Corona infections in Germany is not really decreasing. The Robert Koch Institute first reported 26,923 new cases in the past 24 hours, then it corrected the number. Now there are more tan 30,000. With 698, the number of related deaths in the same time period remains very high as well.

Saxony is Germany’s main Corona hotspot now. In some counties, the Seven Day Incidence Number, which is supposed to be below 50 to be relatively safe, exceeded 600. This applies to Sächsische Schwerz Osterzgebirge, where the Incidence Number hit 600.2 and to Bautzen, where it stands at 631.2. Bavaria has one region with this kind of level as well. Regen county reported a level of 617.5. The Seven Day Incidence Number shows how many persons per 100,000 inhabitants have been infected with Corona within seven days.

In Dresden, Saxony’s capital, all 87 ICU beds in the city’s hospitals are occupied. In all other wards, 91 percent of all beds are taken. This alarming situation was reported by the city itself. Generally, experts believe the Corona situation in Germany will deteriorate further before it improves.