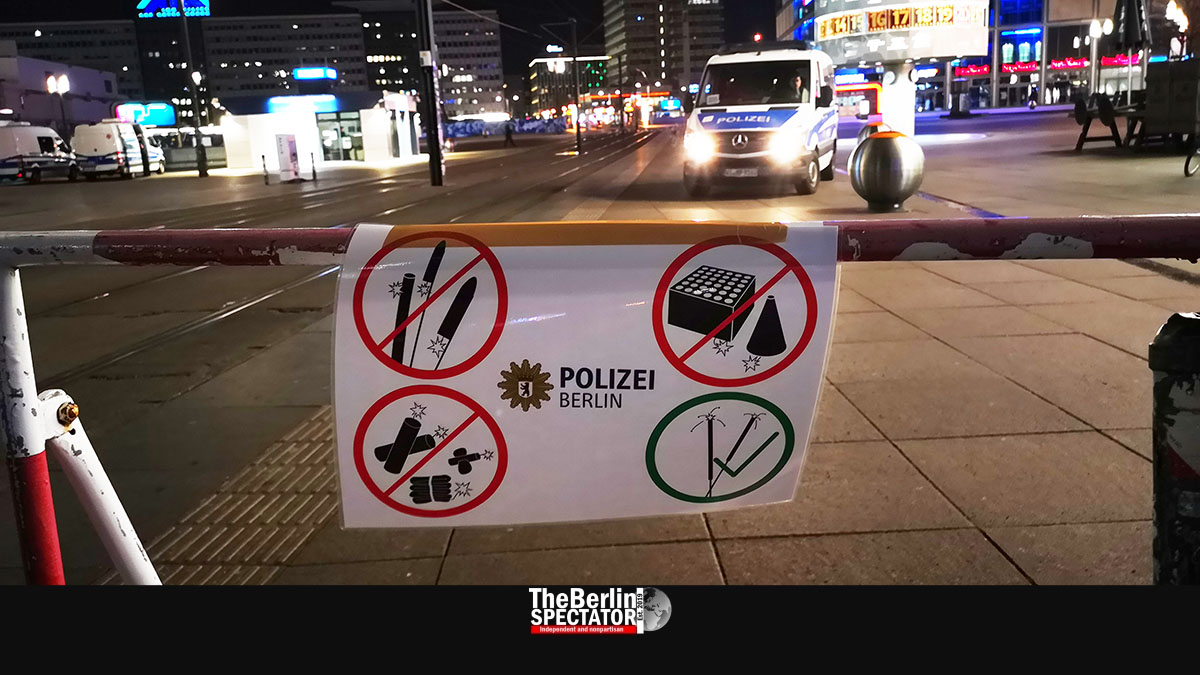 In Berlin, thousands of police officers from several federal states were on duty on New Year’s Eve. Luckily, there were less problems than anticipated, but some attacks against officers took place.

Berlin, January 1st, 2021, update 5:57 p.m. (The Berlin Spectator) — Berlin’s government and parliament district was guarded by dozens of police officers from the federal state of Baden-Württemberg on New Year’s Eve. Almost all of them had come to Berlin from the region between Karlsruhe and Baden-Baden, some 700 kilometers (435 miles) away, in order to help the Berlin Police Department.

The guests did a good job. At around 10:00 p.m., at the government district, The Berlin Spectator’s reporter was checked every 50 meters, a total of six times. No illegal protests were staged, the situation was calm, since the area around the Chancellery and the Bundestag was kept absolutely empty.

A few steps away, at Brandenburg Gate, even more cops protected a big show staged by ZDF television. There was no audience on site, for obvious reasons, but millions of Germans watched it from home. Why they even went through the anguish of setting up the giant stage and all the equipment needed is a mystery. They could have produced the show in their main studio in Mainz, with a big Brandenburg Gate backdrop.

Friedrichstrasse, one of Berlin’s most elegant shopping streets, and Gendarmenmarkt square would have been crammed under normal circumstance. On New Year’s Eve, after 10:00 p.m., the atmosphere was almost spooky because nobody was there.

A few blocks away, several police officers were dealing with a group of eight adult pedestrians who had been walking through the city center. This was a clear offense. Because of the alarming Corona situation, up to five adults from up to two households may gather. Whether the members of that group will have to pay fines or not, was not known.

Berlin had set up as many as 56 firecracker ban zones. One of those, at Alexanderplatz square, was definitely enforced. The police cordoned off the entire square. A small group of young men came along in the late evening. They were disappointed when they saw signs which reminded people of the banger ban there, and police officers who made sure the square was quiet.

At Hermannplatz square in Berlin’s Neukölln district, and at two more firecracker ban zones, police stopped groups of people who were drinking and lighting bangers at around 8:00 p.m.. They were responsible for three offenses: Drinking in public is forbidden right now. So is using firecrackers and gathering at those ban zones. Besides, Berliners need valid reasons for leaving their homes. Drinking and lighting pyrotechnical objects are not on the list. Two hours later, Hermannplatz was empty.

While police checked the situation from above, using two helicopters, and on the streets and squares of Berlin, with a total of 2,900 officers, things got louder shortly before midnight. There were far less fireworks and firecrackers than usual, because of a sale ban that had been put in place at the last moment. But, considering nobody was allowed to sell bangers, quite a few Berliners did light those products.

In Neukölln, the noise slowly died down at 12:45 a.m. this morning. Police, ambulance and fire brigade sirens were still heard though. So was a helicopter. But all in all, this was probably the most quiet New Year’s Eve in decades, in most parts of Berlin.

Incidents in the City

Still, the fire brigade was busy. The number of operations was a little more than half, compared to pre-Corona times. Between 7:00 p.m. and 7:00 a.m., fire fighters went out 862 times. They were called to 211 fires and had to send ambulances 556 times. A year ago, there had been a total of 1,523 operations. The police responded to 2,765 emergencies.

On Friday, the Berlin Police Department reported several incidents that took place on New Year’s Eve and in the early morning hours of New Year’s Day. In several firecracker ban zones, some individuals were arrested. Attacks against police officers were reported too. In the Gesundbrunnen neighborhood, policemen in civilian clothes were threatened when they spoke to a man who had used forbidden pyrotechnical products. A mob threw stones and firecrackers at them.

In the same area, in Hobrechtstrasse and in Sonneneallee, unidentified persons attacked police vehicles by throwing bangers and other “objects” at them. The Federal Police arrested several people who had attacked them. In Sanderstrasse, stones and Molotov cocktails were thrown at officers out of a group of 80 persons. The fuel bombs did not ignite.

All in all, 700 arrests were made. In all cases, these persons were let go after their data were registered. Seven police officers were slightly injured. One of them was taken to a hospital.