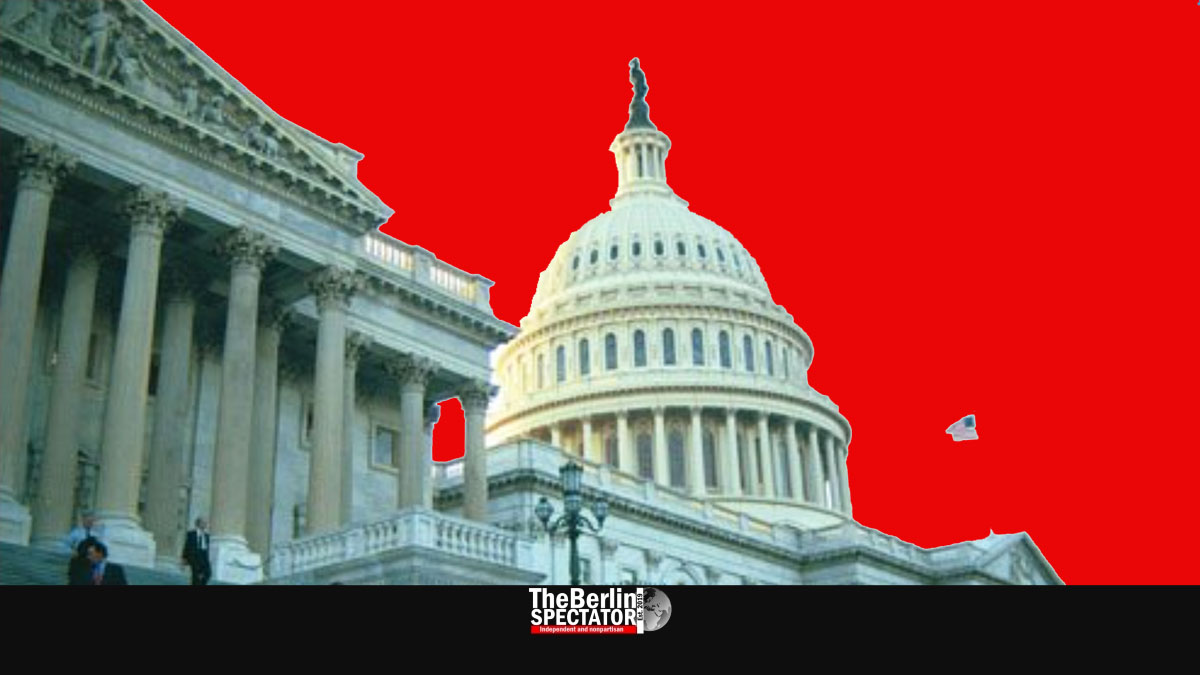 German and other European officials have commented on the attack on the Capitol in Washington D.C. by hundreds of Trump supporters. “Inflammatory words lead to violence”, Foreign Minister Heiko Maas said.

Berlin, January 7th, 2021, update 1:40 p.m. (The Berlin Spectator) — In Germany, government officials, parties and even heads of government in federal states reacted to the events in Washington D.C., where a mob broke through police cordons and entered the Capitol, after President Trump incited them to do so by spreading lies about the election outcome.

On Thursday in the late morning, Germany’s President Frank-Walter Steinmeier said the scenes that had been seen in Washington D.C. were the result of lies, more lies, hatred and incitement. They had been an attack on democracy itself. Steinmeier stated he was sure America was stronger than the hatred. “We want to work with upright democrats”, he said. By that he meant supporters of democracy.

Chancellor Angela Merkel slammed Donald Trump on Thursday. She said the footage from the Capitol had made her angry and sad at the same time. She was sure this was the case with most other friends of the United States of America as well, millions of people who admired America’s democratic tradition. One of the ground rules of democracy was the fact that there were winners and losers after elections, she stated. Democracy itself needed to be a winner in all cases.

Mrs. Merkel said she regretted the fact that President Trump had not conceded his defeat since November. Doubts about the election had been spread. That way the atmosphere that had made last night’s events possible had been created. But statements she had heard from people in both parties made her confident that the American democracy was stronger than the rioters. Angela Merkel has not criticized Trump this harshly before. Until today, she usually did so indirectly, between the lines.

In Berlin, Germany’s Foreign Minister Heiko Maas condemned the attack on the Capitol by saying the enemies of democracy would be happy about the unbelievable footage from Washington. Inflammatory words led to acts of violence. This had applied at the Reichstag, and now at the Capitol. Maas was referring to similar events in Berlin that took place in late August, when a mob consisting of right-wing extremists tried to enter the Reichstag which accommodates the Berlin Bundestag.

He also said the disdain of democratic institutions had devastating repercussions. Trump and his supporters needed to accept the decision America’s voters had taken and stop treating democracy with contempt, Heiko Maas stated.

Vice Chancellor and Finance Minister Olaf Scholz commented by saying the video footage from the Capitol was disturbing. This was an intolerable attack on democracy. Scholz said President Trump had divided America. Now it had become obvious how deep the divide was. The difficult task to bring America together again was up to Joe Biden.

In neighboring Austria, Chancellor Sebastian Kurz published a Tweet in English: “Shocked by the scenes in Washington, D.C. This is an unacceptable assault on democracy. A peaceful and orderly transfer of power must be ensured.” The President of the European Council, Charles Michel, said the U.S. Congress was a temple of democracy. Witnessing the scenes in Washington D.C. had been “a shock.” Michael stated the European Council trusted the U.S. would ensure a peaceful transfer of power to Joe Biden.

Dominic Raab, the British Secretary of State for Foreign Affairs had this to say: “The US rightly takes great pride in its democracy, and there can be no justification for these violent attempts to frustrate the lawful and proper transition of power”, while Emmanuel Macron, the President of France, said “We believe in democracy.”

Back in Germany, Chancellor Angela Merkel’s conservative party CDU officially reacted to the coup attempt in the United States with a statement. The video footage from Washington D.C. was appalling. These events need to be a reminder that “our democracy” had to be defended against hatred, violence and division.

Even Armin Laschet, the First Minister of North Rhine-Westphalia, reacted to the antidemocratic attack on the Capitol. He said the Congress of the United States of America had been the symbol of freedom and democracy for centuries. The attacks by fanatic Trump supporters hurt all friends of the U.S.. Whoever spread populism and polarization verbally would reap hatred and violence.

After the attack on the Capitol, Germany updated its travel warnings for the United States of America. It mentions yesterday’s events, the dead, the injured, the arrests and the curfews for Washington D.C., Arlington and Alexandria (Virginia). For now, the situation had calmed down, the Foreign Ministry’s warning read, but a continuation of the protest and the use of firearms could not be ruled out.