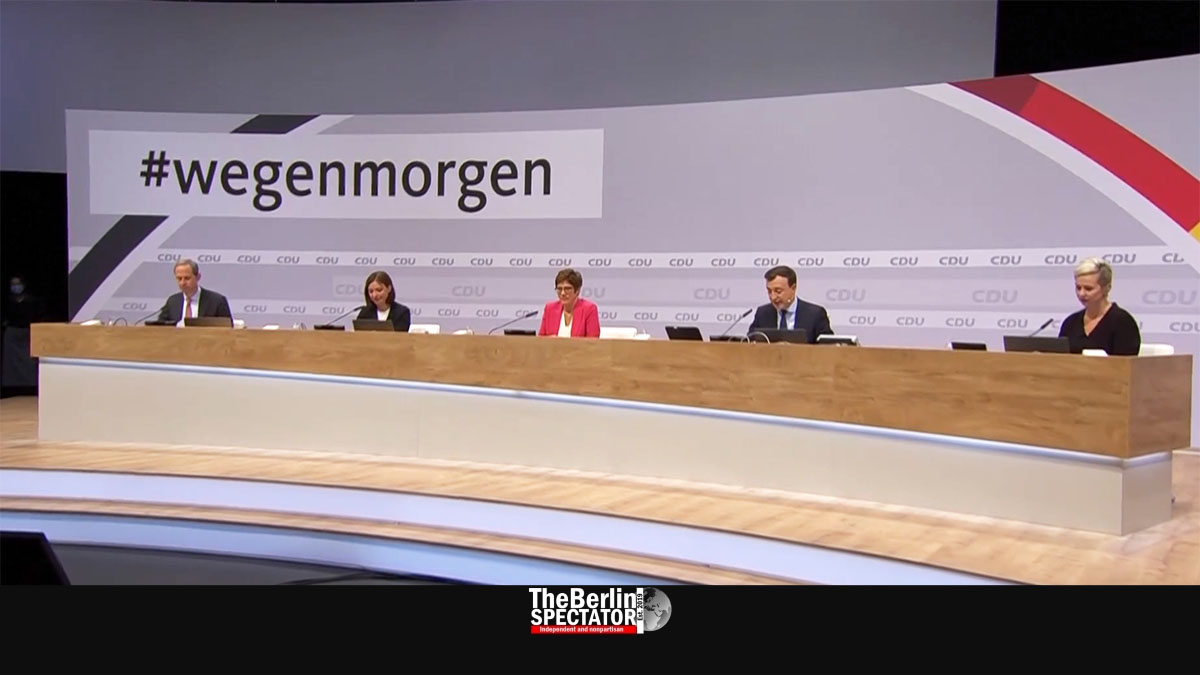 On Friday night, Angela Merkel’s conservative CDU started its first digital party convention. Only a few officials were present in Berlin, while 1,001 delegates watched the whole thing from home.

Berlin, January 16th, 2021 (The Berlin Spectator) — On Friday, not even the three candidates for the Christian-Democratic Union’s chairmanship were on site, at a large hall at Berlin’s fairgrounds. Because of Corona, they had to watch the first part of their own party convention on a screen, along with the delegates.

Annegret Kramp-Karrenbauer, also known as AKK, who was the CDU’s chairwoman for the past two years, held her last speech in that role on Friday. She revisited the past, by saying the kind of big argument the CDU had had with its Bavarian sister party CSU two years ago should never be repeated. The party needed to remain what it had been all along, namely Germany’s strong political center.

According to AKK, the CDU is a party that does not only talk, but acts as well. She said it would run good campaigns, and was therefore ready for this “super election year” in Germany. As many as six state elections will take place in 2021, along with federal elections for the Berlin Bundestag in September.

She said Germany needed the CDU’s policies and that it was important to communicate them clearly. According to Annegret Kramp-Karrenbauer, the Corona pandemic also provides the chance to improve the cooperation and to work on improving the protection of both children and elderly citizens, a necessity the country had learned about during the ongoing Corona crisis.

There was something else she told her party on the day she left its chair: Germany needed an active, strategic European policy as well as a responsible role in foreign and security policy.

AKK ended her speech with some personal remarks. She said she knew some colleagues within the CDU had expected more from her, but that she was also thankful for her time at the Konrad Adenauer Haus in Berlin, the CDU’s headquarters. Mrs. Kramp-Karrenbauer asked all party members to support the new chairperson and his efforts to build a new and modern CDU.

At the party convention, Friday was farewell day. Another CDU member who will leave her position this year spoke to the delegates. Her name is Angela Merkel. She said this was her 14th party convention as Chancellor. A lot had changed since 2005, the year she became head of government. Back then, the smart phone had not been invented, but there had been 5 million jobless people in Germany.

Mrs. Merkel mentioned all the crises Germany went through during her 15-year term. Now the country lived through the crisis of the century, she stated, namely Corona. It was a crisis that restricted people’s freedom and hurt the economy. All in all, the past 15 years had been difficult and challenging, the Chancellor explained.

“The CDU is always ready to take responsibility”, Angela Merkel said, “no matter what kind of challenge is on the agenda.” Then she said a sentence that seemed to contain worries or doubts about her successors: “I hope the team that will be elected will find the right answers.” One thing is certain: Angela Merkel is aware of the fact that the CDU will change once she leaves later this year. So is the party leadership.

From Three to Four

Today, the new chairman will be elected, but the result might not be known until Friday. There are three candidates. Or maybe four. Markus Söder, chairman of the CDU’s Bavarian sister party CSU and First Minister of that same federal state, thanked the CDU for the excellent cooperation. The thing about him is that he may want to become Chancellor himself, and there are quite a few CDU members who would support his candidacy.