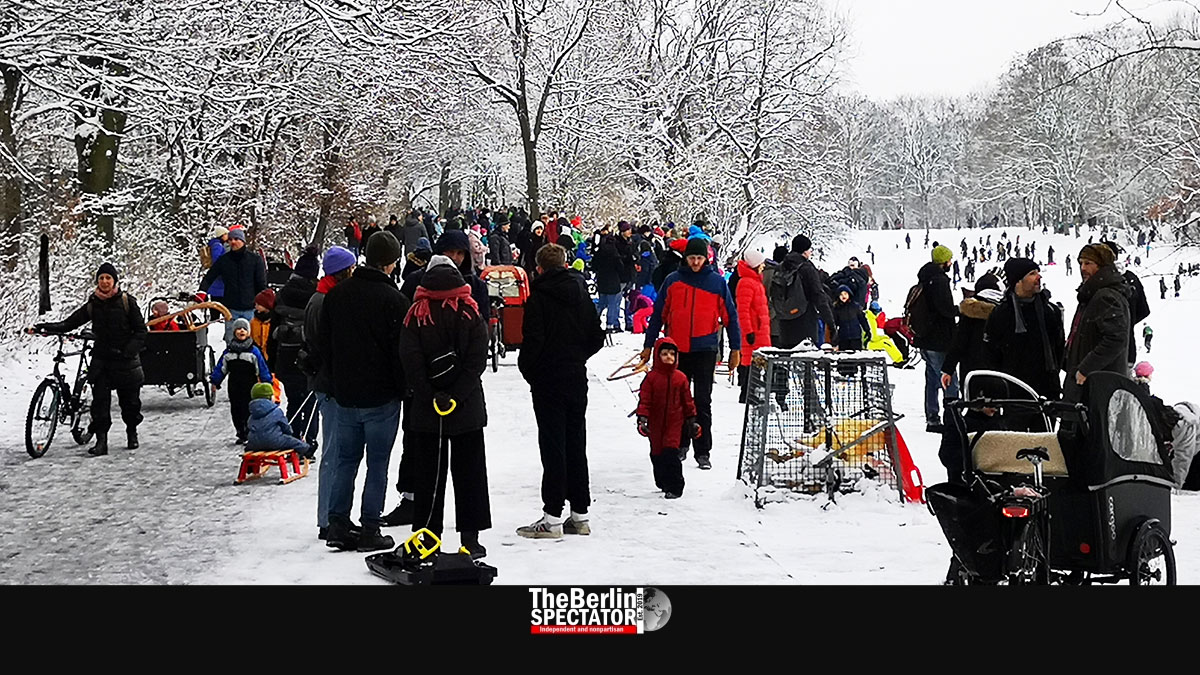 In Berlin, almost 3.8 million inhabitants noticed a white layer when they got up on Saturday morning. At ‘Hasenheide’ park, far too many people gathered without masks or distance.

Berlin, January 30th, 2021. Update: January 31st, 2021, 8:40 p.m. (The Berlin Spectator) — At 2 degrees Centigrade (36 degrees Fahrenheit), walks or bicycle rides in the snow were enjoyable in Berlin on Saturday. For the second time this year, snowfall had covered the German capital overnight. In the early morning hours, thawing salt was spread all over the place.

Because roads in neighboring Brandenburg and streets in Berlin turned into slides last night, accidents were reported. Luckily, most of them were fender-benders nobody got injured in. According to forecasters, things could turn more dangerous starting on Saturday night, when temperatures are supposed to plummet substantially. Snowmelt will freeze and likely create a mess.

Berlin’s Kreuzberg and Neukölln boroughs were mostly quiet on Saturday, because of the lockdown and increasing fears of mutated Corona variants which reached the city in the past days. At ‘Hasenheide’ park, the picture was very different. Hundreds of families with children and dogs populated the recreation ground. The most popular activity was racing down the park’s modest hills on sleighs.

The children, hundreds of them, definitely enjoyed sledding, but the obvious problem was largely ignored. While the little ones were busy, their parents gathered and talked. Hardly anyone was wearing masks. In countless cases, the required distance was not kept either. At some point, two police officers arrived, but did not take any action.

They might have thought the situation was not alarming enough to do something about it, or they came to the conclusion that there was no way of stopping it. Or maybe they intended to react later.

Other families built snowmen on the park’s huge pastures. An impressive snowwoman made by two girls would have won an award if there had been any. Just a few steps away, local drug dealers offered all kinds of forbidden substances to passers-by, as they do 365 days per year, no matter what the weather is like.

In the next few days, daytime temperatures in Berlin are supposed to vary between 0 and 2 degrees C (32 to 36 degrees F). For the next two nights, -6 to -8 degrees C (18 to 21 degrees F) were forecast. It is supposed to snow more on Tuesday. On Wednesday, the snow might melt in rising temperatures.

Germany: Government and Manufacturers to Discuss Issues at ‘Vaccine Summit’