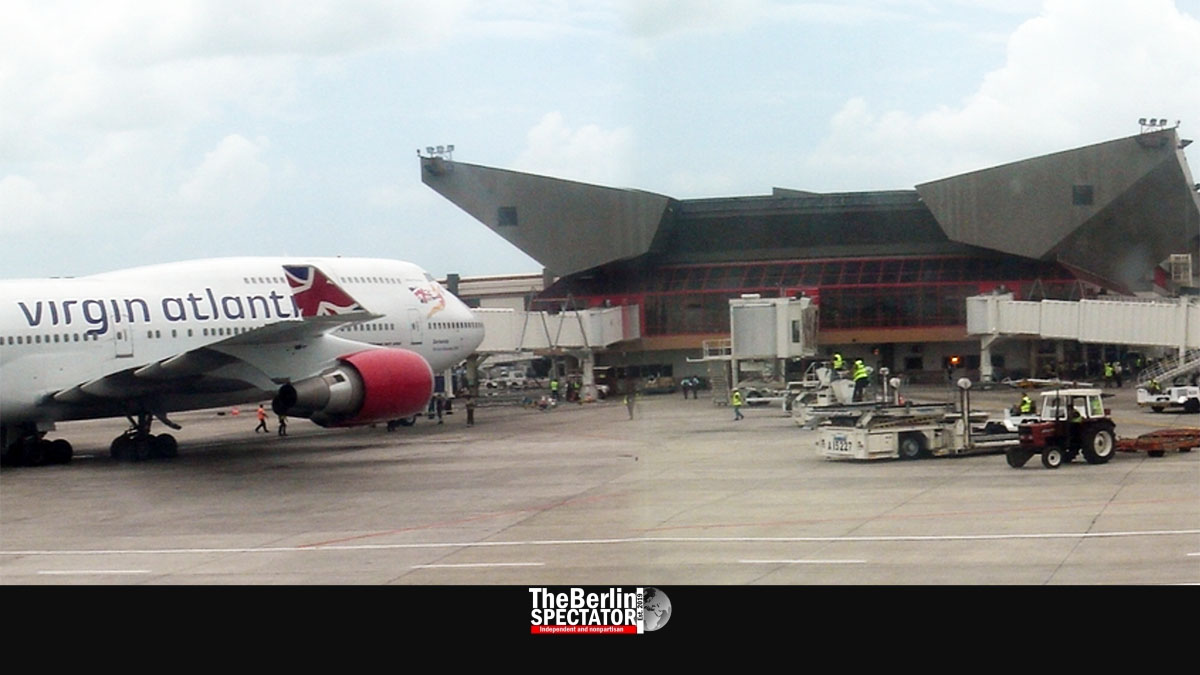 In this world, there are airports which deserve to be called that way, and others that look like tool sheds. There are airports that should be avoided at all cost, and those that make people want to move in.

Berlin, October 5th, 2020. Update: February 17th, 2021 (The Berlin Spectator) — Havana is a beauty. There is nothing better than taking a stroll along the Malecón. It is great to be there when a storm blows part of the Straits of Florida right onto the street and into your face. Cuba will hopefully be free soon. But let’s turn our attention to its main airport.

José Martí Airport sucked when I was there some 40 years ago. It most likely sucked ever since, and still does. First of all, a design would have been nice. Secondly, aerodrome is a far more fitting vocable for this one because of its size. Looking at the photo at the top of this page, it is safe to say that if José Martí Airport was that Boeing 747-400’s nest, the bird would be in trouble. Obviously, it would not fit into its own home.

Another one of this kind? Augusto C. Sandino International Airport was pretty bad in 1979, when the late Ernesto Cardenal almost knocked me down as he came running around a corner. That place looked like a roofed vegetable market until it was modernized much later. Its exotic location, Managua, made it sort of sexy though.

At that time, Benito Juárez Airport in Mexico City had the charm of a barber shop, with its brown paving tiles and worn out leather seats. The immigration officials stood behind ugly plastic counters in dark green. By now, it seems to have turned into a far more attractive airport. ¡Felicidades!

In 2002, Dulles Airport in Virginia still looked the way it had in 1975, when the second ‘Airport’ movie with Charlton Heston was shot there. Its timeless style hefted it into the ‘sexy’ category easily though. But how about John F. Kennedy Airport? Living in its approach path in 1999 was not really a good idea. Those big birds came in every 90 seconds. We could almost scratch their bellies.

It was almost like living at that beach in St. Maarten, where the engines of KLM’s Boeing 747s cause sandstorms every time they take off for Schiphol, because that beach is located right on the runway — or vice versa. Anyway: Conversations behind JFK Airport were not really possible because of the horrific noise. But the kosher pineapple chicken they offered in Cedarhurst was excellent.

At least JFK had a ‘European terminal’ that was easy to locate, and it was a lot closer than Newark. Hey, it was a lasting experience to land at Montréal Airport while listening to Gino Vannelli sing his song about that very same city through those old-fashioned Boeing headphones in 1980. But do wear a thick fur coat when you get there.

The Size of Wisconsin

On the old continent, Sofia had the most terrible airport of all time before the new Terminal 2 was erected. It was tiny and ugly, the information spread by those staffers at the information desk was always wrong and everyone was unfriendly as hell. The latter has not changed. Neither has the chaos. But Terminal 2 is sort of sexy.

Charles de Gaulle Airport is a beauty. It may be the size of Wisconsin, but things do work well. In the land of cuckoo clocks and Bratwurst, Munich’s Franz Josef Strauss Airport is too far from the city. You need an aircraft to get there in the first place. And they should have called it after somebody else.

Hamburg Airport looked like a fries stand until it got new terminals in 1993 and 2005. Now it deserves to be called sexy. The same applies to Bremen Airport which is located right in the city. Oh, I almost forgot Frankfurt. Guys, if you feel like walking for a month, from one gate to the next, Frankfurt Airport is yours.

Before this Pulitzer Prize-worthy piece ends, it is time to mention Berlin. On October 31st, 2020, the super sexy new BER Airport was opened. The inauguration party was cancelled because of the airport’s embarrassing nine-year delay, but its beauty cannot be denied, especially on the inside.

And the sexiest airport on Earth is ….. Honestly: I do not know. I have never been to the Far East, Africa, Australia or further south than Managua, Valencia, Athens or Eilat. From the airports I know, I would go for BER. Yes, being a little patriotic can’t hurt, right? Over and out.

Flensburg Attempts to Slow Down Spread of New Corona Variant