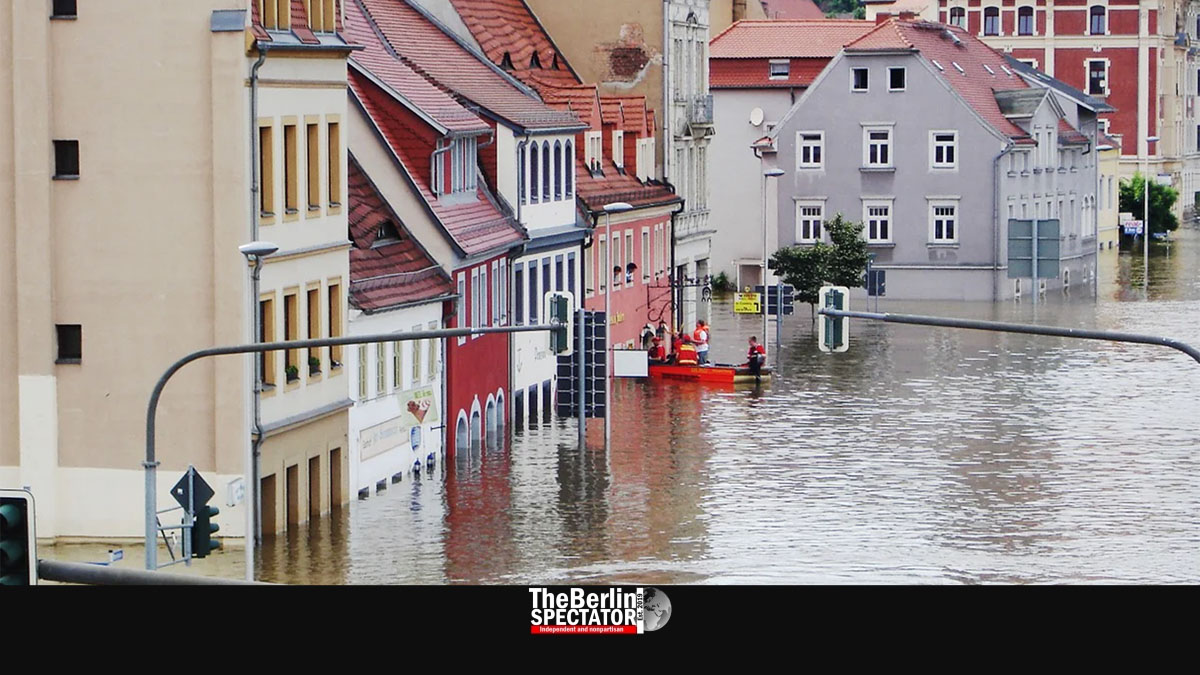 According to the authorities in two federal states in western Germany, at least 58 people died in the worst floods in decades. In North Rhine-Westphalia and Rhineland-Palatinate, many residents were still missing on Thursday night. Angela Merkel commented on the catastrophe during a trip to the U.S..

Update: July 16th, 2021, 12:42 p.m. (The Berlin Spectator) — In North Rhine-Westphalia, Germany’s largest federal state, the death toll stood at 30 on at 6:00 p.m. on Thursday, according to the Interior Ministry in Düsseldorf. As many as 57 people were injured when their cities, towns and villages were flooded all of a sudden. In neighboring Rhineland-Palatinate, the situation was terrible as well. In Bad Neuenahr-Ahrweiler, one of the flooded towns, Interior Minister Roger Lewentz stated at least 19 persons had lost their lives in his state. Later, more victims were added. Their official number in both states combined exceeded 100 on Friday afternoon.

There was another shocking number. In Bad Neuenahr-Ahrweiler county, the authorities said a total of 1,300 residents were missing. Since the cell phone network collapsed because of the extreme weather, there was hope that many of them could be reached once it had been repaired, a spokeslady said. A disaster situation was declared in this county. The Ministry of Defense in Berlin put the Bundeswehr under a disaster alert. That way, soldiers can help more effectively with complicated bureaucratic procedures.

At the same time, thousands of residents in the areas affected by the floods were saved. Helicopters were sent to save people from roofs in places where the streets turned into rivers. Lewentz said the victims had been surprised in their sleep last night. Many houses were destroyed or damaged by the floods. Video footage showed scenes which looked like a tsunami had struck. Small houses were literally ripped apart by the water, trucks and cars were swept away. Minister Lewentz stated it was too early for final numbers. The authorities were concentrating on saving lives right now.

Malu Dreyer, the First Minister of Rhineland-Palatinate, said she was hoping the missing persons had escaped the floods. But the worst case scenario could not be ruled out. Her colleague in North Rhine-Westphalia, Armin Laschet, went to Hagen on Thursday, one of the cities affected most. He said an even bigger catastrophe had been prevented from happening because the authorities on site had been prepared for the extreme weather. Soldiers sent by the Bundeswehr, Germany’s armed forces, had helped a lot. In regard to the victims, there were no final numbers yet, Laschet said.

Because of the catastrophic floods, Finance Minister and Vice Chancellor Olaf Scholz interrupted his vacation and flew to Rhineland-Palatinate in order to inspect the damage. He said the people in the affected areas were in distress which was why the state was forced to act. Scholz promised he would do everything to make sure there would be financial aid.

According to experts, a weather system that brought torrential rains to western Germany could not move away because it was blocked by other weather systems. The rain kept on falling in extremely high quantities until the soil could not take more. This is how the floods developed so quickly. Several German politicians blamed global warming for weather phenomena of this kind.

Angela Merkel was in Washington D.C. on Thursday, on her first U.S. trip in years, and most likely the last one during her term. She was scheduled to meet President Joe Biden and Vice President Kamala Harris. The Chancellor reacted to the events back home by saying she was “shocked about the catastrophe”. For the residents in the affected areas, these were terrible days, Mrs. Merkel said. Her thoughts were with them. She also thanked all emergency crews on site.

Germany: At least 42 Dead in Flooding Caused by Severe Weather