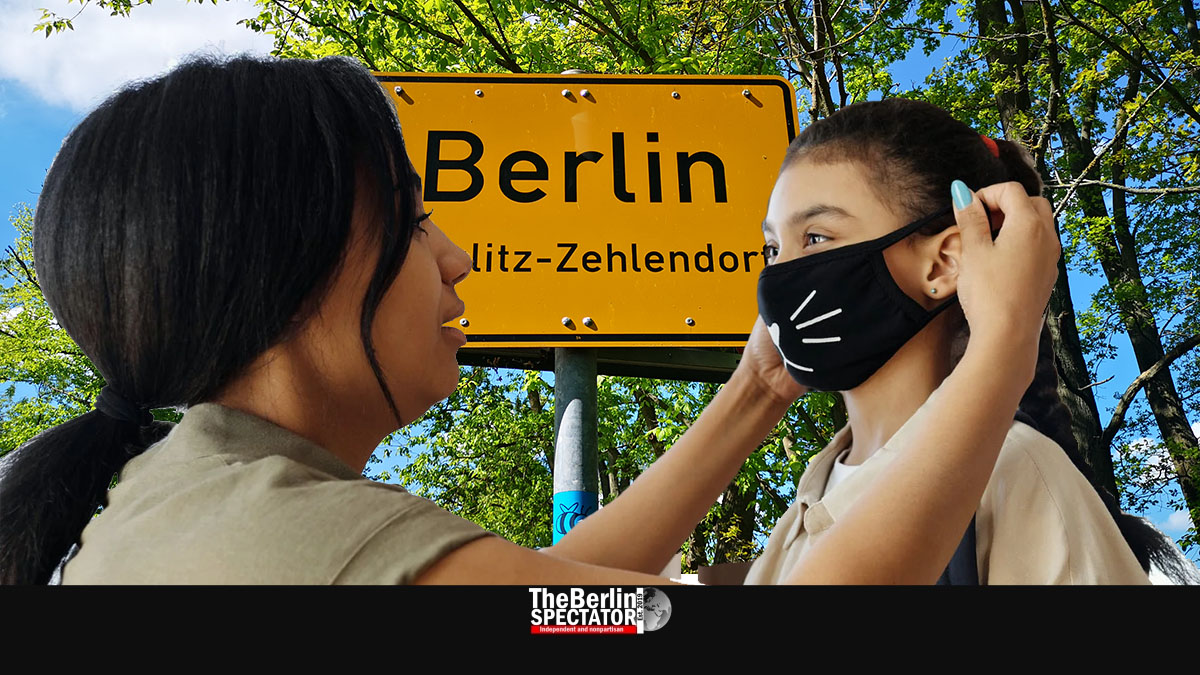 Just like neighboring Brandenburg province, the city state of Berlin will make all schoolkids wear masks when the summer vacations end in a week from now. There will be a lot of testing as well.

Berlin, July 31st, 2021 (The Berlin Spectator) — It is back to school in Berlin. The city will definitely fill up again in the coming days. Returning vacationers will bring home all of those memories from the beach, but also the Coronavirus. At least this is what the Berlin Senate is afraid of. That is why its policy for the German capital’s 827 schools is rather strict.

A Million Tests per Week

The good news is that all schoolchildren will be taught in class, meaning the time of online classes is over, as long as things do not get worse again. The city has 330,000 pupils. All of them, from 1st to 12th grade, are supposed to wear masks in class during the first three weeks. Education Senator Sandra Scheeres said, this rule could be prolonged, depending on the overall Corona situation.

Initially, Berlin had intended to have all schoolchildren tested for Corona during the first week of school. Now, the Senate announced all pupils would have to get tested three times a week for three weeks. This means there will be a million tests per week at schools alone. This is how Berlin wants to track down returning vacationers who brought Corona into the country and the city.

Earlier this week, Brandenburg had announced similar rules for its schools. In the province, all pupils have to wear masks for two weeks. From 7th to 12th grade, the mandatory mask rule will remain in place longer. All schoolkids need to get tested twice a week. Other federal states in Germany have similar plans. In some, the summer vacations have only just begun. In fact, this is the only weekend on which all of Germany is on summer holiday, with bad implications for the traffic on the Autobahn. Schleswig-Holstein and Mecklenburg-Hither Pomerania are ending their summer holidays tomorrow.

In Berlin, where the Police Department just forbade several protests registered by Corona deniers this weekend, the Seven Day Incidence decreased a little, from 27.6 on Friday to 26.8 today. With Hamburg (30.5) and North Rhine-Westphalia (22.5), Berlin is among the three federal states with the highest Incidences. Three out of 412 counties in Germany, Berchtesgadener Land (Bavaria), Wolfsburg and Lüneburg (both in Lower Saxony) have Incidences higher than 50.

Tomorrow, Germany’s rules for entering travelers will be tightened. From now on, all persons from 12 years of age who cross the border into the Federal Republic require Corona PCR tests, no matter whether they come in from countries not classified as risky, from “Risk Areas”, “High Incidence Areas” or “Virus Variant Areas”, and no matter what means of transport they use. Individuals who are fully vaccinated, and those who had COVID-19 up to six months ago, are exempt.