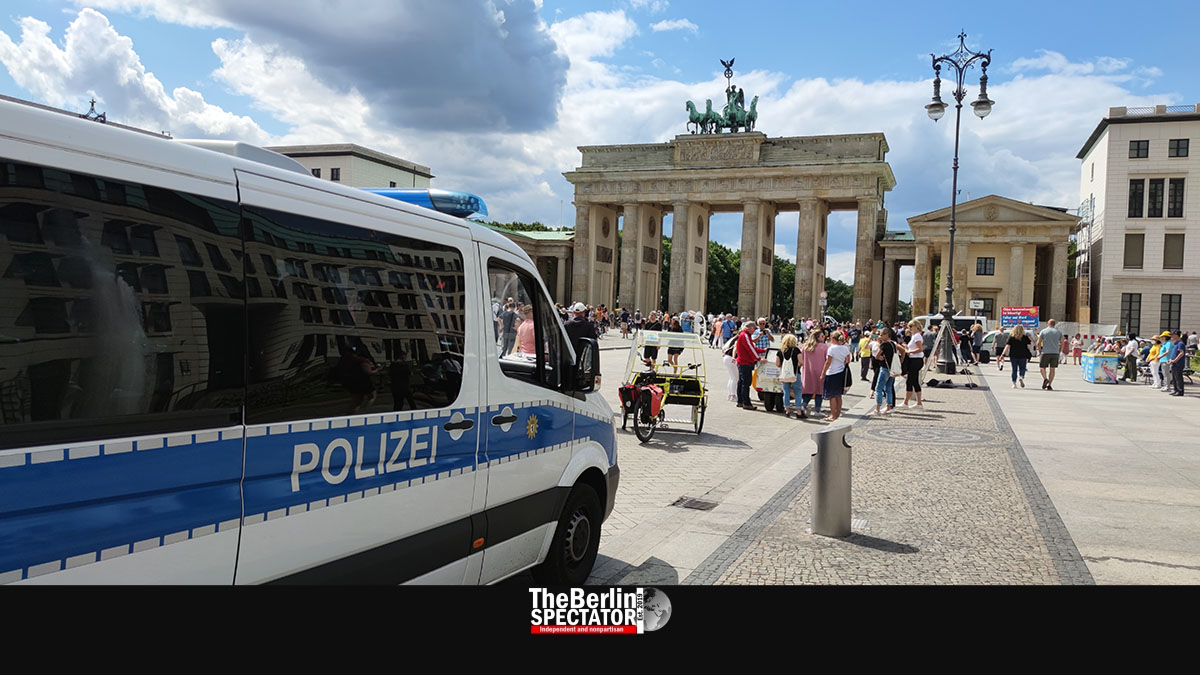 Hundreds of police officers are observing the situation in Berlin’s government quarter this weekend. They are ready to step in at a moment’s notice, in case conspiracy theorists try to stage forbidden protests.

Berlin, August 1st, 2021 (The Berlin Spectator) — In the heart of Berlin, several police vans were parked around Brandenburg Gate on Saturday. The officers in those vehicles had one mission, which was to make sure conspiracy theorists would not start rallies against the government’s Corona policies. Ahead of this weekend, the Berlin authorities had banned as many as twelve of those protests. An additional one was prohibited on Friday.

Even more officers protected the Reichstag building, which accommodates the Berlin Bundestag, and the Chancellery. There were enough policemen and policewomen to stop any rally. Enforcement could have been there within minutes. The Berlin Police Department’s operational command vehicle was seen in the area as well. On Friday, dozens of Corona deniers had assembled at Brandenburg Gate, before they were sent away by officers.

Because more and more tourists are coming to Berlin these days, the squares on both sides of Brandenburg Gate were crowded on Saturday afternoon. Countless visitors were taking photos of each other in front of the city’s most important sightseeing spot. A small protest staged by communists did take place. They demanded “peace with Russia” and support for Cuba and Venezuela. But Corona deniers were not in sight.

Of course, the police took action elsewhere as well. Tour buses full of conspiracy theorists that were approaching Berlin were stopped and turned back. Berlin’s usual entry points are being observed too. While freedom of assembly and the right to protest are generally being upheld in Germany, and especially in Berlin, where 5,000 rallies take place per year, this is different. The “Querdenken” movement of Cortona deniers is being observed by the Federal Office for the Protection of the Constitution because of suspected anti-democratic tendencies.

The immediate problem with the protests these conspiracy theorists stage is the fact that they usually refuse to the follow Corona rules which they generally reject. They will not wear masks or keep their distance. In times like these, this kind of behavior is simply too dangerous. That is why Berlin’s Higher Administrative Court ruled against petitions handed in by the organizers and confirmed the bans of these protests. The largest one of them was supposed to take place on Sunday. Michael Ballweg, the leader of the “Querdenken” movement, had registered it for 22,500 participants.

Threat to Life and Health

According to the Higher Administrative Court, the protests in question would have “threatened the lives and health of people” if the participants had ignored the mask and distancing rules. This is what they usually do. Today, some 2,000 police officers are supposed to enforce the ban.