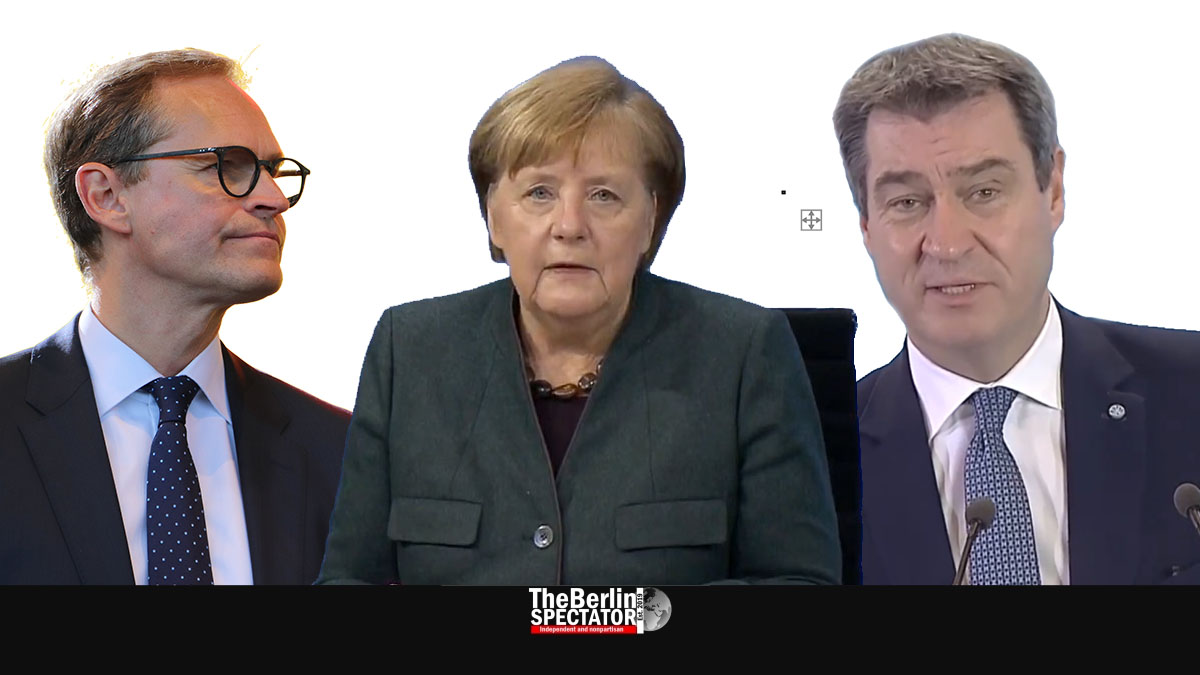 Starting in October, Germany will not pay for all rapid Corona tests anymore. That way, unvaccinated people are supposed to be pressured into getting immunized. After today’s Corona conference, Angela Merkel said vaccinations needed to be promoted.

Grossgmain/Austria, August 10th, 2021 (The Berlin Spectator) — After today’s Corona conference, Angela Merkel, Berlin’s Governing Mayor Michael Müller and Bavaria’s First Minister Markus Söder sat down in front of cameras and microphones in Berlin. It was Müller who delivered the best summary of the day: “Vaccinate, vaccinate, vaccinate!” All participants agreed Germany’s vaccination campaign is stalling and needs to be sped up.

Angela Merkel explained, Germany was not the fastest European country in regard to vaccinations anymore. This needs to change, the Chancellor and the First Ministers believe. So far, 55.1 percent of all Germans have been fully vaccinated. This result is not satisfactory, also because a herd immunity cannot be reached before 85 percent are immunized.

A decision Mrs. Merkel and her colleagues from the federal states took might make vaccinations more attractive. As expected, Germany will stop paying for rapid Corona tests. From October 11th, 2021, people will have to pay for tests themselves. The tests are required to enter restaurants, cultural venues and other establishments in all of Germany, starting on August 23rd. What this means is that unvaccinated persons will either have to pay to take part in public life or get immunized. Angela Merkel justified the step by saying all Germans had gotten vaccination offers.

Michael Müller said, persons who had refrained from accepting the Corona vaccination offer they had gotten could not expect society to pay for their tests. According to him, the group of unvaccinated people in Germany is “far too large”. Müller also said the infection numbers among Germans aged 15 to 25 were rising. In this group, the Incidence stood at 100 right now. Immunizations were “badly needed”.

Individuals who cannot be vaccinated against Corona, including pregnant women, are exempt, meaning the state will continue paying for their Corona tests. The same applies to children, because Germany’s Permanent Vaccination Commission has not approved any vaccine for them. According to a statement released after the Corona conference, the free rapid Corona tests helped break the third Corona wave in Germany.

The participants of today’s talks in Berlin also asked the Bundestag to extend the epidemic crisis it declared beyond September 11th, 2021. That way, uniform anti-Corona rules can be put in place again if necessary. During the third wave, counties with high Incidence levels had been forced to take certain steps in order to get their infection numbers down.

Masks would still have to be worn and people would need to keep their distance in retail businesses and public transport, Angela Merkel stressed. This had to do with the danger the Delta variant of the Coronavirus posed, she explained.

On top of it all, Angela Merkel and the First Ministers decided to allow sports events with audiences of up to 25,000 people under certain conditions and to extend the Corona aid program for companies in need until the end of the year.