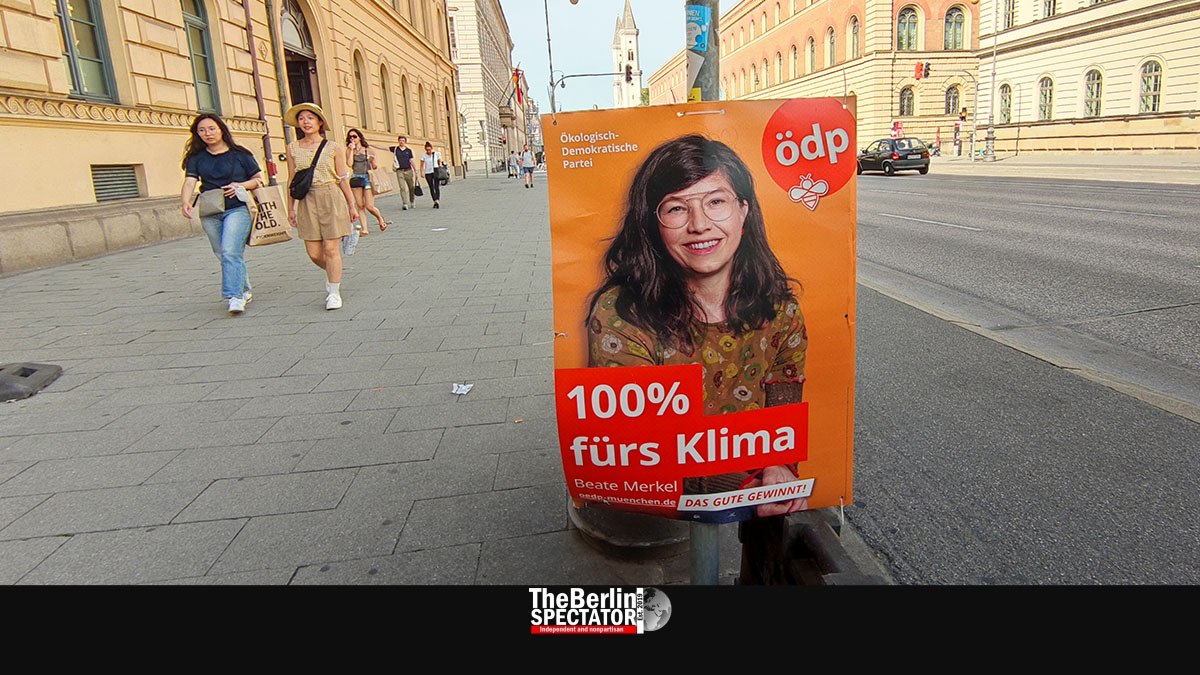 In Germany, countless parties have started their election campaigns and the usual war of posters. All of the latter transport messages, but not all of them do so directly. There are very different approaches.

Berlin, August 19th, 2021 (The Berlin Spectator) — Germany’s big elections are 38 days away. For that reason, the candidates for the Berlin Bundestag and some state parliaments have rather full schedules. Their parties have begun plastering the entire country with mostly neat election campaign posters.

Election campaign posters can be found at picturesque Bavarian lakes, in partially chaotic cities, including at least one that starts with the letter ‘B’, on boulevards, tiny streets, on highways, buildings and lamp posts. Piled up, all of those posters combined would probably reach Jupiter.

There are different approaches. Some posters are selling a person, meaning a candidate, others an approach or an ideology. There are many ways to draw interest. Good portrait shots, appropriate colors, catchy slogans, promising announcements and the usual party logos are important aspects. In some cases, the messages the posters convey are rather direct and simple, in others they are more subtle.

Sometimes, the art form is to leave away the elephant in the room. For instance, Armin Laschet, the conservative candidate for Chancellor the “union parties” CDU and CSU are building on, is not exactly popular. He has not appeared on too many posters yet. In Olaf Scholz’ case, it is the other way around. He is quite popular, as the latest polls have shown. His problem is his party, the SPD. That is why the Social Democrats are mainly selling him on their posters.

Bavaria is a very conservative federal state, but the capital of Munich is a bit more progressive. Here, the Social Democrat (SPD) Claudia Tausend is running for the Bundestag for the third time. Since 2013, she has been an MP for the precinct ‘Munich East’. Now she intends to prolong her time in Berlin. Mrs. Tausend’s election campaign posters contain her picture, her name and a policy message hardly anyone will read because it was printed in tiny letters. This is about selling a person people in Munich know.

The Greens are in a difficult position now. At one point earlier this year, they were the strongest party in Germany. Then, they were overtaken again by CDU and CSU. Now, its former senior partner in the “red-green coalition” which ruled from 1998 to 2005, the SPD, overtook them, also because they made some mistakes. Some of their election campaign posters are unconventional, to say the least.

One thing is certain: The Greens are promising a whole lot. On one of their posters, below a green photo of their main candidate Annalena Baerbock, it says “Economy and climate without crisis”. Seriously? This seems to be saying that, if elected, the Greens would prevent any crisis from hitting Germany. This is a rather bold statement. The slogan may have been created after midnight, when everyone at the agency was a little tipsy and therefore more creative.

The “usual suspects”, big parties that are already part of the Berlin Bundestag, are distributing tons of posters, but so are smaller parties some of which are rather exotic. The pro-European Volt movement chose a design with an unconventional color combination nobody will be able to overlook, while the far-left put up election campaign posters with bright red letters. The extremist right, including the AfD, is in the election campaign poster business too.

Election posters themselves are an art form, but so is placing them at the right spots. The AfD’s poster ads are being torn down a lot, which is why these right-wing radicals mainly concentrate on eastern Germany, the eastern part of Berlin and other places around which they are hoping for voters. Also, they fix those posters to lamp posts at very high levels in order to make sure nobody can reach them.

More posters with motives of all kinds, including faces, will appear before Super Sunday, September 26th. This is mainly about reaching voters who have not decided which party they will go for.

Germany Registers Highest Number of New Corona Infections Since May