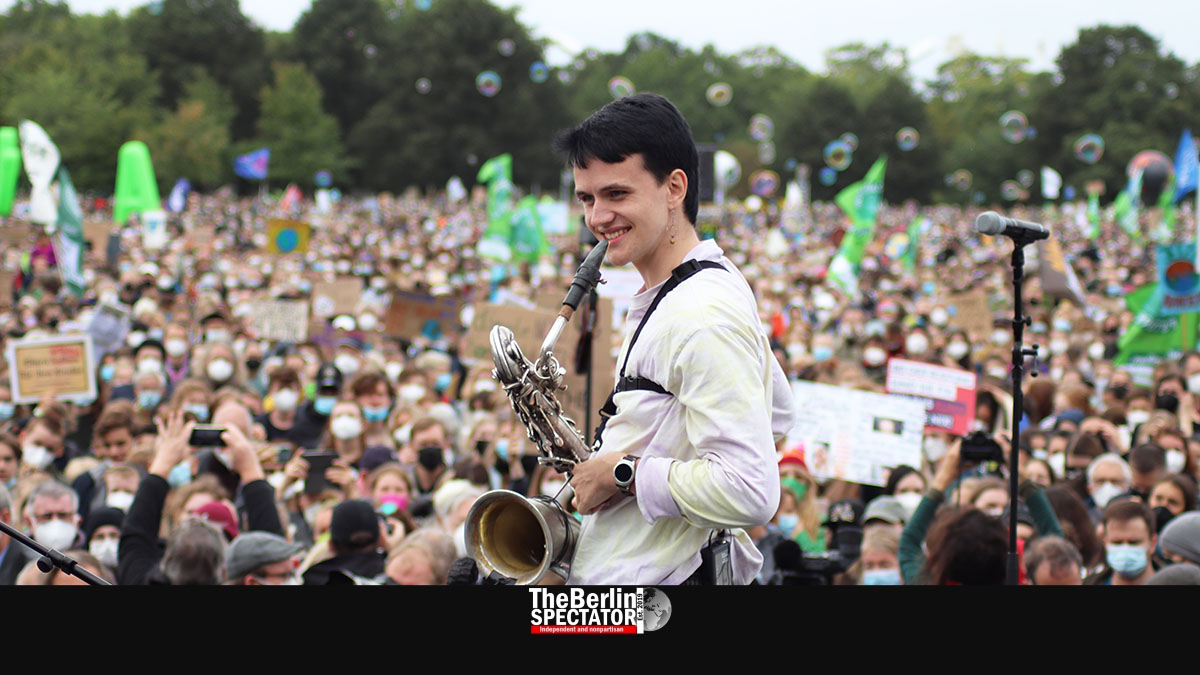 Ahead of Germany’s elections for the Bundestag, which take place on Sunday, Fridays for Future staged a giant protest in Berlin. The participants could not really keep their distance since there were far too many people.

Berlin, September 24th, 2021. Update: September 25th, 2021, 07:59 a.m. CEDT (The Berlin Spectator) — In front of the Reichstag in Berlin, tens of thousands of school kids and other protesters assembled to demand a more radical climate policy from the next federal government. The organizers said there had been 100,000 participants. Republic Square in front of the Reichstag building, which houses the Bundestag, was absolutely crammed. On a giant stage set up there, teenaged speakers kept on saying how “cool” it was that so many people had come.

“We need to get rid of coal energy a lot earlier than 2030”, a young man demanded, before the crowd chanted “Stop coal! Stop coal!”. Greta Thunberg, a young lady from Sweden who initiated the Fridays for Future movement, spoke to the crowds as well. Thousands of protesters carried signs that said “Save the planet!”, “Act now!”, “Now or never!” and “How dare you?”, a quote used by Greta Thunberg at the United Nations in New York two years ago. Some signs contained the ‘F word’, in German. “F… yourself, but not the planet”, one of them read.

The participants included many adults as well. Teachers, parents, grandparents and members of many organizations came to the rally. One of them was ‘Omas gegen Rechts’ (“Grandmothers Against Right-Wing Extremism’). Many school children who joined the protest should have been at school in the morning. Instead, they took part in “feeder protest marches” that moved towards Republic Square.

In the early afternoon, when the square was already crowded, more and more protesters arrived. Through loudspeakers mounted in a vehicle, the police said the location was officially full. Nobody else was allowed to go to the square for that reason. Nobody listened. The organizers reminded everyone to keep their distance, but it was not really possible because of the size of the crowd.

Another popular chant was “Up to 1.5 degrees!”. According to the 2015 Paris Climate Accord, the signatories intend to do everything in their power to make sure the global warming does not increase the average temperature on Earth by more than 1.5 degrees Centigrade. Experts believe the increase could be a lot higher, with horrific consequences, unless radical steps are taken in the fight against climate change.

After a March through parts of Berlin’s city center, Greta Thunberg’s speech, was scheduled to be held. Berlin is only one of hundreds of locations in Germany at which ‘Climate Strike’ protests took place on Friday.