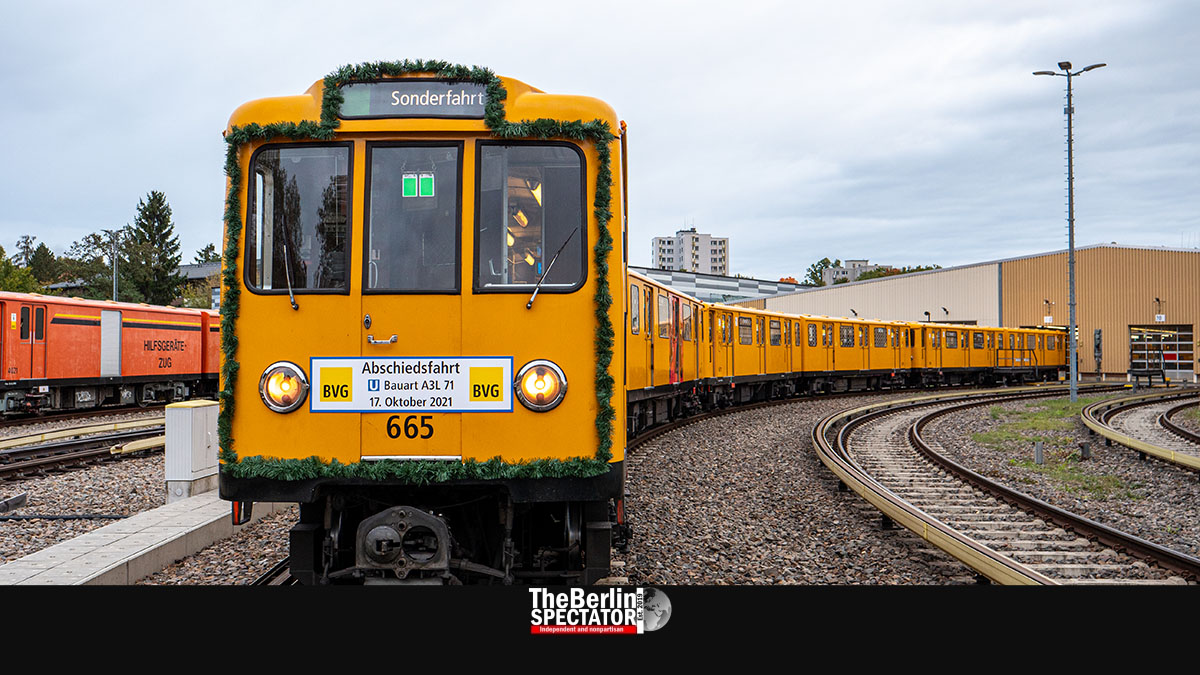 Berlin’s oldest narrow-gauge subway trains are being taken off the tracks. In the past 50 years, they covered millions of miles. This is the end of an era.

Berlin, October 17th, 2021 (The Berlin Spectator) — Most large cities in Germany have ‘U-Bahn’ trains or ‘Untergrundbahnen’. The latter is one of those typical long German words. It obviously stands for “‘underground trains’. Berlin features the largest ‘U-Bahn’ network in Germany. It includes 175 stations and exactly 155.4 kilometers (96.5 miles) of tracks. Nobody wants to know how many rats live down there in Berlin’s subsoil areas, but everyone is interested in the number of passengers those ‘U-Bahnen’ (plural form) carry. Let’s get this one out of the way: In 2018, Berlin’s underground, metro, subway or ‘U-Bahn’ passengers took 583 million rides. Not bad. In Corona times, the number of passengers and rides temporarily decreased.

Moving many passengers on many rides requires many ‘U-Bahn’ vehicles. Berlin’s main public transport provider BVG, which runs the entire ‘U-Bahn’ network, has 1,272 of them, on top of all the buses and trams they run as well. There are five regular U-Bahn lines and four narrow-gauge lines. Those more narrow trains on the lines U1, U2, U3 and U4 are about as wide as trams. This is where a new train model known as A3L71 was introduced in 1971. It was the pride of West Berlin, also because it must have looked very modern.

From today’s perspective, cute would be the adjective that comes to mind. With their big round eyes, these old ‘U-Bahn’ trains look like owls. Back then, in the 1970s, taking ‘U-Bahn’ rides was a pleasure for smokers as well, because there were wagons reserved for them. The smoke concentration in the air must have been extremely high, until the end of the decade, when the tolerant smoking policy was finally thrown overboard.

Compared to its predecessors, the A3L71 had an advantage: It was a lot lighter because aluminum was used in the production process. Moving less weight required less powerful electric motors which used less electricity. Between 1971 and 1973, exactly 138 wagons were made and put on those narrow-gauge ‘U-Bahn’ tracks, including those above the ground, on elevated tracks in Berlin’s Kreuzberg borough. Today, ten of those wagons are left.

Apart from two trains of this model line, which the BVG intends to use as mobile workshops, the A3L71 will soon disappear. On Sunday, one of those old ‘U-Bahn’ trains was decorated, in order to celebrate the 50 years those ‘owls’ moved through West Berlin, and later through the reunited city. As it turns out, even aluminum can be affected by corrosion, which is why those A3L71 trains turned into moving scrap heaps over the years. At some point, fixing them did not make sense anymore, neither from a technical, nor from a financial perspective.

Three and a Half Astronomical Units

Some of the most-used wagons will have accumulated a very impressive mileage of 3.8 million kilometers (2.4 million miles), which is about three and a half times the distance between the Earth and the Moon.