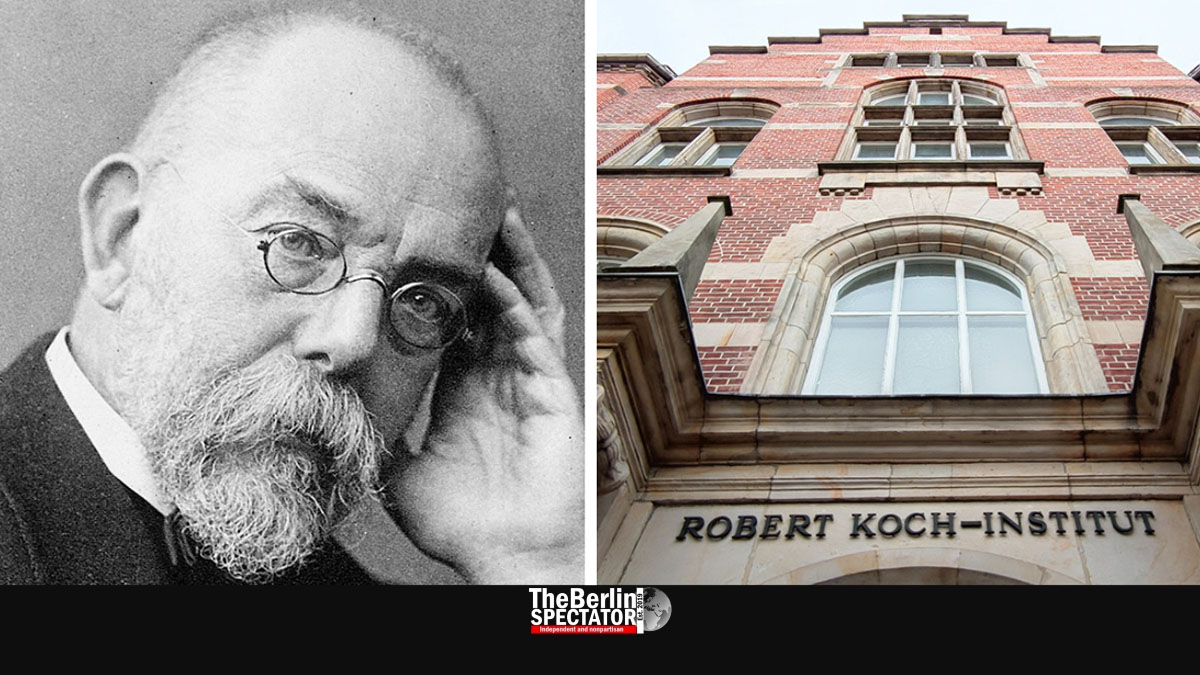 Since early 2020, the Robert Koch Institute has been mentioned in virtually all German media a million times, because of its role in the pandemic. But fighting Corona is not all the RKI does.

Berlin, January 6th, 2022 (The Berlin Spectator) — You are a major research institute for disease control and prevention, and a bad virus hits. What do you do? In this kind of situation, you will have to be on the case 365 days per year and 24/7 for as long as the problem persists. Since you are also a government agency, your task is to advise the Ministry of Health, the Chancellor and the entire cabinet, but also to document everything, come up with the latest numbers on a daily basis, and exchange findings with comparable institutes around the world. Getting rid of the damned virus is your overall task.

Whoever wants an easy job should run a plastic surgery clinic, a pizza parlor or a Volkswagen dealership, but not the Robert Koch Institute. Its President, Professor Lothar Wieler, a 61-year-old vet and expert for microbiology, feels the heat on a regular basis. Idiotic anti-vaxxers and Corona deniers hate him because Corona overwhelms them and they do not understand the fact that the RKI actually protects them. Wieler and his team are constantly being attacked by the yellow press as well. The latest accusation is that the RKI was spreading “chaotic numbers”. Professor Wieler has probably grown numb in regard to unfounded criticism of which there has been plenty in the past 24 months. He is being blamed for everything. The weather is bad? It’s Wieler’s fault. My chicken wing tastes stale and dry? Wieler is to blame. Corona hit us and keeps on mutating? Wieler is responsible.

His Robert Koch Institute has a museum that features the gigantic “travel microscope” its founder Robert Koch used in Africa and many other places he traveled to. Leisure was definitely not the motivation for his trips, but researching diseases. In several cases, those diseases researched him. For instance, he was infected with Malaria more than once. According to contemporaries who cooperated with him, he seemed wintry in his late 50s, at the beginning of the 20th century, probably because of all those viruses he had fought off.

Koch’s father was a nature researcher. As a child, Robert was introduced to the microscope and to the new field of photography. This was in the 1850s. Later, he studied medicine and specialized in pathology. In 1866, when Robert Koch was 23 years old, he got his first job. As an assistant doctor, he worked at a hospital in Hamburg. It did not take long until he headed a “madhouse” which was actually called that way near Hanover.

Throughout his career, Koch did research. In 1880, after he had presented impressive discoveries on anthrax and wound infection, he got to head the Imperial Health Authority in Berlin. Later, he presented Tuberkulin, a medication that was supposed to cure tuberculosis. Many people died from the disease back then. Unfortunately, the drug did not work. It even did damage. Once the “Tuberkulin scandal” broke, Robert Koch went to Africa for research. But his many findings got him the Nobel Prize anyway, in 1901. Koch dealt with everything, including typhus and cholera.

But even before, his work and determination paid off. Robert Koch wanted his own research institute, and this was exactly what he got. On July 1st, 1891, the Prussian Institute for Infectious Diseases was founded in Berlin. In 1942, thirty-two years after Koch’s death, Nazi Germany’s regime named it Robert Koch Institute (RKI). Of course, the Nazis used it for their sick experiments on humans at concentration camps. Hundreds were murdered.

After the war, in the 1950s, the RKI became part of West Germany’s Federal Health Authority. Another few decades later, after Germany’s reunification, several health authorities from the former GDR became part of the institute. At this stage, Corona is its most important task, but the Robert Koch Institute has many divisions. It does health reporting, runs a cancer registry, health surveys and truckloads of research projects. Money is not an issue since the state covers all bills.

So, when you are “the German government’s central institution for the identification, surveillance and prevention of infectious diseases in the Portfolio of the German Ministry of Health”, which is the official description, when your official sign features the federal eagle, and when something like the Coronavirus hits, leave the tennis court and go straight to the office. Stay there, for three years if necessary, until you defeat the virus. Every five minutes, the chancellery will call. The same applies to the Health Minister. When your spouse calls, have your secretary tell him or her you are not available for another year, or the calls will keep on coming in.

Many scientists are on the RKI’s payroll, but it does not employ psychics. That is why the institute classified the risk posed by the Coronavirus “minor to moderate” on February 28th, 2020, when the pandemic started creating problems. On March 17th, 2020, this grading was corrected to “high”. Since the first wave hit, the Germans have gotten to know Professor Lothar Wieler. He has appeared on their big screens in their living rooms countless times. He told them the nation needed to “press its rear cheeks together” and get vaccinated. Several times, when the federal government argued with a bunch of unreasonable First Ministers, Wieler called for tighter restrictions. On the screen. At the breakfast table. “Could you pass the Cheerios, Professor?”

The Robert Koch Institute is growing. It has some 1,150 employees 450 of which are scientists. In 2015, the RKI got an expensive present, namely a high security laboratory. Today, the institute has four locations, three of them in Berlin and one in Wernigerode, a nice place in the picturesque Harz mountains. Its headquarters are located in Berlin’s Wedding borough, right at the Spree river.

At the HQ, the RKI’s museum used to present all of those items that tell the institutes story, before it was closed because of the pandemic. It even has a mausoleum for its founder Robert Koch. He died on May 27th, 1910, during a cure he had started in Baden-Baden. On December 4th of that year, an urn with his ashes was placed in a large room, across the corridor from the big auditorium, behind a marble slab with a portrait of his.

Germany: Number of Omicron Infections Triples within a Week