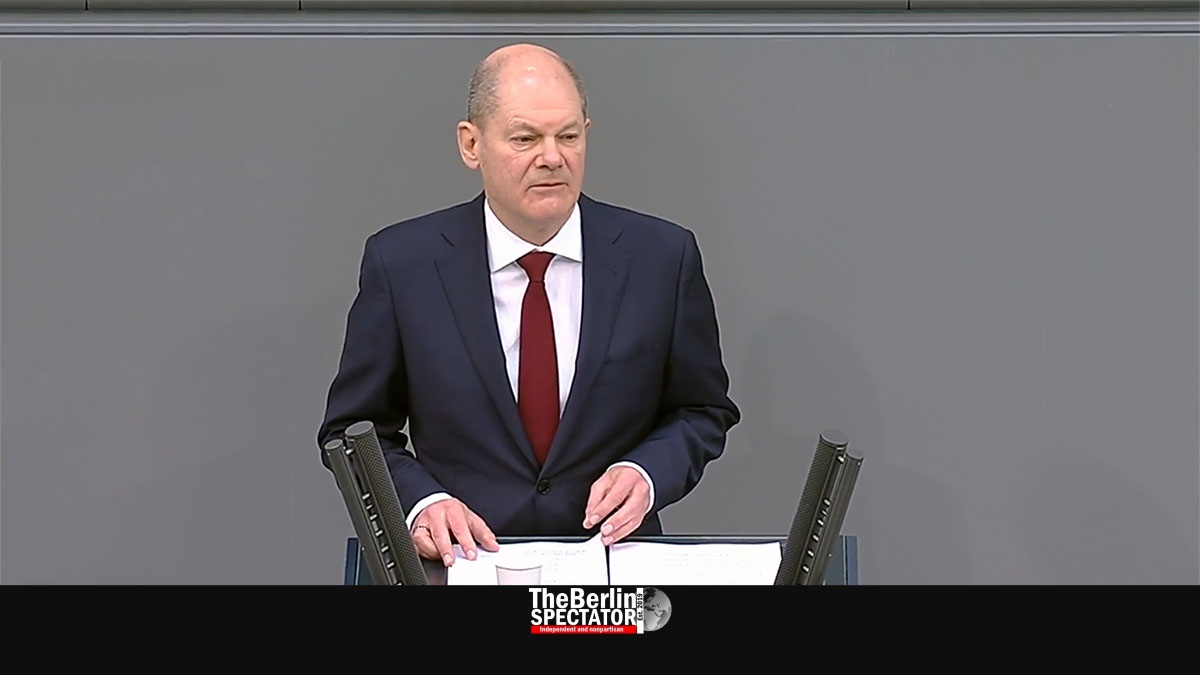 Three days after Russia started its attack against its neighbor Ukraine, the Bundestag discussed the war and its implications. War mongers like Vladimir Putin needed to be stopped, Chancellor Scholz told the MPs. He announced an increased defense spending.

Berlin, February 27th, 2022 (The Berlin Spectator) — “We are going through a turn of eras”, Olaf Scholz said at the Berlin Bundestag today. After Russia’s attack on Ukraine, the world would not be the same it had been before, he predicted. The plans the Chancellor announced will also change Germany.

‘We Will Defend Freedom’

Vladimir Putin was the one who had “started a cold-blooded aggressive war against Ukraine”, Olaf Scholz said. His official government statement on the situation was the beginning on a special three-hour session of Germany’s parliament. The war also was misanthropic, against international law and could not be justified by anything or anyone, he said.

The “terrible footage from Kiev and other cities” had shown the extent of the injustice of the ongoing war, Scholz stated. He said war mongers like President Putin needed to be stopped and made clear Germany was on Ukraine’s side. “Also, we want to – and we will – defend our freedom, our prosperity and our democracy.” Several times, Scholz got standing ovations. At the same time, MPs of the far-left ‘Die Linke’ and the extremist right-wing ‘AfD’ criticized him in interjections during the speech. Luckily, they were not audible too well.

Chancellor Scholz made four points which he said were important. Ukraine needed to be supported in this situation. For that reason, the federal government had decided to send weapons to Ukraine for its defense. “There could not be any other answer to Putin’s aggression”, Scholz stated. Putin needed to be warped away from his course of war.

This was why Germany and its partners were taking measures against Russia’s financial system. A plan to restrict the country’s access to the SWIFT wire transfers system was included here. The Chancellor said it was clear Putin would not change his course overnight, but the Russian leadership would feel the price it was paying rather soon. More sanctions could be implemented, Scholz said.

‘This War is Putin’s War’

The question which measures would hit those responsible for the war, rather than the Russian people, was important. Putin was the one who had decided to go to war, not the Russian people. “This war is Putin’s war”, he said, and got more applause. “Do not give up”, he told Russians who protested against the attack on Ukraine. “Freedom, tolerance and human rights will win through.”

Making sure the war does not spill over into other countries was Scholz’ third point. He announced Germany would live up to its duties in NATO. “Putin should not underestimate our resolve”, the Chancellor stated. “We will defend every square inch of the territory of our alliance.” He said the Bundeswehr, Germany’s armed forces, had already extended its support within the alliance, also by increasing its contingent in Lithuania. The military was also involved in the air policing mission in Romania. Scholz thanked all soldiers who are involved. “We will do whatever is needed to preserve peace in Europe”, he vowed.

Scholz’ fourth point was a surprise. After decades of arguments with the Americans about Germany’s defense spending, the Chancellor said the Bundeswehr needed more and stronger capabilities. In order to be able to deal with the threat Putin’s intention “to build a Russian empire” was posing, bigger investments were necessary. Freedom and democracy needed to be protected.

During his government declaration, he said as much as 100 billion Euro (112.7 billion U.S. Dollars or 84 billion Pounds Sterling) would be spent, because the Bundeswehr needed “aircraft that fly and ships that can be put to see”. He was referring to issues the German military has with its equipment. More than 2 percent of Germany’s gross national product would be spent on defense and on terminals for fluid gas. One of the goals Scholz mentioned is to become “more independent from certain natural gas providers”.

On top of it all, Scholz said Germany would strengthen its resilience by protecting itself against cyber attacks and by protecting its critical infrastructure. For this reason, and because of the climate crisis, the share of regenerative energy in the Federal Republic needed to be increased as quickly as possible.

For the opposition, Friedrich Merz of the CDU called Putin “a war criminal” and thanked Scholz for his government declaration. He said what Scholz had announced was the minimum of what needed to be done. Not only the tanks were a threat, Merz stated, but also the constant waves of propaganda Moscow was sending out.

Hundreds Killed in the War

Bärbel Bas, the Bundestag’s President, strongly condemned Russia’s attack as well. She welcomed Andriy Melnyk, the Ambassador of Ukraine to Germany, who was at the Bundestag to listen to the government statement and the debate, and told him the Federal Republic steadily stood with his country. Hundreds of people had already been killed in the fighting, Mrs. Bas said. A hundred thousand refugees were on the move.

On Saturday, the German government had announced a 180-degree turn for its policy on weapons exports to crisis regions in the case of Ukraine. Germany’s armed forces, the Bundeswehr, will send 500 surface to air Stinger missiles and 1,000 anti-tank weapons, “as soon as possible”, as a government spokesman stated. Furthermore, Aeroflot will not be allowed to use Germany’s airspace anymore. The European Union is also looking for ways to restrict Russia’s access to the SWIFT system for wire transfers.