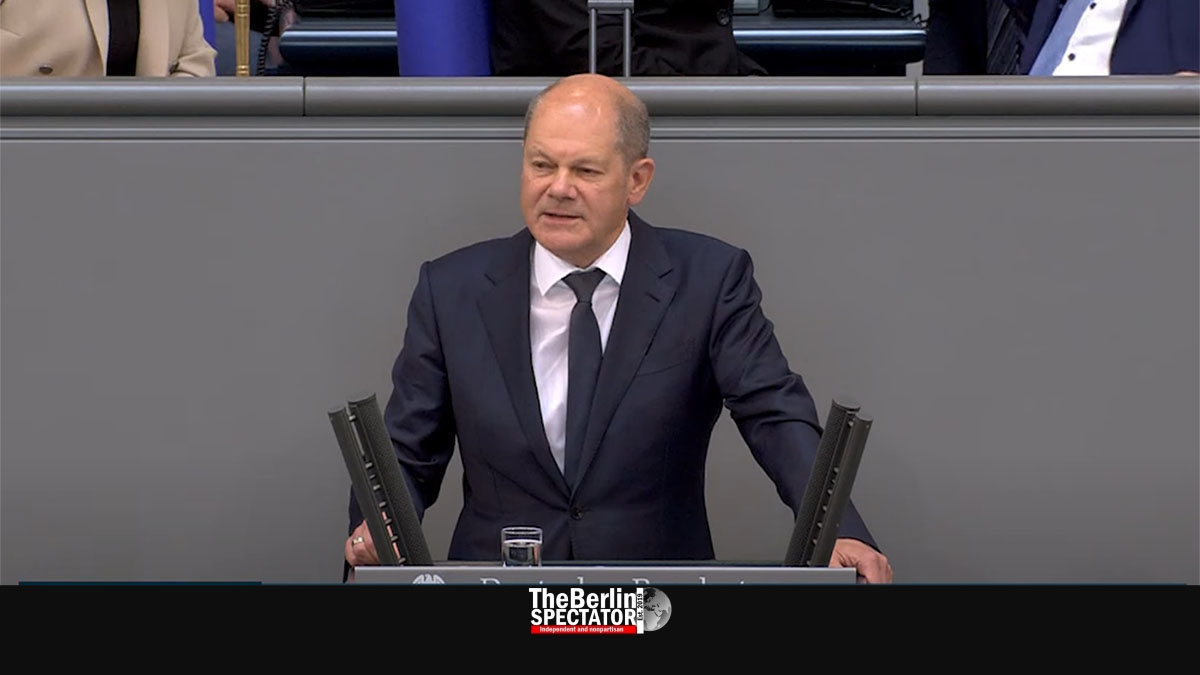 At the Bundestag in Berlin, Chancellor Olaf Scholz and opposition leader Friedrich Merz argued about Germany’s policy on Ukraine. Scholz got support from Foreign Minister Annalena Baerbock and former Chancellor Angela Merkel, who is a member of Merz’ conservative CDU.

Berlin, June 2nd, 2022 (The Berlin Spectator) — At the Bundestag, Friedrich Merz, the chairman of the conservative CDU and its floor leader in the German parliament, attacked Olaf Scholz on Ukraine. Merz accused the Chancellor of not saying things clearly enough. For instance, Scholz had said Russia should not be permitted to win its war against Ukraine, instead of directly stating that Ukraine had to win it. “Why don’t you say it?”, Merz asked him at the Bundestag. “Is there a second agenda?”

Dear readers: The Berlin Spectator needs your support.
Why is that? What are the options? Find out on our Donations Page.

Merz also said there was “only displeasure and disappointment” in the European Union about “the vague role” Germany was playing, as well as “irritation about you and your government”. He said a month after the delivery of weapons had been approved by the Bundestag, the Ukrainian army had not received anything. The “turning point” Scholz had announced shortly after Russia had attacked Ukraine in February had not led to anything.

Olaf Scholz countered Merz’ attack by accusing him of asking questions only while not taking any position on the matters at hand. He contradicted the accusations against him by listing weapons Germany had already delivered to Ukraine. The Chancellor also said it was presumptuous to discuss things in Germany that Ukraine needed to decide itself.

In his speech at the Bundestag, Germany’s head of government announced the delivery of the air defense system ‘Iris-T’ and a detection radar system to Ukraine. He said those systems would be sent as soon as the industry could “organize the delivery”.

In a television talk show on ZDF television, Foreign Minister Annalena Baerbock supported Scholz by saying Ukraine needed to win the ongoing war. Each person and each city needed to be fought for. “It could be us”, the Minister stated. Annalena Baerbock accused Moscow of breaking international law. And she said the fact that Kiev had not been conquered by Russia had to do with Germany’s weapons deliveries to Ukraine. The notion that Germany had not done anything was “absolutely not true.” Mrs. Baerbock predicted Ukraine would need to be supported for a long time.

Almost half a year after she left the Chancellery, Germany’s former Chancellor Angela Merkel commented on the war as well. During a speech she held at a farewell ceremony for the former union chairman Reiner Hoffmann, she said she did not want to give assessments from the sideline as a former Chancellor. But Russia’s attack on Ukraine was a “profound cesura” and a “breach of international law”. Mrs. Merkel stated she supported the efforts Germany’s government, the United States of America, NATO, the G7 and the United Nations were putting into stopping this “barbaric war of aggression”.