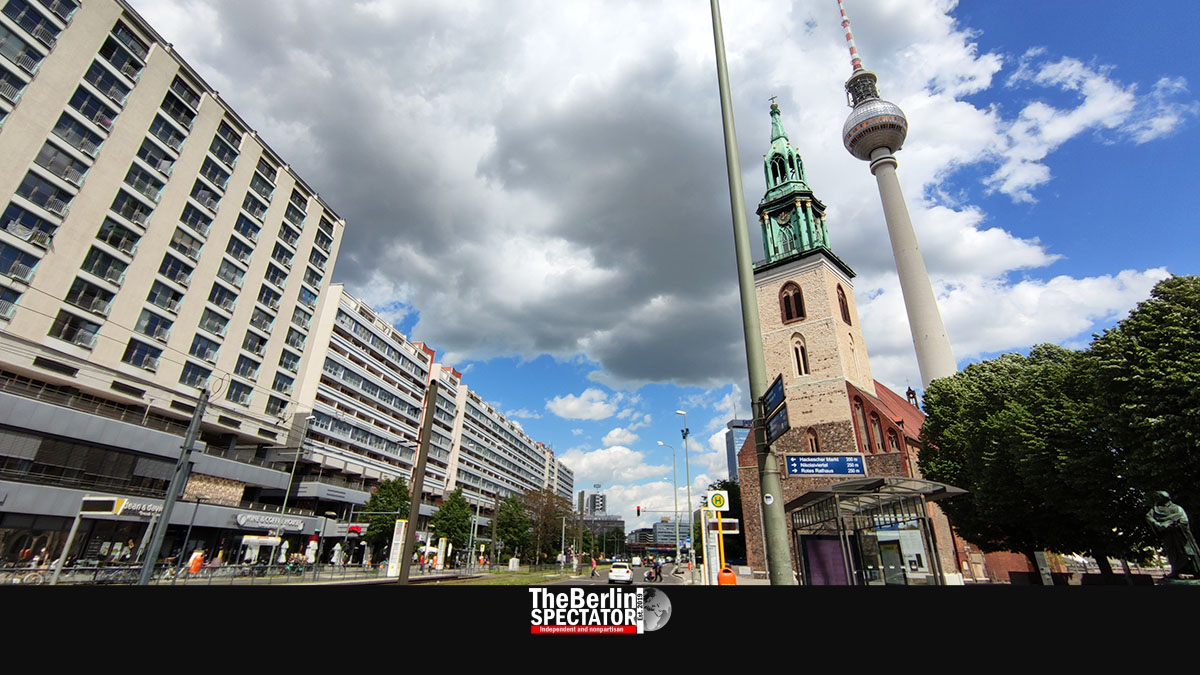 The tourists are back. Many of them came to Berlin during the Easter vacations. Now, even more visitors are arriving. Oh yes, the German capital is a tourist magnet again.

Berlin, June 4th, 2022 (The Berlin Spectator) — At Berlin’s Hackesche Höfe courtyards with its restaurants, pubs, exhibitions and artsy shops, a tourist invasion was going on on Friday afternoon. Every five minutes, another travel group entered the yards. The members of one of them wore headphones through which they got a never ending monologue about the location in their native language. When they were gone, a bunch of high school students showed up.

At other sightseeing spots, including Brandenburg Gate and Checkpoint Charlie, even more tourists were seen. Berlin is definitely back in business. ‘Visit Berlin’ is the name of the state-owned company that promotes the city as a tourist destination. According to a statement it sent out, a “positive trend” is being registered in regard to tourism.

These days, most visitors who arrive in Berlin are from other parts of Germany. But tourists from the Federal Republic’s nine neighboring countries are coming as well. Berlin’s hotels do notice the high demand, ‘Visit Berlin’ says. Some of them are fully booked for the long Pentecost weekend which just commenced. This is good news indeed.

“Tourism in Berlin is on a very good path”, ‘Visit Berlin’s CEO Burkhard Kieker stated. “People are attracted by our city again. The museums, other attractions and restaurants are benefiting from the level of bookings.” Kieker said he expected “a strong catch-up effect” in the upcoming summer as well. After two years of Corona, people just want to get out and see things. Obviously, Berlin is the perfect spot.

Will the number of tourists in Berlin hit the record that was reached in 2019? No. Back then, 14 million visitors from countless countries, and from within Germany, inhaled Berlin’s unique atmosphere. They partied, ate, drank, took sightseeing tours on the Spree river and the streets of the capital, they visited the city’s two zoos, its many concerts halls and the opera. In fact, there were so many tourists some Berliners even called for limiting their numbers. Not anymore.

At least the numbers are finally increasing again. Germany’s 9 Euro Ticket, which lets passengers travel the country on regional trains for an entire month, is an aspect that will make people visit places all over the Federal Republic, including Berlin. The gasoline rebate the government implemented to reimburse Germans for the high energy prices could help as well.

On top of it all, countless Germans and citizens of other countries fly in and out of Berlin like crazy. In May, 1.93 million passengers were counted at BER Airport in Schönefeld, Brandenburg, six times as many as there were in May of 2021. More than 15,000 aircraft landed and took off. In the first five months of this year, 6.7 million passengers either departed from BER Airport or arrived there.

These numbers are not bad, compared to 2021 and 2020. But in 2019, 35 million passengers used the former airports Tegel and Schönefeld. Since, they were closed for good and replaced by BER. In spite of the growing numbers, the new airport is in trouble. EasyJet decreased the number of flights it is offering to and from BER. Ryanair, the other big customer, is threatening to increase ticket prices substantially if BER Airport does not lower its fees, the ‘Tagesspiegel’ daily reports.

This is a bad moment for problems of this kind. The airport’s owners, namely the federal state of Brandenburg, the city state of Berlin and the Federal Republic of Germany, already need to pile up a lot of cash, 1.7 billion Euro (1.82 billion U.S. Dollars or 1.46 billion Pounds Sterling), to save BER Airport from drowning.