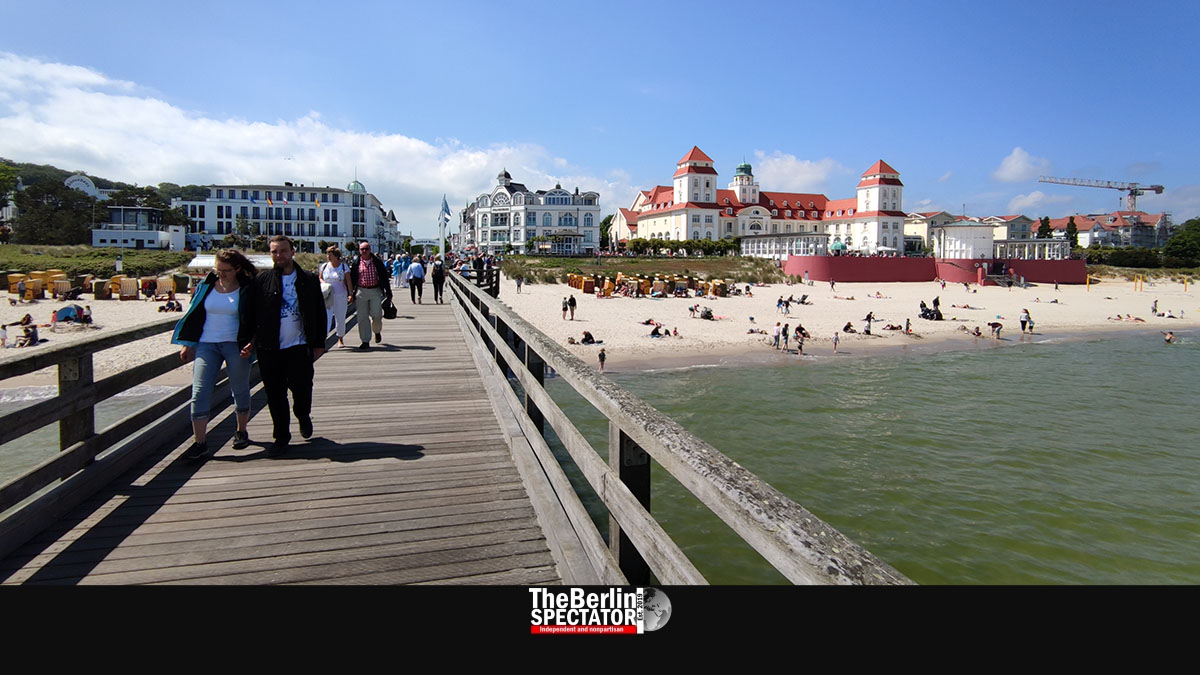 One of the human race’s big questions has just been answered: Is it possible to explore a Baltic Sea beach and visit Stralsund within 12 hours on Germany’s 9 Euro Ticket when you live in Berlin? Yes, it is. But, is it a good idea? No.

Berlin, June 5th, 2022 (The Berlin Spectator) — There are times when the worst idea is the best one. Taking the regional train from Berlin’s Central Station to Stralsund on Saturday at 6:32 a.m. was a bold decision. Everyone predicted it would be overcrowded, and it actually was. An entire city was on its feet early.

Hundreds of Berliners got up at ungodly hours in order to be at the station at around 6:15 a.m.. Only the quickest and most determined passengers got seats on Deutsche Bahn’s ‘Regional Express 3’, while the others were forced to stand for hours. Some people, including families with kids, sat on the stairs in the train’s double-decker carriages.

The passengers on this train had three things in common: They wanted to make use of their 9 Euro Tickets and have a good time up there in Mecklenburg-Hither Pomerania. Thirdly, all of those early risers from Berlin implemented a bad idea, including the author of these lines. Squeezed like oranges, we made it to the city of Stralsund in three hours and fifteen minutes. From here, the train to Binz, one of Germany’s Baltic Sea beach resorts, would leave. It was even fuller than the first one.

The passengers included one conspiracy theorist who refused to wear a mask. His stupid excuse: He did not have any. When he got a mask from The Berlin Spectator’s reporter, he did put it on after all. The expression on his face was priceless and everyone around him was relieved, including the conductress. She tried to keep the situation under control by shouting at passengers who were trying to put their bicycles on the train. It did not help.

A couple from Bavaria was on board the local train to Binz too. They said they had been attacked by insects during a one-hour hike through a nice forest. And there was Paul, the only four-legged passenger. The 16-year-old German shepherd mix from Berlin was eager to get out of the damned train more than four hours after his trip had commenced. His owner said they would live in their little hut, located in a tiny garden close to the beach, for a week.

Then, we finally reached Binz. From the station, the beach is only some five minutes away. Obviously, this is Germany, where absolutely everything has a concept, including the beaches of Binz. There are many “textile beaches” where wearing bathing suits, bikinis or trunks is mandatory. Only the visitors of the nude beach at the very end of the bay are exempt. With their little beach for nudists, the Binzers keep a German tradition alive. Especially people in the GDR were good at skinny dipping, and obviously still are.

At Germany’s North Sea and Baltic Sea beaches, people relax in beach baskets. In Binz, renting one for one day is 14 Euro (15 U.S. Dollars or 12 Pounds Sterling), an amount that is still a bit less than the Schnitzel with French fries at one of the cheaper restaurants around the corner. But the beaches are just the way we would expect them to be, namely sandy, salty and wet. The sand is white, just like in Puerto Escondido, Varadero or at the beaches of Delaware. But there is more wind and the water is pretty damn cold, for now. On the entire beach, only some five people had the courage to enter the water.

UFO at the Beach

Binz has countless elegant and rather expensive hotels, but also bed and breakfast places some of which had vacant rooms this Pentecost weekend, in spite of the stampede up there. The resort also has a UFO that serves as a registry office. The view from there is nothing less than stunning. Yes, Binz was crowded on Saturday, as expected. In the early afternoon, it was time to say goodbye to the resort. On the way back to Berlin, a short visit to Stralsund was on the program. (Read separate feature ‘Stralsund: The Marvel at the German Baltic Sea Coast‘)

The train back to Berlin was not crowded, but only because it left Stralsund early, at 4:41 p.m. CEDT. Of course, the later ones were crammed, as expected. So was Berlin’s Central Station. On Saturday at around noon, a ‘Regional Express’ train reportedly had to be evacuated by the police because too many 9 Euro Ticket tourists had entered it.

The Berlin Spectator needs your support.
What are the options? Find out on our Donations Page.