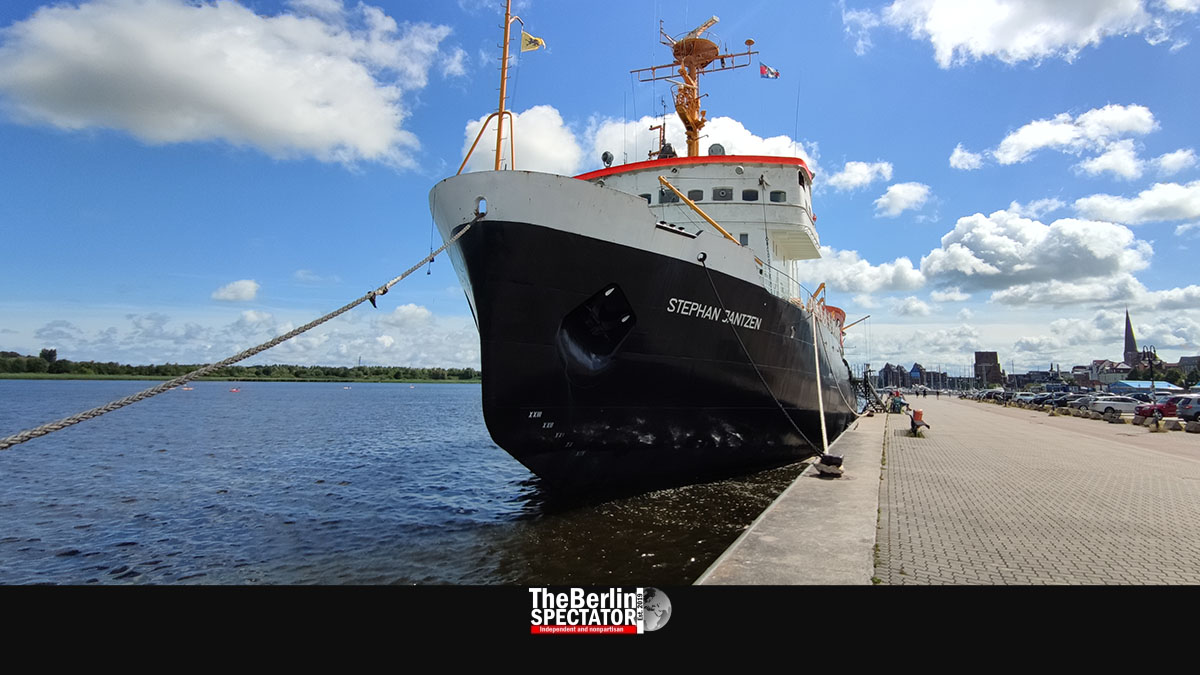 When you go to the Warnemünde beach resort at the Baltic Sea, you better hold on to your fish sandwich, or it will be stolen. But the sea water up there is fresh and clean. From Berlin, this nice spot is only three hours away.

Berlin, June 29th, 2022 (The Berlin Spectator) — The trip from Berlin Central Station commences at 6:42 on Tuesday morning, on Deutsche Bahn’s regional train ‘RE5’. Even on this weekday and at this early hour, it is full of Berliners who want to inhale some real air, see something different, and get the hell out of the big city at least for a little while.

Two hours and forty minutes later, Rostock appears, the Baltic Sea Marvel up there in Mecklenburg-Hither Pomerania. After a 10-minute walk to the New Market, the cake they offer at a local bakery looks too good to ignore. In this quiet atmosphere, it tastes better than it would have anywhere else. We have not seen the Baltic Sea yet, but we can smell it, and we hear the seagulls.

Rostock is all about water. In the year 1218, it got its town privileges. It did not take long until the city became part of the Hanseatic League because it’s traders made a fortune, thanks to it’s access to it’s port, which was the largest one in the GDR for as long as that country existed, seven and a half centuries later.

Before the GDR was founded, when the Nazis ruled Germany, two aircraft factories were operational in Rostock, until the Allies flattened them in air raids. Many medieval buildings were destroyed. Later, the gaps were filled with those typical 1950s apartment blocks which were not supposed to be beautiful, but functional, by accommodating workers and their families in the communist state the Soviets installed in their sector.

Today, 32 years after the unification, no German port registers more cruise ship visits than Rostock. On Tuesday, the impressive Viking Jupiter was there. It’s onboard Diesel generator provided the energy needed, judging from the smoke that came out if it’s chimney. At least it could not be smelled in Rostock’s city center. Here, the Baltic Sea breeze felt good.

The Church of St. Nicholas,, St. Mary’s Church, St. Peter’s Church, the remainder of the city wall with its towers and the Old Market are some of Rostock’s main sightseeing spots. So is the city’s industrial port, where the big vessel ‘Stephan Jantzen’ can be visited and admired from the inside. Kröpeliner Strasse, the main shopping street, is a nice pedestrian zone. It offers everything anyone might want.

Still, most of the tourists on the train from Berlin to Rostock neither cared about sightseeing nor did they appear in the city center. Instead, they boarded a local train to the most popular spot in Rostock, namely the truly nice Warnemünde beach resort. This is where the many Berliners with their 9 Euro Tickets end up.

Built by the communists, the big Neptun Hotel dominates the very wide beach up here. In spite of the rather low water temperature, dozens of people were courageous enough to swim in the Baltic Sea. Cowards, including the author of these lines, just cooled down their feet and faces in the sea water, which felt great too. Two nice lighthouses can be photographed up here. One of them serves as an observation tower as well.

There is yet another highlight: Before going back to Berlin, many day trip tourists consume those delicious fish sandwiches and other snacks they sell on little boats lined up along the promenade. There is nothing better. The calamari rings with garlic sauce tasted just as well as the young herring version of those sandwiches. Yummy!

But with every treat, the threat level grows. Thieves approach those tourists slowly. They are seagulls who already look very well fed and did not pay for those fish sandwiches. But they want them anyway. Why? Because. Fish sandwich vendors warn their customers by telling them to hold on to their snacks. The birds follow a smart strategy: First, they pretend they do not see you and just want to walk around. Then, while the tourists talk about sunscreen, the beach sand in their underwear and the advantages of the 9 Euro ticket, the birds strike. Your sandwich will be gone faster than you can say “Hey!”.

The regional train back to Berlin leaves at 4:24 p.m. and arrives at the German capital’s Central Station at 7:14 p.m.. A really nice day trip is over.